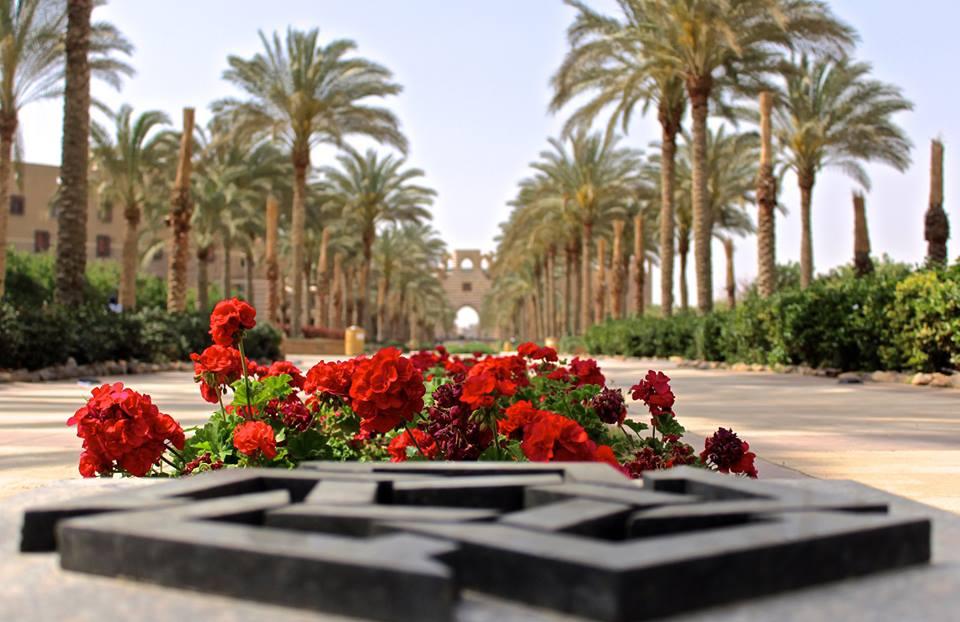 To submit your national/global award and recognition, click here.

For the second year in a row, Nine faculty members from the School of Sciences and Engineering have been included in the 2021 top 2% list of Elsevier for their research output and its impact.

Nageh Allam, professor of physics, Department of Physics, won the State Excellence Award in Advanced Technological Sciences 2019 to research the design and fabrication of nanostructured materials for energy application. The winning research mainly focuses on using such materials to harvest sunlight and convert it directly into electricity (solar cells) or indirectly to split water and generate hydrogen for use as a clean fuel. Equally important is energy storage, which was the second part of the winning research.

Hassan Azzazy, professor and chair of the Department of Chemistry, won the State Prize in Science and Technology 2019, organized by The Academy of Scientific Research and Technology, for their scientific contributions and achievements. Azzazy has been acknowledged for his multiple contributions to chemistry. He has over 30 years of experience in biomedical research and is the founder of AUC's Novel Diagnostics and Therapeutics research group, which has been developing innovative diagnostics for accurate and affordable detection of biomarkers of cancer and infectious agents, including hepatitis C.

Maha Bali, associate professor of practice, Center for Learning and Teaching, won the Award for Outstanding Volunteer Service from the Consortium of American Liberal Arts Institutions (AMICAL) outside the US in January 2021. The coordinating committee officers recognize the exceptional and sustained efforts Bali has made to support consortial goals and on behalf of AMICAL's member institutions and colleagues. In particular, they recognize Bali's contributions to committee work, community discussions, and event organizing, which stand out for her critical reflection, informed and relevant comments, and inclusiveness of spirit.

Kim Fox, professor of practice, Department of Journalism and Mass Communication, was awarded the Best of Competition award in the International Faculty Audio category for her short-form audio piece, "One Day in January 2011." This is the fourth consecutive year that Fox won a faculty audio award (2020).

Ali Hadi, distinguished university professor and chair of the Department of Mathematics and Actuarial Science, has been inducted as a fellow of The African Academy of Sciences (AAS) at the Annual General Assembly of the African Academy of Sciences (December 7-9, 2020, virtual). He was the only elected fellow in mathematical sciences. He was one of three Egyptian scientists inducted this year. The list of 224 fellows elected since 1985 indicates that Hadi is the first AAS Fellow in AUC’s history. The AAS fellowship recruitment follows a rigorous evaluation by the AAS Membership Advisory Committees (MACs) in various specializations.

Jamal Haidar, assistant professor of economics, Department of Economics, has been ranked by IDEAS-RePEc in December 2020 among the top 10 economists who completed their PhD in 2015. IDEAS-RePEc is run at the Federal Reserve Bank of St. Louis. In addition to his work at AUC's School of Business, Haidar is also currently a research associate at the Middle East Initiative, Harvard University.

Salima Ikram, distinguished university professor, Department of Sociology, Egyptology and Anthropology has been awarded the following:

Tania Kamal-Eldin, associate professor of practice, Department of the Arts has been awarded the following:

Sherif Kamel, dean and professor of management, School of Business has been awarded the following:

The startup company of Wael Mamdouh, associate professor of nanotechnology, Department of Chemistry, was selected as one of the winners of the Japan International Cooperation Agency (JICA) Next Innovation with Japan (NINJA) Business Plan Competition 2021.

A History of Arab Graphic Design by Haytham Nawar (AUC Press 2020) has won the Art History and Criticism category in the 2021 PROSE awards organized by the Association of American Publishers (AAP).

Mohamed Salama, associate professor, Institute of Global Health and Human Ecology, was chosen as a member of the Scientific Committee of the National Genome Project from the  Ministry of Higher Education and Research (2021). Among the committee's mandates are planning the project, reviewing the progress, and submitting reports to the Egyptian Genome Council.

Bahia Shehab, professor of design, Department of Arts has been awarded the following:

Nermeen Shehata, associate professor, Department of Accounting received the Abdul Hameed Shoman Arab Researchers award 2020 in the economics and administration sciences category on the topic “Financial Solutions and Creative Innovations in Emerging Markets” for her research on corporate governance and its impact on the development of capital markets, especially in emerging economies.

Ashraf Sheta, visiting assistant professor, management department, won the second prize award for the Emerald-KCC case writing competition on February 3, 2021, from the Emerald publishing - Khazindar case center. The award for case writing in the field of the family business.

Ten faculty from the School of Sciences and Engineering have been recognized among the top two percent impactful scientists globally in a report issued by Stanford University. Using Elsevier’s abstract and citation database, called Scopus, the University compiled a list of over a million scientists from 149 different countries. The AUC faculty included on the list are:

Ibrahim Abotaleb, assistant professor of, Department of Construction Engineering, won the Thomas Fitch Rowland Prize from the American Society of Civil Engineers - Construction Institute 2020. The prize is awarded once a year by the Construction Institute of the American Society of Civil Engineers; the oldest, largest, and most prestigious civil engineering society in the United States. The award is given to the authors of the highest quality journal paper after passing through a series of nominations and recommendations by the key academic community of construction engineering and management.

Mona Amer, associate professor, and chair of the Department of Psychology:

HossamEldin Attiah, a senior instructor of rhetoric and composition, received the Excellence in Teaching Award from Notting Hill College, the UK, based on his excellent evaluation.

Ibrahim Awad, professor of practice in the Department of Public Policy and Administration and director of the Center for Migration and Refugee Studies, was awarded the Officer Cross of the Order of Isabella the Catholic, which honors Spanish and foreign personalities who have worked to strengthen Spain's relations with the international community.

John Baboukis, professor of music, Department of the Arts, has been awarded honorable mention for the American prize in Composition in the orchestral category for his Symphony for Cairo. The competition included thirty semi-finalists, twenty-six finalists, and ten honorable mentions. The competitions of The American prize are open to all US citizens, whether living in the US or abroad, and to others currently living, working, and/or studying in the United States of America.

Teklu Bekele, associate professor at the Department of International and Comparative Education, is the winner of the 2019 Outstanding Author Contribution Literati award, by Emerald Publishing, for his published work on context analysis.

Catarina Belo, associate professor, Department of Philosophy, received a 2019 Sheikh Hamad Award for Translation in December 2019. The award was in recognition of the excellence of her translations of several medieval Arabic and Islamic philosophical texts from Arabic into Portuguese.

"The Japanese Government Bestows Nabil Fahmy, Egypt's former Foreign Affairs minister and Founding Dean of the School of Global Affairs and Public Policy with Grand Cordon of the Order of the Rising Sun of the First Degree. The conferment ceremony will be held on the 6th of November, 2019; Dean (inside) and Minister (outside) Fahmy will be granted the prestigious decoration conferred by His Majesty Emperor Naruhito of Japan. This decoration is awarded to those who have advanced their fields, made significant achievements in international relations or the promotion of Japanese culture, or contributed to development in welfare or conservation."

Kim Fox, professor of practice, Department of Journalism and Mass Communication, has been announced as the recipient of two BEA Festival of Media Arts awards as executive producer for the Ehky Ya Masr Podcast.

Atta Gebril, associate professor, Department of Applied Linguistics, is one of two AUC faculties out of 10 scholars nationwide who received a Scopus award on October 30, 2019. The award is for the top researcher in 10 broad fields across the humanities, social sciences, sciences, engineering, and health, based on scholarly impact metrics (H-index, field-weighted citation impact, number of publications) over the five-year period of 2014 - 2018.

Nelly Hanna, distinguished professor, Department of Arab and Islamic Civilizations, was honored as “Historian of the Year” in Tunisia in November 2019 at the annual conference held by the Tunisian Mediterranean Association in Monastir, where a festschrift in her honor was also launched. Trade and Traders throughout History: Papers Offered to distinguished university professor Nelly Hanna, edited by Ibrahmi Muhammed Saadoui, was published by the Tunisian World Center for Studies, Research, and Development, 2019.

Tania Kamal-Eldin, associate professor of practice, Department of Arts, won the Award Winner/Short Film from the Mister Vorky Film Festival on May 31, 2020

Maria Papanikolaou, assistant university archivist for records Manager, Rare Books, and Special Collection Library, recognized as the ICA New Professional in June 2019 from the International Council on Archives (ICA): The ICA is an international organization and the leading international professional association in the fields of archives and records management. The aim of the ICA is to promote the management and use of records and archives, and the preservation of the archival heritage of humanity around the world, through the sharing of experiences, research, and ideas on professional archival and records management matters and on the management and organization of archival institutions.

Ashraf Sheta, visiting assistant professor, Management Department, won the 2019 Case Writing Competition from the European Foundation for Management Development EFMD on June 2, 2020. The case revolves around Technology Park Company, a privately owned company operating in the IT field. Telling the entrepreneur's story, the case moves through a timeline that takes the readers on his success journey, including challenges, speed bumps, and family business-related concerns pertaining to the Egyptian context, such as succession, partner involvement, and separation of ownership and management.

Noura Wahby, assistant professor, Department of Public Policy and Administration, won the Malcolm H. Kerr Dissertation Award from the Middle East Studies Association (2019). Wahby's thesis on regimes of governance in Cairo's urban water systems is a masterful example of theoretically rich, methodologically sophisticated, interdisciplinary research that is solidly grounded in painstaking fieldwork. Wahby's work sheds crucial light on urban water politics as a site of negotiation, accumulation by dispossession, and protest. The process compels readers to engage with critical questions about citizenship, class, and the state in the contemporary Middle East.

Malak Zaalouk, professor of practice at the Department of International and Comparative Education and the director of the Middle East Institute of Higher Education, was honored with an award from the European Union to strengthen EU-Egypt Cooperation in Research, Innovation and higher education in November 2019.