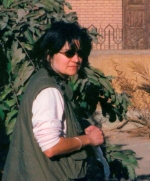 Tania Kamal-Eldin is an accomplished filmmaker and educator with an MFA in visual arts from the University of California at San Diego, UCSD, where she was awarded the Jacob Javits Fellowship. Her productions have an international audience and are distributed by Women Make Movies, Inc. and Typecast Film Distribution. Her work has been screened in competitive festivals worldwide and has been broadcast on public television and cable stations.