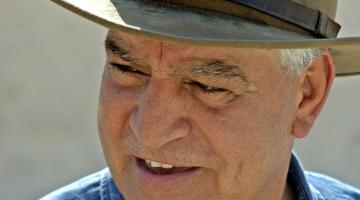 World-renowned archeologist Zahi Hawass has served at most of the archeological sites in Egypt during his career. He began as an Inspector of Antiquities and rose to the height of the profession in Egypt, becoming the Secretary General of the Supreme Council of Antiquities, as well as the first Minister of State for Antiquities.

He received his BA from Alexandria University in Greek and Roman archeology and a diploma in Egyptology from Cairo University. His MA and PhD were granted by the University of Pennsylvania, where he studied as a Fulbright fellow. Additionally, Dr. Hawass has received seven honorary doctorates from various foreign universities.

He has written more than 40 popular and academic books and more than 150 scholarly articles on his excavations, as well as innumerable pieces for Arabic and English newspapers and magazines. The most popular of his books are Secrets from the Sand (Doubleday) and Valley of the Golden Mummies (Henry Abrams), which became a bestseller. He wrote one of Egyptology’s most opulently illustrated books, A Secret Voyage, of which only 900 copies were printed. He has presented them as gifts to many dignitaries, heads of state, and royalty.

Another of Hawass’ popular books for a general readership appeared in 2014, Discovering Tutankhamun: From Howard Carter to DNA. In addition, he published a volume about his work using computed tomography (CT scanning) and DNA analysis on Egypt’s royal mummies, as well as a children’s book titled King Tut and I: The Mystery of the Golden Boy.

Through the course of his career he has made a number of major discoveries, including the tombs of the pyramid-builders at Giza and the Valley of the Golden Mummies at Bahariya Oasis. He also discovered two new pyramids: One belonged to Khufu, and the other to the mother of King Teti, founder of the Sixth Dynasty. He directed the first Egyptian excavation in the Valley of the Kings, where he and his team not only discovered many important artifacts but also rediscovered one of the valley’s “lost tombs,” KV 53. Dr. Hawass’ efforts also revealed the secret of the tunnel in the tomb of King Seti I. Along the nearby Theban West Bank, he led a team that excavated the northern entrance to the temple belonging to Amenhotep III. Many statues were found there, belonging to this powerful king in the company of a variety of deities. At Giza, he directed a scientific research team that used a robot to search for secret doors inside the Great Pyramid of Khufu. He is also currently directing an Egyptian team to excavate at the Valley of the Monkeys on the west bank of Luxor to search for hidden tombs in the area. In addition, Dr. Hawass is the Head of the Scientific Committee that is assigned by the Ministry of Antiquities to supervise the Scan Pyramids project.

One of Dr. Hawass’ most important endeavors has been the Egyptian Mummy Project, which uses modern forensic techniques, including CT scans and DNA analysis, to answer questions about human remains from ancient Egypt. The EMP has resulted in

several crucial findings, including identifications of the mummy of Queen Hatshepsut and members of the family of Tutankhamun, and the cause of death of Rameses III.

As an archeologist deeply concerned with the conservation and protection of Egypt’s monuments, Dr. Hawass supervised an extensive site management program for Coptic and Islamic sites. He also oversaw the conservation of the Great Sphinx and built 22 new museums throughout Egypt, among them the Grand Egyptian Museum near the Giza pyramids and the National Museum of Egyptian Civilization in Fustat. He also repatriated more than 6,000 stolen artifacts and trained more than 1,000 young archeologists in museology and excavation techniques.

Dr. Hawass is known for his charisma and ability to reach out to the public, raising awareness of archeology and the preservation of Egypt’s precious heritage. He lectures internationally, with some audiences exceeding 4,500 attendees. Through these talks, he introduces his most important discoveries to the world. His dynamic personality and extensive knowledge have sparked global interest in ancient Egypt. He has brought the world of the pharaohs into the homes and hearts of people everywhere through numerous television appearances and books for the general readership. In 2006, Dr. Hawass received an Emmy Award from the Academy of Television Arts and Sciences for a documentary on ancient Egypt produced by KCBS in Los Angeles. Some of his most popular TV appearances have been “Mysteries of the Pyramids: Live from Cairo with Omar Sharif,” “Good Morning America live from the Great Sphinx with Joan Lunden,” and the “Today Show with Matt Lauer.”

He has appeared, also, in three live, prime-time productions for Fox Television. The first of these, in March 1999, was with Maury Povich; the second, in May 2000, was with actor Bill Pullman and host Hugh Downs; and the third was a look behind the hidden doors within the Great Pyramid through the use of a robot equipped with a fiberoptic camera. Dr. Hawass has also appeared in many documentaries produced by the BBC, Discovery Channel, National Geographic, the History Channel, PBS, and Nova, as well as many programs in Europe and Japan. One of the most famous TV shows is (Chasing the Mummies) by History Channel. The TV show was watched by millions of people all over the world.

He was chosen by the BBC for a profile representing Egypt in the new millennium and was featured by CNN in a short profile in 2008. National Geographic has produced a film on his life and work. He has been profiled in print by the Los Angeles Times, the New York Times, and the Times of London, as well as other major newspapers and magazines.

Dr. Hawass has been instrumental in sending exhibitions of the treasures of King Tutankhamun abroad. The exhibit has toured many cities in America, Australia, Europe, and Japan, bringing more than $125 million in revenue to Egypt. Forthcoming, is another exhibit of the treasures of Tutankhamun, “Tutankhamun: Treasures of the Golden Pharaoh,” will be launched in March 2018.

Over the course of his career, Dr. Hawass has received numerous awards and honors. In 1998, the President of Egypt bestowed on him the First Class Award for Arts and Sciences, and he also received the Pride of Egypt Award from members of the foreign press in Egypt. Two years later, the Association of Egyptian-American Scholars named him Distinguished Scholar of the Year, and he was one of 30 international figures to receive the Golden Plate Award from the American Academy of Achievement in honor of his accomplishments in archeology. In July 2001, the National Geographic Society selected Dr. Hawass as one of its Explorers in Residence, and the Russian Academy of Natural Sciences granted him a Silver Medal and membership in the academy. During November of the next year, his name was inscribed on a CD carried by the 2003 mission of the Mars Exploration Rover. Time magazine chose him as one of the Top 100 Most Influential People for 2006. The following year he was made an officer in the French Order of Arts and Letters, and in 2008, he received the rank of commander in the Order of Merit of the Italian Republic. That same year, Dr. Hawass was presented with a World Tourism Award and designated a Goodwill Ambassador to Japan by the Egyptian and Japanese Ministries of Foreign Affairs. Dr. Hawass is now working with the Ministry of Tourism to promote travel to Egypt, and he has recently lectured in Canada, Germany, Switzerland, and Britain. Dr. Hawass was named in April 2017 Ambassador for Peace and Cultural Heritage by the International Federation of Peace and Sustainable Development, an affiliate organization to the United Nations. In July of the same year, he was awarded the Honorary Doctorate Degree from San Ignacio de Loyola University in Peru. He was the guest of honor at the Magna Gracia Film Festival in Catanzaro where he was awarded the Golden Pillar Award. He is named "Man of the Year" by Telemed Foundation in October 2017, as well as, being awarded the Social Commitment Award in Milan and the Capo Circeo award for culture in Rome.