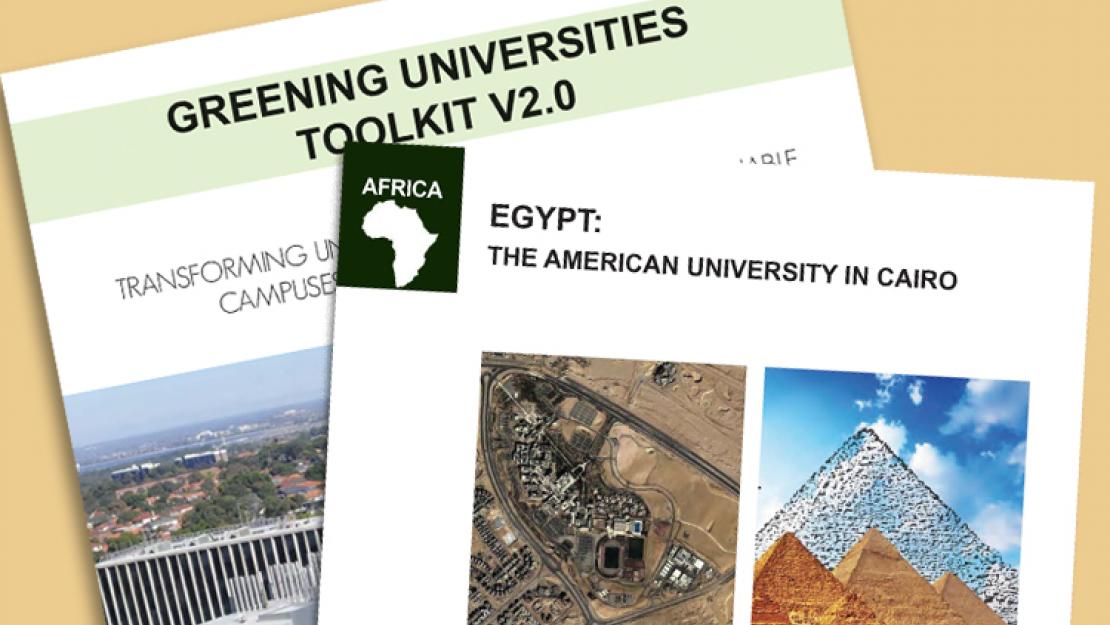 AUC’s sustainable campus practices have been featured in the United Nations Environment Programme’s (UNEP) Greening Universities Toolkit as a global example of a green, low-carbon institution. AUC is one of only two universities from Africa featured in the toolkit.

This is not the first time that AUC achieves a global “green” ranking. AUC is the only higher education institution outside of North America that has been named to The Princeton Review’s 2015 Green Colleges Guide, which highlights the “most environmentally responsible green colleges.” AUC has also been ranked in the  top third worldwide in the University of Indonesia’s GreenMetric World University Ranking for two years in a row (2014 and 2015).

“This shows that AUC is already gaining a global reputation as the top green University in the Middle East and North Africa region,” noted Yasmin Mahmoud, AUC’s sustainability officer.

Mahmoud is eager to pass on the knowledge. “Other institutions may have seen us listed in other publications for our green initiatives, but the UN Green Universities toolkit has a detailed explanation of our strategic plan that can be adopted by other universities,” she said.

The toolkit, now in its second edition, is designed to outline the strategies of leading green universities to inspire similar institutions to better utilize resources and reduce their energy consumption and carbon footprint. It contains several chapters on strategies, tools and resources for universities to create a framework for sustainability planning and management. It also provides detailed best practice case studies from 28 universities around the world to inspire higher education institutions to address their own sustainability challenges with real-life examples of initiatives that have already proven to be successful. The hope is that sharing this information will spark a chain reaction of dedicating resources to build a more sustainable world, starting with the university.

Mahmoud pointed out that public outreach efforts to explain the motivation and mechanics behind green initiatives is essential for success. “In order to get everyone onboard with your sustainability strategy, you need to educate them and explain why you are making changes and how it will improve the University’s operations, strengthen its finances and enhance its reputation not only at the regional level, but globally as well,” said Mahmoud.

The toolkit is an opportunity for AUC to contribute to a more sustainable world and to learn tactics from other universities to implement in future projects. “We can reach out to other universities globally and compare how we are doing,” Mahmoud explained.

The toolkit, first published in 2011, is part of the Greening Universities Initiative of the UNEP’s Environmental Education Training Unit, which works in cooperation with other UN agencies and leading experts in sustainability.