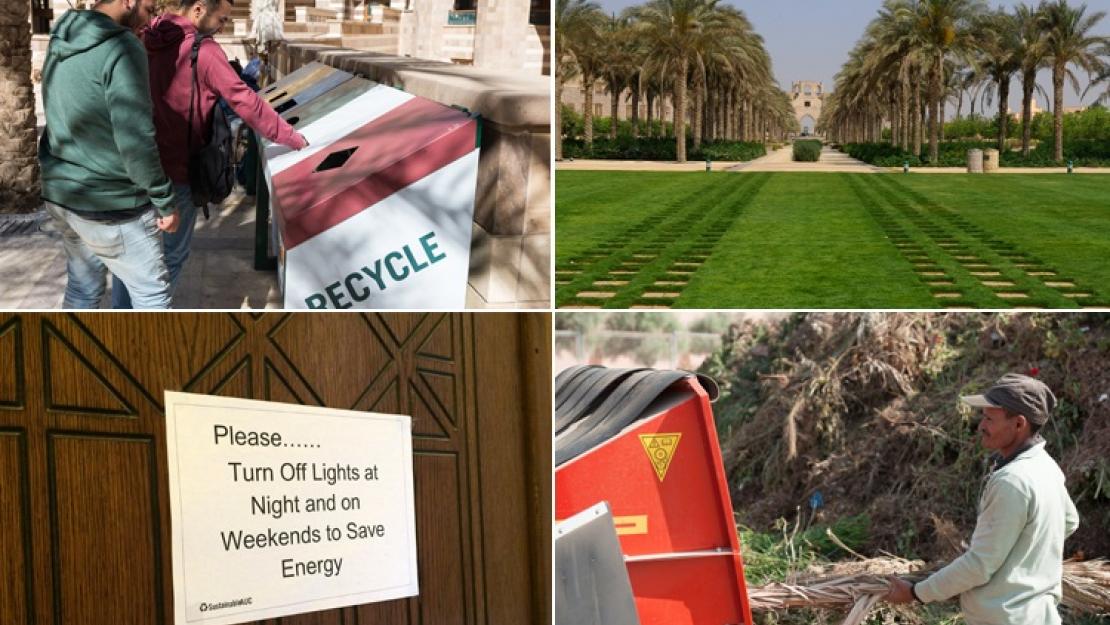 For the second year in a row, AUC has been ranked in the top third worldwide in the University of Indonesia’s GreenMetric World University Ranking. AUC ranked 105 out of 360 overall, coming in 22nd in the energy and climate change category and achieving a perfect score of 1,000 points in the water usage and conservation category.

The ranking comes as the University continues to build on past sustainability successes, such as reducing energy use by more than 35 percent over three years and using exclusively recycled wastewater for irrigation of campus landscaping.

“We are one of a small number of universities using more recycled wastewater than freshwater, because irrigation uses more water than any other use on campus and we are able to use exclusively treated wastewater for irrigation,” affirmed Sustainability Director Marc Rauch. “In every month in 2014, we used more recycled water than fresh, and there was only one month when we had to use any fresh water at all for irrigation. In a country like Egypt, where we have a condition of permanent water scarcity, this is pretty significant.”

The University has also made progress in waste management, adding 31 mini-stations to the 13 main sorting stations for waste and recyclables, and increasing collection of recyclable materials such as plastic and metal. The production and use of compost on campus has also increased, with the landscaping team in the Office of Facilities and Operations bringing tree, ground cover and grass trimmings to their compost production facility where the compost is turned and tended until it is ready for landscaping use.

“The compost is used as fertilizer, substituting for synthetic fertilizer that is expensive and that releases much more in the way of greenhouse gases into the air,” noted Rauch. “Mixing compost into the soil also helps the soil retain water, which will enable us to reduce the amount of water used for irrigating the campus landscaping. AUC’s composting operation is a great example of natural re-use and recycling.”

Carpooling has also increased dramatically, according to an online survey conducted in 2014, and the Office of Sustainability is currently working on the third Carbon Footprint report, which will show trends over the last three years, rather than just focus on one year as in previous reports.

The Research Institute for a Sustainable Environment (RISE) continues to engage students, faculty and staff through initiatives such as Adopt-A-Plot community farming, the Sustainable Campus days, the Living-Learning-Lab and the RISE Seminar Series. “We have more than doubled what we are doing on campus,” said Richard Tutwiler, RISE director. “There are 300 students a year involved in the Living-Learning-Lab as volunteers or work-study, and we have 60 to 70 people involved in Adopt-A-Plot. We are also doing research on soil and water-plant relationships in this environment, along with a lot of work off campus.”

RISE recently installed a solar panel array to power its hydroponic greenhouse system as part of the Living Learning Lab, and has done significant work to highlight the amount of trash that is produced.

Further integrating sustainability and consciousness of environmental concerns into the AUC curriculum, the Center for Sustainable Development (CSD) launched the interdisciplinary Master of Science and graduate diploma in sustainable development, the first-of-its-kind in the Middle East and North Africa, in 2013. The center brings together the different academic schools at AUC to work toward the common goal of promoting sustainability in education and positioning AUC as a platform where researchers can work on sustainable development issues and make regional and international connections.

“The CSD operates based on three main pillars: education, research and community service,” said Hani Sewilam, director of the center. “Under education is the graduate program, which is offered by four schools — School of Sciences and Engineering, School of Business, School of Global Affairs and Public Policy and School of Humanities and Social Sciences. This is important because the content is interdisciplinary. For example, you cannot separate agricultural problems, food production and poverty from water and energy.”

The center has received funding from the European Union to fund the Master of Science program and create a double degree with Politecnico di Milano. Students from the AUC are already studying under this cooperation in Milano.

Under the research pillar, the CSD is engaged in another project on the water-energy-food nexus, also funded by the European Union, as well as partner universities and organizations from across Egypt and Europe. The center is also in the final phase of developing a 21st-century research model that enables using solar energy for seawater desalination to produce irrigation water to be used for agriculture and food production. The model should be also functioning as Zero-Liquid-Discharge, which is a great demonstration for green technologies.

CSD also continues to provide service for the Egyptian community through several initiatives such as EduCamp II project, which started five years ago and aims to inject sustainable development into the Egyptian public school curriculum. In its first phase, Sustainabel Development school curricula have been developed and the implementation in the schools is the core of its second phase. “The Educamp program is now implemented in different schools in El Warraq slum area,” Sewilam noted. “Teaching kits are available free of charge and are in high demand, and we also have a teacher training program.”

The University of Indonesia launched the GreenMetric World University Ranking in 2010 with the stated aim of contributing to the discourse on sustainability education and “green” campuses and encouraging universities to lead the charge toward achieving sustainability goals. The number of schools participating in the ranking has increased every year, reaching 360 in the 2014 ranking.

In order to achieve this year’s ranking, the Office of Data Research and Analytics completed a comprehensive survey, with help from several AUC offices and departments. The survey questions were broken into six categories: setting and infrastructure, energy and climate change, waste, water, transportation and education. All of these categories were considered by the University of Indonesia to arrive at the rankings.

Photo caption: Sorting stations, land composting and energy efficiency awareness signs are some of the measures taken by AUC to foster sustainability and integrate it into everyday campus practices