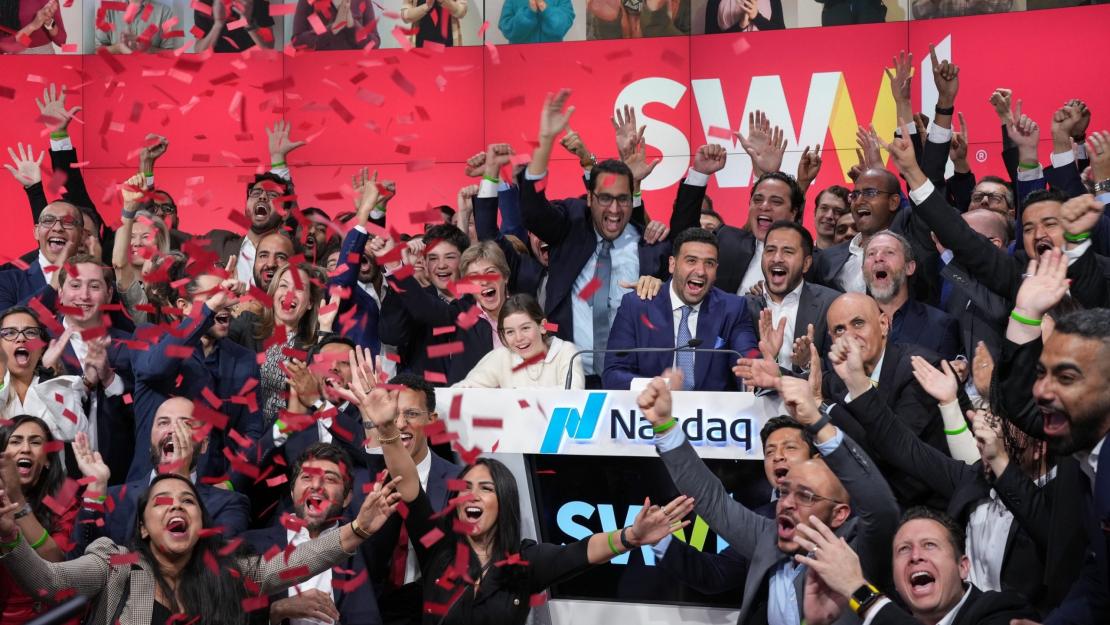 Just five years after joining the AUC Venture Lab as a budding startup, Swvl has made its debut on the Nasdaq ––  the first Egyptian unicorn, first V-Lab graduate and first North African tech startup to list on the U.S. stock exchange.

Entering the exchange next to other tech giants with a valuation of $1.5 billion, the fast-growing transportation company is also the second in the Middle East to list on Nasdaq via a SPAC (Special Purpose Action Committee) merger, following Anghami. The company merged in July of last year with Queen’s Gambit Growth Capital, a SPAC that boasts  being 100% female-led.

Kandil rang the Nasdaq Opening Bell on March 31 in a ceremony marking the company’s debut.

"We are very excited to see Swvl's team reach this inspiring milestone,” said Ayman Ismail ’95, ’97, founding director of the V-Lab and associate professor and Abdul Latif Jameel Endowed Chair in Entrepreneurship. “At AUC Venture Lab, we take pride in having been part of Swvl's early journey and continue to be committed to being a catalyst for growth and to empowering more inspiring founders during their journeys. [Swvl is] “an inspiration to many entrepreneurs and one that paves the way for an entire generation of tech startups.”

Kandil began his studies as a petroleum engineering student at AUC but ended up seeking a more dynamic path, as he was always keen on exploring the business world. In 2017, Swvl joined AUC Venture Lab, Egypt’s first University-based accelerator and incubator which offers acceleration programs to high-growth, innovation-driven tech startups.

In August 201, when Swvl announced that it would list on the Nasdaq, Kandil said, "I’m proud to say that being an AUC student was the start of the journey that brought me to this moment in my life."

Accelerated by the V-Lab in Cycle 8, the team was able to launch the application before graduating from the cycle. The startup has seen impressive growth since its launch, crossing Egypt’s borders and establishing roots abroad. Kandil was named — along with co-founders Nouh and Sabbah — among Forbes Middle East’s Top Arab 30 under 30 in 2018.

To date, the V-Lab has graduated over 300 graduate startups that have gained EGP 3 billion in investments and created 10,000 jobs, leaving a lasting impact on the greater community and regional development ecosystem. In 2021, the lab was recognized as the Best Accelerator/Incubator Program in North Africa by the Global Startup Awards.