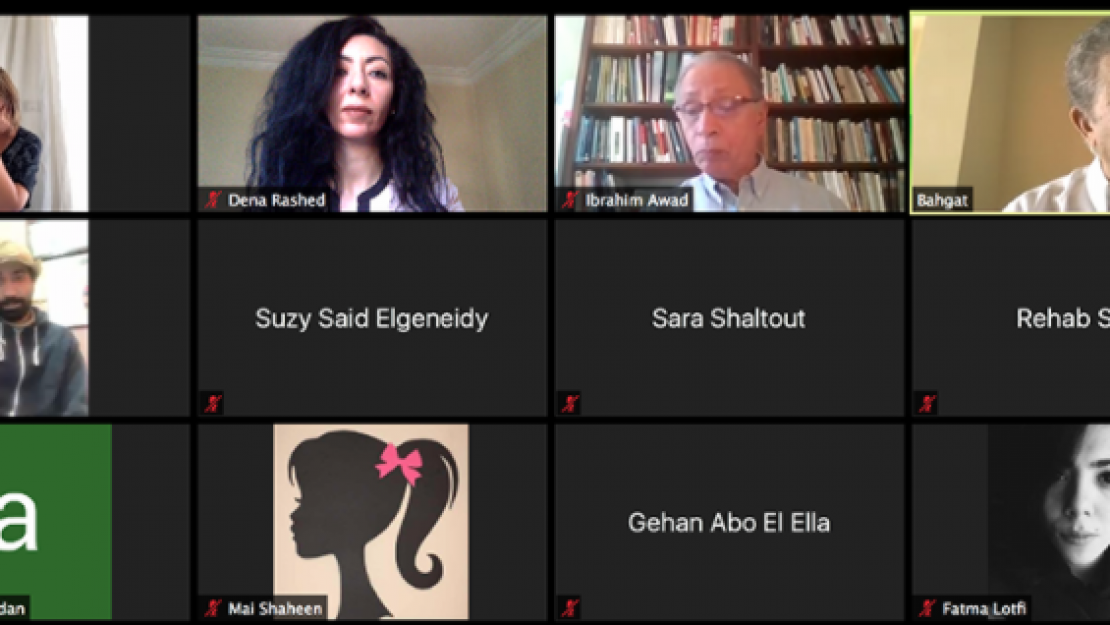 "The question now is: Who will lead the world? After China's domination, Europe dominated the 19th century, and then the U.S. dominated the 20th century, but that will change with Asia dominating the 21st century," said Bahgat Korany, professor of international relations and political economy and director of AUC Forum, at AUC's second Virtual Media Discussion, "The World Order Post COVID-19."

At the discussion, Ibrahim Awad, professor of practice in global affairs and director of AUC's Center for Migration and Refugee Studies, argued that the United States is unable and unwilling to lead internationally and bear the costs of such leadership. At the same time, China cannot lead the world: "We are now in a completely new situation, where there is no overall dominant power, but rather a competition of an economic nature, not a military one, as was the case with the Soviet Union. Many say that Europe is not interested in engaging in a cold war with China. European countries will not be easily drawn into conflicts not for China’s sake, but because of their interests."

Both Korany and Awad addressed in the discussion how COVID-19 is reshaping the world order, highlighting the geopolitical implications of the pandemic regionally and internationally.

In the past few months, the world has been witnessing economic, political, social and cultural changes, with growing discussions on the evolving world order. Reflecting on how COVID-19 will change the world, Kornay says, while globalization can't be stopped, "questions are arising about the downside of the high economic interdependence between states, reflected on the inability of some countries to obtain some products and materials, especially in the medical field."

Korany added. "There is a continuing conversation about the strong return of the nation-state. During the pandemic, states have used their powers to take crucial decisions like closing and opening borders, enforcing social isolation and quarantine, and using technology to control society and individuals. Globally, this state of emergency has required the need for a state with such power. I believe that the idea of a controlling nation state would even continue after this current state of emergency ends."

Awad believes that it is still too early to predict the shape of the new world order, "Some say that we will witness a decline in globalization, the strengthening of the nation-state and a return to the old concept of sovereignty. Others see that there are no alternatives to continuing international cooperation in the face of a global pandemic. However, there could be changes to the current version of globalization, including the improvement of global governance."

As for regional and international conflicts, Korany believes they will continue. "The Palestinian-Israeli conflict will continue, and problems will persist, whether in Yemen or Syria, and the cold war between China and America will continue. We have seen how the American President Donald Trump tried to use the dispute between the two countries in COVID-19 -- a dispute that started earlier after the U.S. imposed strong restrictions on imports from China. However, the dispute between China and America is an economic one." Kornay continued.

As for the refugee situation during and post COVID-19, Awad says: "Refugees are not welcome in European countries, but we must take into account that the pandemic does not distinguish between citizens and immigrants, so countries, international organizations and donors must discuss refugees' rights. We are fighting a pandemic that attacks all human beings, not only citizens. Therefore, there should be solidarity between people."

Awad indicated how a shortage of doctors and medical staff in developed countries allowed for opportunities to hire many refugees and migrants in the health sector -- opportunities that didn't exist earlier. “This explains the tremendous benefit that these countries are missing when they don't welcome refugees."

With the sharp decline in oil prices, stirred by the pandemic, Korany noted, the impact of the drop in oil prices is dependent on the social and economic conditions present in each country. “There has been a growing discussion on the end of the oil age after the decline in oil prices and the loss of oil revenues in the Gulf states," he said. "Since 70% or 80% of the exports of most of Gulf countries depends on oil, a decrease in the price or quantity affects them greatly. We have seen that reflected in Moody's downgrade of Saudi Arabia and its budget deficit reaching 10%.”

Korany added that 12% of the Egyptian national income depends on revenues from the Gulf and countries such as Jordan and Lebanon. With the reduction of salaries in some Gulf countries, he expects an increase in unemployment rates could follow with the return of many workers to their home countries. "So we should be able to foresee such changes and plan properly for solutions to arising problems as a result of the pandemic," Korany said.

Awad pointed out that the COVID-19 pandemic showed the defects in the economic and social systems, He stressed that what is required now is to confront the new circumstances and reprioritize in terms of giving public health the attention it deserves and focusing on solving the problems of housing and the informal employment sector. "This pandemic can lead to a change in prioritizing policies, especially given the inability of health systems in developed countries to deal with the crisis," he said. "Many now believe that COVID-19 has not produced new problems, but rather revealed existing ones."

For regular updates from the University during coronavirus visit www.aucegypt.edu/coronavirus