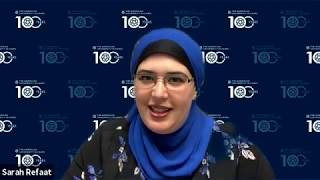 Board of Trustees Virtual Meeting

The first topic addressed the Board of Trustees meeting, which took place earlier this month and was held virtually for the first time in AUC"s history. President Ricciardone said that the meeting involved continuing long-term planning of the University in terms of the phase two master plan and next year's budget, reporting on the newly formed committees and going over how to best continue to fulfill the University's goals during this emergency situation. Approving next year's budget was postponed until the next meeting in June due to the uncertainty of the current situation. The board's meeting also saw the approval of eight tenures.

CFO Habib stated that his office is in charge of four mandates: to optimize academic and non-academic major costs and revenues, review and assess financial control, identify and revamp unnecessary expenditures, and ]review and assess manual procedures.

Habib said that FY21 is looking at a budget deficit due to the global pandemic, and the University has been reworking this year's budget (FY20 ends on June 30) to accommodate the current situation. One of the major effects of the pandemic is the drop in enrollment of international students, so the University is looking at how to compensate for that revenue.

Some long-term goals of Habib's office are to make AUC a cashless campus and to accelerate the extension of the University's extended education programs online to be offered beyond Egypt — a move that would help increase revenue.

Senior AVP Refaat emphasized that a hiring freeze does not mean a total freeze on hiring. She stated that the University is doing what it can to save jobs by utilizing internal resources. This means a focus on moving around positions and hiring from within the University instead of external recruitment.

Provost Abdel-Rahman said that the Center for Learning and Teaching has created a plan for the Summer 2020 session's online instruction. This plan sets the standards for assessments, assignments and class meetings.

The University is looking at the policies that are being set by the Egyptian government and what universities in the United States are doing to help make a decision, which should be coming out no later than mid-July.

President Ricciardone said that the initial reports concerning the employee at AUC Tahrir Square indicated that he was in stable condition, and all of the patient's close contacts were traced. The University is protecting his confidentiality. One student reported to have been diagnosed with COVID-19; however, this student has not been on campus for the past several weeks, meaning he or she did not contract the virus from campus and did not spread it to anyone on campus.