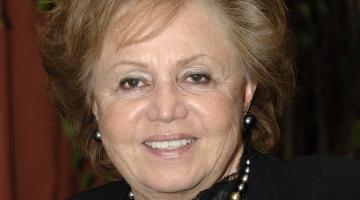 Born in Jerusalem, Juffali is the widow of the late Sheikh Ahmed Abdullah Juffali and has received her Bachelor of Arts in psychology and sociology in 1954 from Beirut College for Women (now Lebanese American University).

Juffali’s main concern is human welfare, which is reflected in her motto: “Where humanity and kindness unite.” She believes that every human being has the right to live a decent, productive and healthy life. Her main interests lie in health, education and social welfare –– areas where she has exhibited endless devotion and service in Saudi Arabia and several other countries in the region for the past 60 years.

One of Juffali’s main social contributions is the establishment of the Help Center in Jeddah, which she co-founded in 1985 and has been serving as its trustee since then. The Help Center is a special rehabilitation institution for children with intellectual disabilities. Juffali supports other programs and research endeavors in the health care field, contributing to mental health programs, neonatal clinics, cancer centers, as well as kidney dialysis and immunization programs. She also supports initiatives serving the medical needs of innocent victims caught in the crossfire of war.

A strong believer that “investing in today’s students means investing in the future of the Middle East,” Juffali has established her own foundation, the Suad Al-Husseini Juffali Foundation, that provides higher education scholarship funds to Arab students and establishes chaired professorships at different universities around the world. Concerned with social welfare, Juffali was involved in establishing and organizing Women Welfare Society in 1956, Jeddah’s first women’s welfare society, in addition to Al-Faisalya Women Welfare Society, also in Jeddah.

A member of AUC’s Board of Trustees since 2001 and advisory trustee since 2006, Juffali has been a longtime supporter of AUC, believing that “a high-quality institution like AUC will provide the Arab world with future leaders in different fields.” Throughout the years, she has demonstrated an exceptional sense of civic responsibility and philanthropy by supporting AUC in vital ways, including the establishment of the Tarek Ahmed Juffali Professorship in Psychology and the Tarek Juffali Endowed Fellows Program in community and counseling psychology, both in memory of her late son. She also established the Suad Al-Husseini Juffali Scholarship and named the Serenity Room at the AUC Library and La Palmiera Lodge, the female student dormitory, as well as supported the establishment of The Sullivan Lounge, a faculty lounge in AUC New Cairo. In addition, she has contributed significantly to the Palestinian Scholarship Fund and the AUC Annual Fund, and supported student scholarships at AUC’s inaugural 2011 Benefit Dinner.

Honoring her achievements, AUC presented Juffali with an honorary Doctorate of Humane Letters in 2007 in recognition of her “outstanding services and contributions to the areas of social welfare, art, music and education that span several countries in the Middle East and the United States of America.” She also received AUC’s Distinguished Honorary Alumni Award in 2005 in recognition of her commitment to liberal arts education and her outstanding record of leadership and service.

In addition to establishing and supporting multiple centers and organizations that provide educational and health services, Juffali also serves on the boards of several institutions locally and globally. These include the Ahmed Juffali Foundation, Help Center, Dar Al Hanan School, Effat University, Arab Thought Foundation and VSA Arts KSA in Jeddah; Society for the Relief of Palestine Refugee Camps and Lebanese American University in Beirut; The American University in Cairo; The International Academy in Amman; VSA: The International Organization on Arts and Disability, Georgetown University’s Center for Contemporary Arab Studies and Institute for Palestine Studies in Washington, D.C.; Al-Makassed Islamic Charitable Society Hospital and Dar Al-Tifel Al-Arabi Organization in Jerusalem; as well as Bethlehem University and Birzeit University.