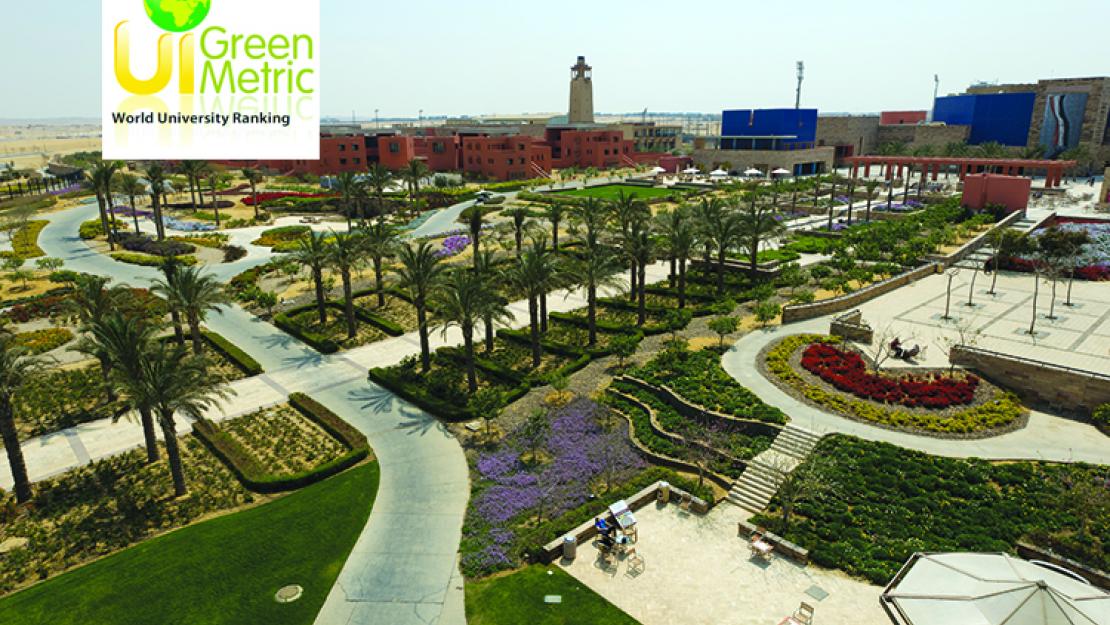 AUC has moved up in the Universitas Indonesia (UI) GreenMetric World University Ranking, placing 81 out of 407 institutions worldwide, up from 105 out of 360 last year.

Mahmoud emphasized that the UI GreenMetric ranking allows AUC to compare the success of its sustainability initiatives and to benchmark improvement from year to year. “It is very important to have these ranking systems and be rated amongst institutions all over the world," she said, adding that this year's ranking put more emphasis on institutions' awareness of their carbon footprint, something AUC has pioneered in the region, being the first higher education institution in the Middle East to measure its own impact on climatge change. "We would be leading all other universities to follow us in this way of sustainable thinking.”

An initiative of Universitas Indonesia, the GreenMetric ranking scores universities all over the world in six main indicators; setting and infrastructure, energy and climate, waste, water, transportation and education. AUC ranked particularly well in energy and climate, at 26th and water at 32nd.

The ranking is based on an institution's overall commitment to developing and maintaining an environmentally friendly infrastructure. The Office of Data Analytics and Institutional Research (DAIR) has especially pivotal to AUC’s green commitment by compiling information from all over the University regarding sustainability projects including the Office of Sustainability, the Research Institute for a Sustainable Environment (RISE), as well as Transportation and Food Services.

Mahmoud pointed out that the University has already significantly reduced the use of the heating, ventilation and air conditioning (HVAC) system in the past three years, but is looking at even more ways to limit consumption. “We are working with the Office of the Registrar and schools who have courses in the winter and summer semesters to consolidate classes in certain areas of buildings so we can only have the HVAC system in that section and reduce the overall energy use on campus,” explained Mahmoud.

The Office of Sustainability is also coordinating with the night security patrol to keep track of offices that leave lights on overnight. “They send the data to our office and if we find that this happens frequently in a particular office, we remind them to turn off lights at night and be more aware of their energy use,” explained Mahmoud.

The sustainability office also has several projects to address waste disposal on campus, with recycling sorting stations placed in the on-campus student housing and faculty housing. However, there is still a lot of paper waste on campus.  “We believe it will be most effective and convenient if we collect directly from offices, so we are testing out a pilot project in the Administration Building and will then expand to all departments,” she said.

To deal with waste, the University has a recycling facility where materials are sorted by staff workers and compressed by a new compacting machine into a fraction of the original size. “It allows us to sell the materials for a higher price to people who reuse them in other projects. Then the revenue goes back to sustainability projects,” stated Mahmoud.

Reassessing What We Have

Mahmoud noted that the first three years for the Office of Sustainability were focused on reducing excess energy consumption and minimizing AUC’s carbon footprint. Now, the focus is on re-evaluating existing programs to make them better, gathering feedback and looking for ways to improve so AUC continues to move up in rankings like UI’s GreenMetric.

In a recent initiative, the Office of Sustainability restructured13 sorting stations for recyclables around campus. ”We did a survey to see how they were working and found most people weren’t actually using all six,” remarked Mahmoud. “We are trying to enhance these sorting stations to be more accommodating for people who are using them, and we’ll check back to see the outcome”

In addition, Mahmoud has been working with landscaping staff members to determine the best locations for the irrigation system and the types of plants that require little water. For the past year, the campus has been irrigated with only treated water, without using any domestic water, but the Office of Sustainability and its counterparts are always looking for ways they can do a little more to use a little less — the sustainability mindset that AUC promotes.

Tina Jaskolski, head of research at RISE, noted the importance of community education at the institutional level, including the Sustainable Campus Committee initiated by RISE, which has been organizing Earth Week and other campus awareness raising events since 2010.

Part of promoting a sustainability mindset also includes encouraging sustainable lifestyles that incorporate environmentally friendly principles in everyday life. Jaskolski noted the success of the Adopt-a-Plot program, which provides space for the AUC community to grow their own fruits and vegetables.

In another initiative, the Office of Sustainability is exploring ways to share the benefits of carpooling by updating the website and making it easier to connect drivers with riders. “Even though we do want to reduce our energy consumption and emissions, not  all people are motivated by that,” explained presidential intern Wendy Wei.  “They are motivated by the social aspects and how they benefit their everyday life. By carpooling, instead of sitting in traffic for two hours, you can have a jam session with someone.”

“On the operational side, we are still doing the same things. Now we are in the phase of creating more awareness in the community,” added Mahmoud, adding that improving existing initiatives is as important as the programs themselves. The UI GreenMetric ranking is an encouraging indicator that the University is on track, she said. “It gives the people here a feeling that we are really achieving something and students in the sustainability master's program know they are in an institution that cares about the environment," Mahmoud affirmed. "We are starting with our own campus, but we do it because we really care about promoting a better Cairo, Egypt and world.”