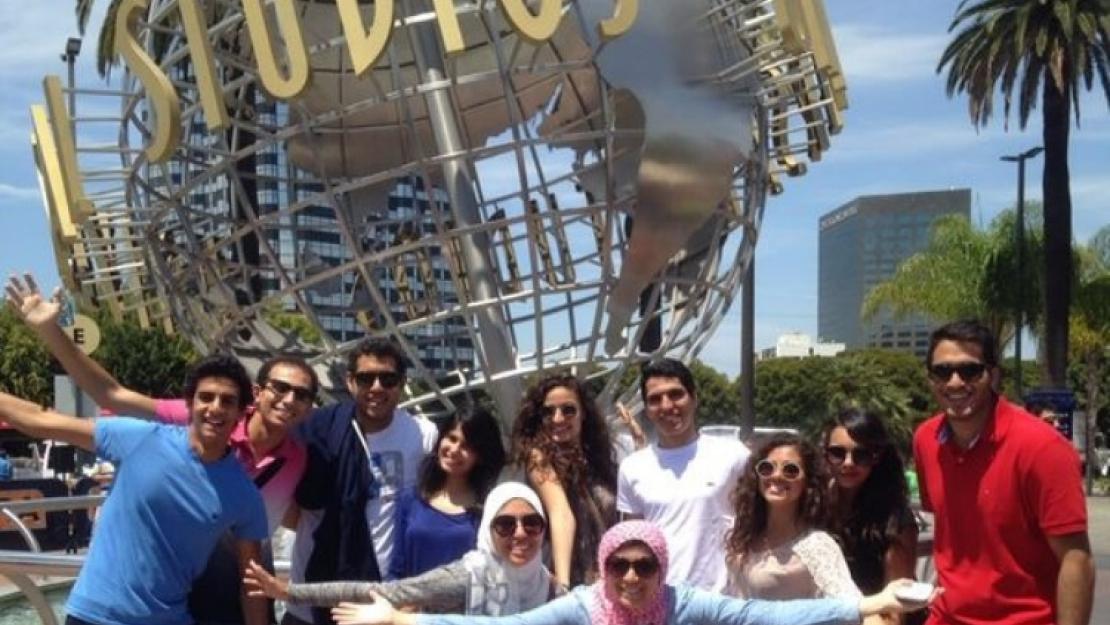 For Radwa Soliman, secretary-general of the Cairo International Model United Nations and a double major in computer engineering and electronics and communications engineering, studying abroad this summer at the University of California, Berkeley offered her “the best of both worlds.”

“You get to experience being responsible for yourself and being able to run a house on your own,” said Soliman, who took courses in engineering dynamics, music theory and Shakespeare at Berkeley while working as part of a research team on computer vision. “You also understand how studying and living in the United States works and the amount of workload expected from you to actually sustain a good academic status. In addition, you get to enjoy a very long and nice vacation that is definitely amazing.”

Soliman is one of almost 100 AUC students who studied abroad this summer. The majority of students took courses at the University of California, Berkeley, while others attended summer programs at the University of California, Irvine, the American College of Greece in Athens, and The George Washington University in Washington. For the students, the experience cultivated independence and confidence as they learned about different cultures and ways of life, and developed a new sense of academic and personal growth.

“I discovered a lot about myself when it comes to what my interests are,” said Salma Sharafeldin, who studied psychology and communications at the University of California, Los Angeles this summer. "Being outside my comfort zone made me realize what I want to spend my time doing and the kind of people I enjoy being with the most."

Like Soliman, the summer-abroad experience for Sharafeldin was a gateway into adulthood. “The best part is being independent,” she said. “If I don't clean my room, no one else will do it, and if I don't manage my day, I'll definitely fall behind. I realized that with proper planning, I can do lots of stuff in one day, which makes me happier than spending most of my time in one place."

This mobility gave the students the freedom to enjoy another city and immerse themselves in a new culture. “We did a lot of sightseeing, visited Universal Studios and relaxed at beaches,” enthused Soliman. “I am going to miss the freedom that accompanied my stay in Berkeley. I’m going to miss the company of my friends, the opportunity to keep meeting new people and the chance to try things I wouldn't normally do.”

Research was also an integral part of the students' academic experience. "One remarkable thing is that almost everyone on campus [in Berkeley] was working on research," said Soliman, who -- as a member of the computer vision research team there -- worked on the compatibility of a new device with older products at Berkeley. "You are always asked to take part in experiments. Some courses, like psychology for example, even ask you to take part in experimental research as part of your grade."

Zyad AbdelAziz, who also studied at Berkeley this summer, said that his academic experience, in particular, was life changing and made him rethink his goals. “I took courses in advertising strategy and consumer behavior, and my professor for both of those classes has made me reconsider every plan I had for my future, even my major.”

He added, “Our professor told us two things, ‘To be number one, you have to think like number one’ and ‘You can be outrageous, but the message should be simple.’ I thought to myself, ‘These are not merely quotes. If I could make these a goal in my business life, I will certainly become someone better than I would have ever expected.'”

The Office of International Students and Study Abroad provides opportunities for AUC undergraduates to study abroad for a semester or year, in addition to the shorter summer programs. Universities that have summer study-abroad arrangements with AUC include Stony Brook University in the United States, University of Cambridge in the United Kingdom, John Cabot University in Italy and Bogaziçi University in Turkey, among others.

“It’s an amazing experience that no student should miss out on,” affirmed Sharafeldin.

Photo caption: Salma Sharafeldin (third from right) with a group of AUC students this summer at Universal Studios in Hollywood