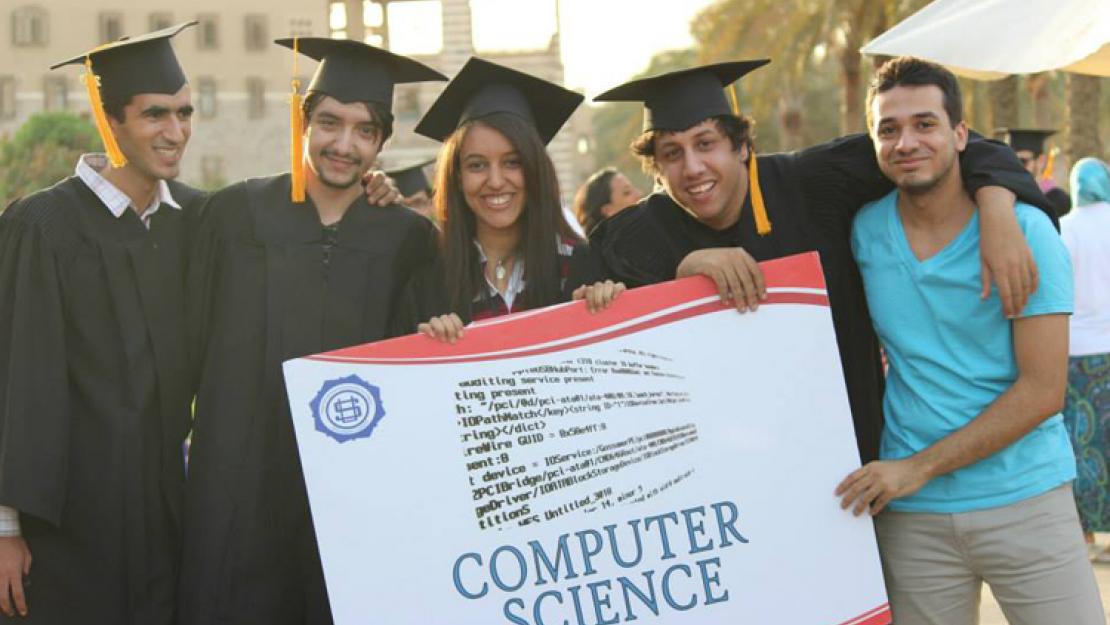 Helping software developers create new virtual reality applications –– from games, classroom learning and training simulations to therapy for sufferers of phobias and post-traumatic stress disorder –– a group of computer science students at AUC created an innovative open-source platform to meet developers’ needs. The project, Dream On, won first place in the Kinect track at the nationwide IbTIECar competition and was recognized by Microsoft, which developed the Kinect system.

AUC students Diaa Abdallah, Ahmed Aboulkheir, Omar El Sheikha, Nourhan Sakr and Ahmed Bassiouny created Dream On as their senior project, spending the 2012 - 2013 academic year working on the design and development of the system.“We wanted to do something different that would serve others in the long term,” Abdallah explained. “The project allows developers to easily build virtual reality applications, which could include games, medical simulations or simulations in dangerous places. After completing the Dream On system, we were able to produce three simulation environments in just two days.”

Virtual reality applications have multiple components, including the goggles one wears in order to see and be immersed in the virtual world, and sensors that enable users to interact with this world. In the past, the sensors and goggles were not integrated, meaning that a developer would have to write software for both the sensors and the goggles, and then additional software in order to make them work together. The Dream On platform integrates the Microsoft Kinect motion sensor with Vuzix goggles, which monitors head movement and displays 3D scenes to users.

“In the past, 3D application developers had to build everything from scratch,” said Mohamed Moustafa, associate professor of computer science and engineering, who served as the faculty adviser for the Dream On project. “With the Dream On tool, hundreds of lines of code could be condensed to only one, so developers can focus on creating better applications.”

Virtual reality applications can be used for a variety of tasks, not just for gaming. Virtual reality is used in flight simulations for new pilots and astronauts, and could also be used in training doctors to perform various procedures. Psychologists have also experimented with using virtual reality simulations to help people confront their fears in a controlled environment in an effort to cure phobias such as fear of flying or heights. 3D simulations have also been used to treat soldiers suffering from post-traumatic stress disorder.

The Dream On platform is open-source, meaning that anyone can download, share or alter it, and developers can customize it to meet their needs. “Working on this project, I gained a lot of experience in developing a system that is flexible and allows users to add features to it easily,” said Abdallah, who now works at Microsoft Advanced Technology Lab Cairo. “I also learned a lot about teamwork and how to produce a product in a timely manner.”

Echoing the same sentiment, Sakr, who is now pursuing a master’s degree at the University of Waterloo in Canada, noted, “This experience was fun and very rewarding, regardless of whether I will work in the virtual reality field or not. On an academic level, it taught me how to research and teach myself beyond the curriculum of my courses. On a practical level, I have gained insight into a full software engineering cycle, starting from the inception of a project idea until its actual release.”

The Dream On students were the only AUC representatives at the IbTIECar competition, an innovation recognition program for students launched by the Egyptian government’s Technology Innovation and Entrepreneurship Center. The competition, as stated on the TIEC website, aims at “driving technology and entrepreneurship in information and communications technology for the benefit of the national economy.” “They discover new talents and innovative ideas each year through different graduation projects,” said Sakr.

The Dream On project was also recognized by AUC’s computer science department, which awarded the students Best Graduation Project. “I am very proud of the team,” affirmed Moustafa. “They are hard workers and very independent; they did self-study on their own. I applaud their efforts, and they deserve recognition for their work.”