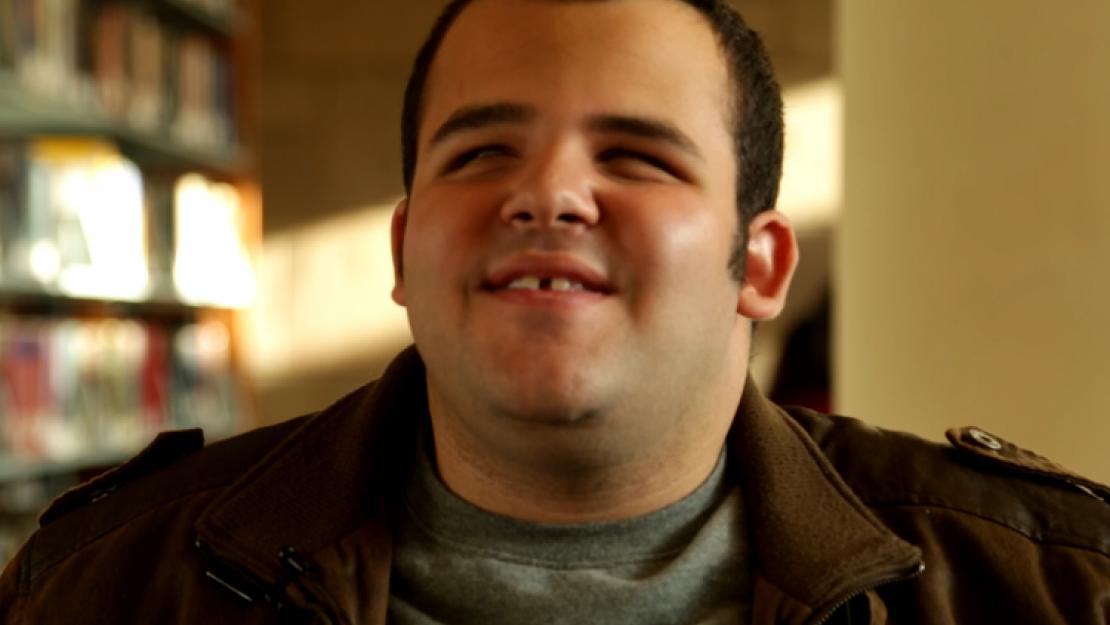 “I hope one of these days to do something to make the world a better place,” mused Mohamed ElShafie, a philosophy sophomore who is attending AUC with the support of the HSBC Bank Egypt Public School Scholarship, which gives preference to students with special needs. “It seems that, right now, this country and all of humanity have lost their way and need direction. In the modern era, we need people with this sense of direction. Egypt is going through a late age of enlightenment. There are not many certainties we take to be true. I find it interesting to have this space to think.”

ElShafie is a musician, writer and philosopher, whose insight into life and the world around him reveal a wisdom beyond his 20 years of age. After graduating from Taha Hussein School for the Blind in 2012, ElShafie embarked upon AUC, as he explained, with “no notion of what I wanted to do, when a muse charmed me to philosophy.”

In addition to his studies, ElShafie is currently working on his first novel, a play and an academic treatise, along with writing essays and poems in iambic verse. “The diversity of AUC, meeting different people, gives me a lot to write about,” he noted. “Being at the University is a unique experience. AUC offers much that other institutions do not. It approaches learning for the sake of learning and encourages intellectual development. The deep intellectual level of classes [at AUC] is one of the most refreshing and stunning things that I ever have encountered.”

ElShafie is not only a prolific writer, but also an active reader who has found inspiration in Dickens, Balzac, Dostoyevsky and Checkov –– whoever the “writer of the moment” is, he joked –– as well as Greek philosophers, American storytellers and even Alexis de Tocqueville, who wrote the treatise Democracy in America. He approaches reading methodically, taking on numerous works at once. “Generally, at one time, I read a play, a work of fiction, a work of modern nonfiction, a work of modern philosophy and a work of ancient philosophy,” he explained. “It seems like it would be challenging or distracting to read these different works at once, but actually they all complement each other. I find Nietzche in Flaubert, for example.” An accomplished pianist, ElShafie has achieved an associate diploma from Trinity College London’s Trinity Guildhall, which sends a representative to Egypt annually to conduct an evaluation of the students based on pieces they spend a year preparing. He is currently working toward the Licentiate Trinity College London Diploma. “Since an early age, I’ve been interested in music, especially classical music,” he said. “I gained interesting insights because in the morning at school, I was with people from every background, then in the evenings, I would sit with British ladies drinking tea and listening to Wagner. At one point, I wanted to be a pianist, before I was captivated by philosophy. Piano is still a friend I love very much. Four years ago, I wouldn’t have thought of becoming a philosopher, but life is full of surprises.” In addition to his artistic pursuits, in 2005, at the age of 11, ElShafie achieved the information and communications technology certified trainer designation from Microsoft. He was the youngest person in the Middle East region to accomplish this distinction. He has also participated in numerous technology conferences, and has translated and printed for blind people legislation about children’s rights in Egypt. ElShafie has received numerous forms of recognition for his accomplishments, including being invited to Morocco in 2009 at the invitation of King Mohammed VI to celebrate the 10th anniversary of his coronation. ElShafie’s passion for art, knowledge and the written word is grounded in an acute understanding of the human condition, and he is motivated to make his mark on the world because of his awareness of the difficulty of doing so. “I downloaded a list of the 5,000 most important books in history, and I began thinking that it would take 100 years to get through them,” he recalled. “In 100 years time, if my name was mentioned, it would probably be met with a bewildered smile. When one begins to fathom the shortness of life, it makes you want to build something beyond yourself. I want to be remembered for making humanity even a little better.”