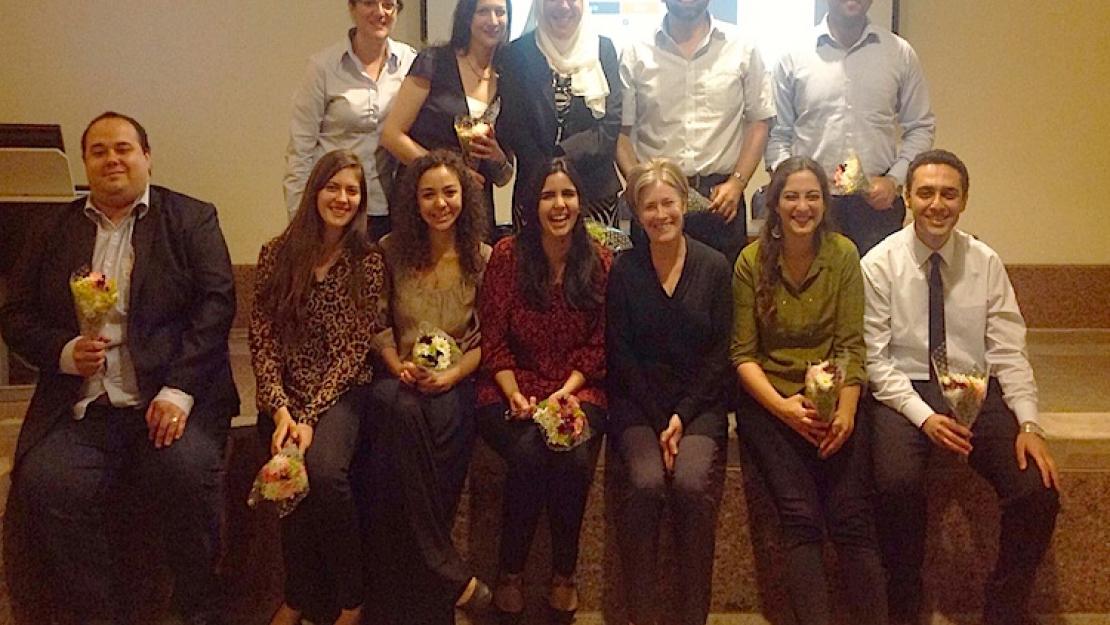 Two AUC students won first place in a grant competition for their proposal to help solve solid waste accumulation in the informal settlement of Ezbet Khairalla.

“Trash into Cash is an initiative to ultimately create a sustainable solution to solve the problem of solid waste accumulation in the informal settlement of Ezbet Khairalla,” explained Ibrahim. “The proposed role of the initiative is to administer a workshop that will bring together all possible strengths and ideas to develop a feasible outline and plan for a recycling project that can be implemented in Ezbet Khairalla. This workshop will bring together community members, local NGOs, Kheir w Baraka and recycling specialists from the Zabaleen area, who are experts in this field. The resulting plan was created into a proposal that Kheir w Baraka submitted for funding.”

This competition was the culmination of an assignment for the Prevention and Intervention in Communities graduate course, taught by Carie Forden. “Early in the semester, the students formed teams and chose a nongovernmental organization to work with,” Forden explained. “They then met with their NGOs to find out what their program needs were, and the teams designed a prevention program for the nongovernmental organization and wrote a grant proposal for $500 to support the program.”

The program proposals were presented to an audience of family members, NGO staff members and friends. Each team had 10 minutes to present their proposals to a panel of judges from several institutions, including Nahdet El Mahrousa nongovernmental organization, Al Fanar Foundation, Barclay’s Bank and AUC. The judges decided which proposal was the best and should be funded.

“All of the proposals were excellent,” Forden said. “The students did a wonderful job of presenting the case for their projects, and the judges had a difficult time choosing the best one. I was very proud of them. It was exciting to see them do so well in applying the material we had learned during the semester to developing real-life prevention programs.”

Ibrahim noted how the entire process for creating these prevention programs was hands-on and incorporated the views of community members. “The idea of this initiative first came to us when we visited Kheir w Baraka’s office for the first time, and they mentioned the important need for a sustainable solution to the solid waste problem,” he explained. “A further visit to the NGO, where a focus group was conducted with several women from the area, confirmed that garbage was high on the list of problems that the community needed a solution to. Put simply, it was not our idea but that of the community, as they knew what they needed more than us.”

This hands-on experience is part and parcel of AUC’s community psychology graduate program. “Community psychology is a professional program, and every class incorporates experiential learning,” Forden noted. “We want our students to be prepared to succeed in their internship experiences and to be able to work effectively in professional settings. Grant writing is a very important skill for working in the nonprofit world. The grant competition is also a way to connect the University with NGOs and foundations, and to assist NGOs and foundations in connecting to each other. It was very successful, and I am hopeful that it will become an annual tradition.”