The Story Behind AUC's Historic Palace 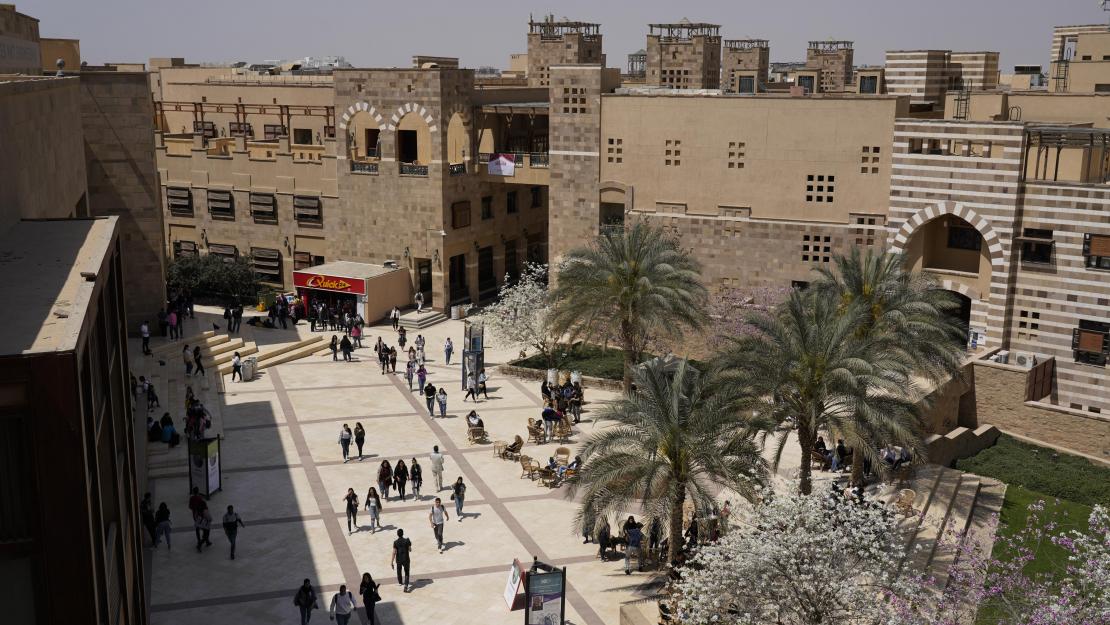 The history of the Palace Building at AUC's Tahrir Square campus dates back to the 1870s. Photo courtesy of the AUC University Archives

Perhaps best known for its impressive architectural style, the palace also boasts a rich history of its own. A cornerstone in AUC’s history, it connects the University community to Egypt’s educational and cultural past.

The palace's connection to education in Egypt stretches long before the University. In fact, the building was constructed in the 1870s by Khedive Ismail to house his confidant and Minister of Education Ahmed Khiary Pasha, for whom the building is named. Sold to Greek businessman Naestor Gianaclis after Khiary’s death, the palace was briefly used as a cigarette factory, where Gianaclis made and packaged his famous Helmar tobacco products.

Though Watson originally wanted to build the University by the Giza pyramids, he abandoned the idea in 1917 in favor of the historical complex nestled near Cairo’s downtown. Not only was the palace more centrally located, but also the land around it was not yet developed, providing ample room for the fledgling University to expand. It would take two years for Watson to gather the funds he needed to purchase the building, and perhaps he never would have if land prices had not dropped in 1919 because of the the arrest of nationalist Saad Zaghloul and the subsequent revolution that same year.

With a new campus and 142 new students, the American College of Arts and Sciences opened on October 5, 1920. The opening coincided with the palace’s first major renovation that included a replacement of the pasha’s Turkish bath with showers that students could use after athletics training.

In a letter to President Watson, Robert McClenahan, one of AUC’s founders and Dean of the Faculty of Arts and Sciences from 1920 to 1937, boasted the success of the restoration. “I wish you might see the entrance of the building. The colors, and especially the subdued lights make it, I believe, the most beautiful place in Cairo.”

With the growth of the student population over the next decade, the building’s second major renovation included the addition of Oriental Hall and Ewart Memorial Hall in 1928 and 1932. This renovation marked the beginning of the palace’s second life as a cultural center in Cairo’s downtown.

Over the next 80 years, the palace hosted prominent figures in the local and international communities, including a host of humanitarians, academics, Nobel laureates, artists and politicians, among others. The building was no stranger to such events, as Theodore Roosevelt delivered a lecture in its assembly hall while it was still being used by Egyptian University.

Meanwhile, around the campus, multi-storied apartments and office buildings were erected as property by the Nile became more desirable. Traffic in the downtown area increased, as did the noise. These trends continue to today, as the palace now overlooks Cairo’s bustling Tahrir Square.

With Ewart Hall’s upcoming renovation, the palace looks to remain Cairo’s cultural epicenter in the 21st century. Now with today's technology to complement its historical neo-Mamluk architecture, the building will feature state-of-the-art the sound and lighting systems and media displays in Ewart Hall.

The palace has lived many lives thus far, from its beginnings as a pasha’s residence to its future as a cultural center. The oldest building at AUC, the palace has also remained a constant throughout the University’s history. Now, the palace continues to serve the University community as a reminder of our commitment to Egypt’s education and culture in the past, present and future.