Stephen Grand: People, Not Leaders, are the True Test of Democracy 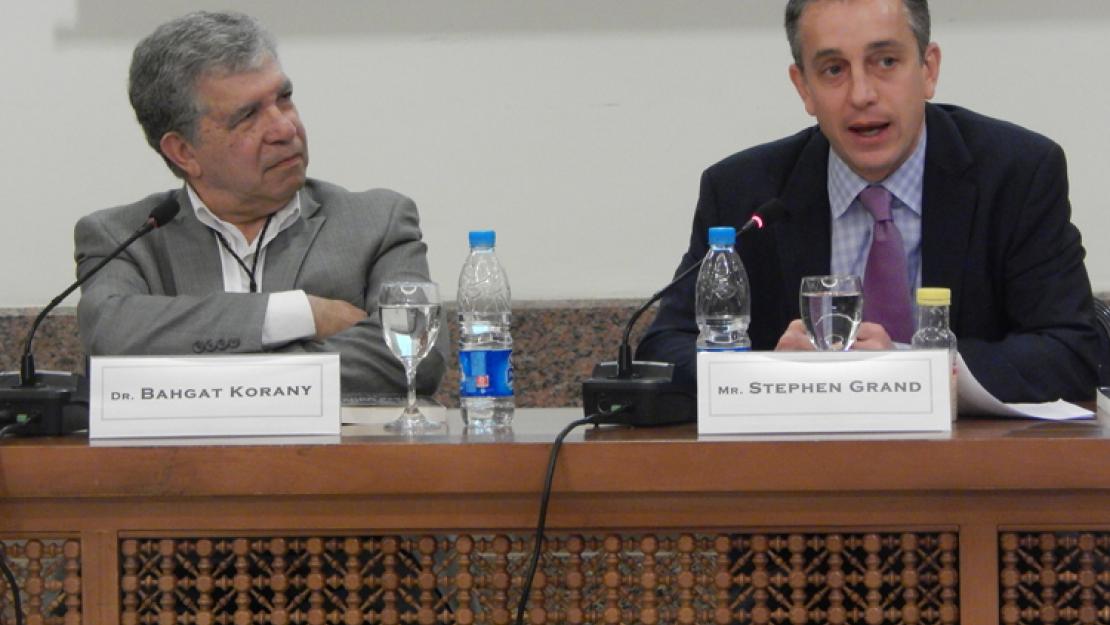 Democracy does not rely on the leaders in power, but the mass of people who hold those leaders accountable, argued Stephen R. Grand, nonresident senior fellow at Brookings Institution’s Saban Center for Middle East Policy, in a lecture organized by the AUC Forum titled “Understanding Tahrir and its Prospects: What Experiences Elsewhere Teach Us About Arab Democratization.”
“The true test of the strength of the democracy, is not the quality of the person who happens to be the leader in any particular day, but what happens in those moments when a leader steps over the line and runs roughshod over the constitution, or overstays his or her term in office, or clearly misappropriates public funds for personal use,” explained Grand. “Do citizens let him or her get away with it? Or do they stand up and make him or her pay the price? It’s only when political leaders understand that there’s a high price to pay if they violate the established political rules of the game, that you begin to see democratic political institutions actually stick.”
Grand’s perspective is supported by findings from his upcoming book, Understanding Tahrir Square: What Transitions Elsewhere Can Teach Us About the Prospects for Arab Democracy, where he examines almost 95 countries that attempted to transition to democracy from the mid-1970s to the end of the 20th century, a period known as the “third wave of democratization.” Grand noted that the transitions in these successful countries did not happen quickly or easily, but were long political struggles between the state and society over where power should reside. “It was often quite common for there to be dramatic twists and turns, sudden advances and heartbreaking reversals as a part of the transition process; this is normal,” Grand explained. “Often from the setbacks, important political learning takes place that helps move the process forward over time.” The countries that successfully formed a consolidated democracy, Grand noted, had an “effective political constituency that continually pushed for democracy to work” –– a feature that he sees forming in the countries of the Arab Spring. “An effective political constituency is a critical mass of citizens who, regardless of their personal political ideology or party affiliations, back democracy in its own right and advocate for it,” he said. “If political leaders are expected to abide by the political rules of the game, there needs to be political demand for the constitution to be adhered to and democratic institutions to be respected.” According to Grand, an effective political constituency is formed when three conditions are met: people no longer view themselves as “subjects” but as “citizens;” collective action occurs at the local level; and there is a “mobilization of disparate networks to push national leaders for democratic change.” If these challenges are met, Grand contends there is hope for democracy in Egypt. “Under the right conditions, democracy can take root in this region, but there is a need for pressure from below for these transitions to succeed,” he said, expressing an optimistic outlook for Egypt’s democratic future. “I’m an optimist when it comes to Egypt and the Arab Spring,” Grand affirmed. “If political violence can be avoided and if sectarian differences can be tamped down, it’s going to take a lot of time and a lot of effort, but it’s clear that citizens’ ideas about political authority and their relation to it are changing.” Photo caption: Bahgat Korany, director of the AUC Forum, and Stephen R. Grand at AUC