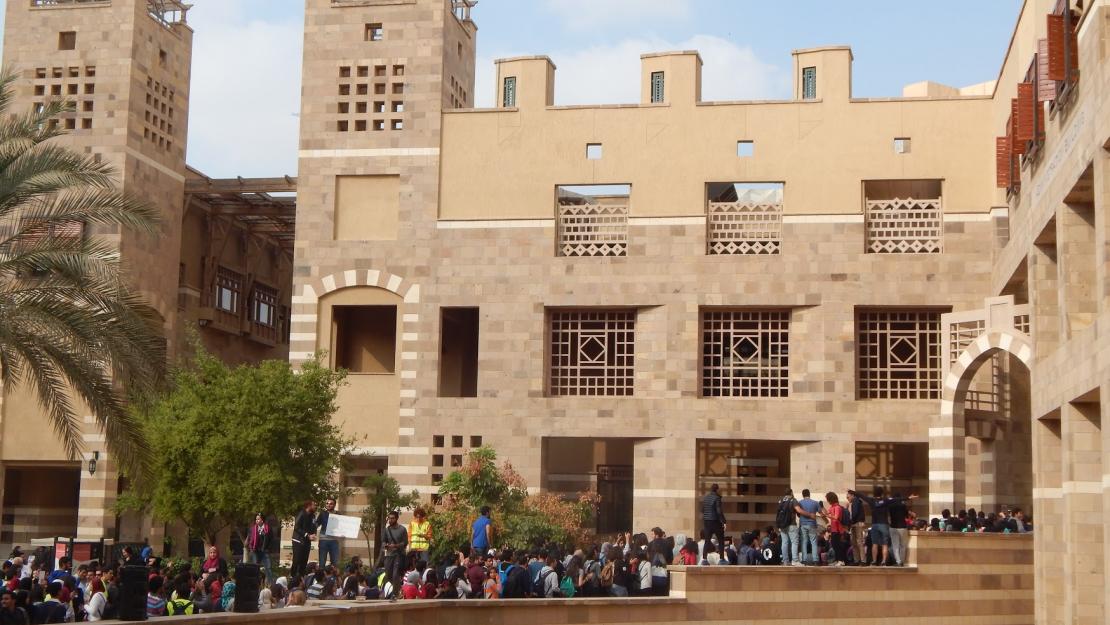 Over the past few weeks, the AUC community has engaged in discussions on issues related to the recent floatation of the Egyptian pound, as well as the economic condition of the University, student tuition, faculty and staff salaries, and more. The University has held two ​forums with students and offered a Provost’s Lecture featuring faculty members and outside experts to analyze the current economic situation and expectations for the future.​  In messages to the community, President Francis J. Ricciardone has continued to emphasize the University’s commitment to ensuring that no current student is forced to leave AUC because of an inability to pay tuition.

Some members of the parent and alumni constituencies have also become involved in this campus controversy, both on Facebook and by joining the student movement in person and meeting with the University administration. According to Aliaa Abdel Ghaffar ’90, president of the Parents Association, a tentative majority of about 120 parents at a ​meeting in Bassily Auditorium on November 27 demanded ​that AUC set the Egyptian pound portion of tuition due for the winter and spring semesters at​ the former official exchange rate of LE 8.88 to the dollar until currently enrolled students graduate, and that AUC “cap” future annual increases in Egyptian pound terms at​ approximately 7 percent. She reported that a minority of parents supported an alternative demand that the University share equally with all parents whatever tuition increases may be due in Egyptian pound terms vs. the steady U.S. dollar portion of the Winter/Spring 2017 tuition, and that the University express tuition due for the coming years 20 percent in dollars and 80 percent in Egyptian pounds, instead of the current 50/50 structure.

“After discussing everything, we voted on two solutions and came to a tentative conclusion,” said Abdel Ghaffar. “However, we are having another vote on Facebook to solicit the opinions of more parents, and we are still waiting for those results. We also spoke with President Ricciardone about holding a meeting with him and the Board of Trustees to officially present them with parents’ demands. Under the current economic situation that our country is facing, we expect AUC to not consider parents the main source of income, since 60 percent of AUC’s budget comes from tuition.”

From the student side, Amr El Alfy, president of the Student Union, noted that the main student demand is to restructure the tuition formula in order to provide equal opportunity that would enable all students to pay their fees. “This can be done by changing the tuition formula so that the dollar rate would be fixed or that we regain the old system of paying our tuition completely in Egyptian pounds,” El Alfy said. “If the tuition formula is not changed, it would not be sustainable.”

El Alfy added, “Right now, we are unable to find a midway solution because the administration has not considered all alternatives, which causes resentment on the part of students due to their sense of a lack of real communication between the administration and the student body as a whole. We, as students, believe we are not getting our full freedom in many ways and would like to see and feel that our concerns, demands and arguments are equally considered. We are also unable to properly access University policies, which is a huge problem.”

Various constituencies are holding their own meetings to voice their concerns, whether among themselves or with members of the faculty and administration. President Ricciardone met with some 40 parents on November 23 for several hours, after a disruptive student protest forced last-minute postponement of the scheduled Provost’s Lecture about the impact of the Egyptian currency devaluation on AUC. The University has issued warnings to several students found to be in violation of rules protecting freedom of speech, for their disruptive behavior including extremely noisy protests conducted both inside the Administration Building and​ outside of permitted assembly hours​. President Ricciardone also arranged for the Student Union leadership to teleconference directly with the new Board of Trustees Chair Atef Eltoukhy on November 22. ​

“We continue to meet with students, parents, faculty, staff and other stakeholders to help ensure a common understanding of this challenging situation,” said Brian MacDougall, executive vice president for administration and finance. “We all recognize the increased cost pressure caused by the devaluation of the Egyptian pound, know that difficult choices are ahead of us and hope to make further announcements soon. The key point to remember is the University’s commitment to reallocate budget resources on an emergency basis to ensure that no currently enrolled student will face withdrawal from the ​University due to his or her family’s inability to pay the additional Egyptian pounds due for the winter or spring terms because of the sharp devaluation in the Egyptian pound vs. the dollar. A second important point: All of us in Egypt are facing this emergency together. Both the University and our families have faced sharp losses in the valuation of our Egyptian pound-based income and assets. But Egypt is strong, AUC is strong and, together with our families, we will weather this emergency.”

Reflecting on the relationship between students and the administration, George Marquis, dean of students, noted that over the past two weeks, the Office of the Dean of Students has been busy on several fronts, listening carefully to students’ concerns about the effect of the floatation of the national currency on AUC’s financial policy going forward.

“We have maintained open channels of communication with and among students, parents and the administration, and have endeavored to relay relevant messages to students from the president and provost,” said Marquis. “At the same time, we are concerned that students understand not only their rights, but also their responsibilities to AUC and fellow members of the community. AUC upholds freedom of expression on campus for each member of our community. This freedom allows students to demonstrate for a cause, but students must understand that AUC, like private accredited universities located in the United States, protects the freedoms and rights of all by stipulating the time, place and manner for permissible demonstrations on campus. Students, like other members of the community, must give advance notice if they wish to demonstrate, and they must hold these demonstrations in locations, in manners and at times that do not disrupt classes or business operations. These rules expressly protect the students’ rights to demonstrate on campus, while also protecting the rights of other students, faculty and staff to conduct their own expression. That expression certainly includes the normal business of study, research, teaching and administration during established class hours. The objective is mutual respect and freedom in all our dealings with each other, and not only our communications.”