Egypt’s Economic Challenges: Is the Worst Over Yet? 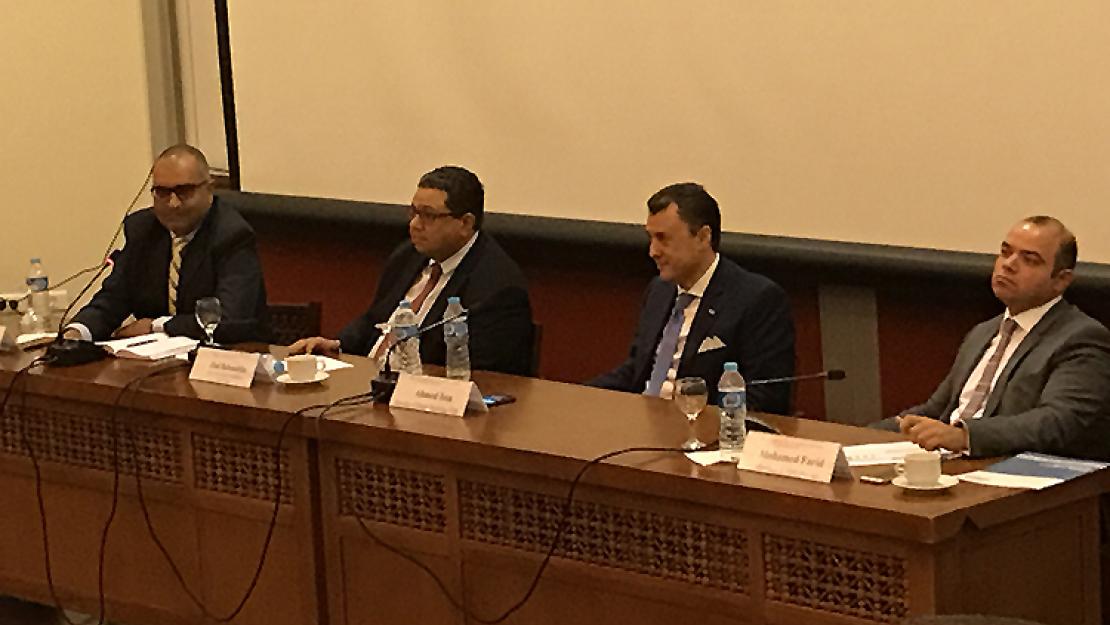 The floatation of the Egyptian pound –– an “impressive and courageous” move made by the Central Bank of Egypt on November 3 –– was inevitable, and any other alternative would have been extremely detrimental to the Egyptian economy, said Mohamed Farid, chairman and CEO of Dcode Economic & Financial Consulting.

“The worst is not over yet,” said Farid, who spoke as a panelist in the Provost’s Lecture, “Egypt’s Economic Challenges: Implications and Recovery.” “In any transformation from a managed flow system to a free flow system, markets witness plenty of disturbances. There will be volatility in the foreign exchange market … and turbulent economic growth. … Consumption will be impacted. Real income, if associated or linked only to the Egyptian pound, will be on the decline. We will face a very high inflation rate on every single front: fast-moving consumer goods, education, services.”

However, the “ultimate hope,” Farid noted, is that real and inclusive economic growth will come about through proper management; holistic economic and sectoral reforms; economic activities expanding outside the three main governorates of Cairo, Giza and Alexandria; a greater reliance on technology; shifting from a cash-based to a cashless society; and increasing financial inclusion. “To achieve sustainable reform, we need a real transformation of the economy,” said Farid. “We will [then] see productivity gains and an improvement on the economic front.”

Sharing Farid’s viewpoint, Issa noted how history repeats itself. He recounted three similar economic cycles in Egypt: in the 1980s, 1993 and 2003 – 2004. “In every cycle, there was a short period of volatility, followed by five to seven years of strong economic growth and prosperity. We expect the same cycle to repeat itself over the next five years.”

The government’s response today is similar to previous cycles, Issa noted: devaluation and floatation, followed by high interest rates to encourage Egyptians to convert their dollar savings to Egyptian pounds.

“Egyptians have about $50 billion of savings [denominated in U.S. dollars] in Egypt’s 38 banks, and almost half of those are in household savings. I’ll leave it to your imagination as to how many dollars are under the mattress,” declared Issa. “The high interest rates are to attract Egyptians to convert these $50 billion to Egyptian pounds, and there are signs that this policy is working. During the past two weeks, 70 percent of the sold dollars in Egyptian banks have come from the household sector, and Egyptian banks have seen 20 to 30 times more flow of dollars sold on [bank] counters to dealing rooms compared to previous few months.”

However, such high funding costs make it difficult for investors, Issa noted, which creates a big risk and negatively impacts job creation. “So we hope this [high interest rate] policy would end soon, and it should, judging by the history of the three past cycles,” he said.

Issa also noted that in order for Egypt to “move from poverty to prosperity” and create fast growth that would lead to sustainable jobs, the country’s manufacturing base should constitute about 50 percent of its GDP, whereas in reality, it has not surpassed 18 percent. “This is something Egypt needs to work on, and the only way to do that is by moving from a strong EGP policy to less emphasis on that because a country with a high local inflation rate compared to [other nations] can’t sustain the competitiveness of its manufacturing base,” he said. “During the past three months, our deficit in the balance of goods and services was $3 billion; this is not sustainable. We simply can’t live on such high deficits; there was no alternative to this [floatation] policy. …The worst thing that can happen in the next few months is hesitation. The best solution for Egypt is to stay on course.”

Bahaa-Eldin echoed similar sentiments. “Consistency of policy is important,” he said. “One of the factors that will have an immediate impact now is the capacity of the country to reallocate its resources right through the right education that will lead to the right economic growth.”

Describing the immediate repercussions of the Egyptian pound floatation, Farid speculated, “Is this a price that could have been avoided? That’s the $1 million question,” he noted, citing pent-up demand and macroeconomic imbalances, such as fiscal deficit, monetary policy and foreign exchange, as factors that are hindering investment and have led to where we are now. “A year and a half ago, we might have had alternatives on how to manage our monetary policy within the Central Bank of Egypt. However, the situation that we reached just before November 3 was very difficult to handle. The Central Bank of Egypt could not defend a certain value of the currency, and the private sector –– especially those importing spare parts or intermediary goods –– couldn’t operate. A free float system was the only option.”

Bahaa-Eldin agreed, saying that there weren’t other policy options on November 3, but there were policy options in previous years to deal with the root causes that have led to this situation, which “we all knew was coming, but somehow it took us by surprise nonetheless,” he noted.

“On November 3,” Bahaa-Eldin reflected, “[we] woke up to the realization that, unless [we’re] exporting and earning dollars, we all suddenly got poorer on [that day] by some percentage –– some more than others. But on the whole, this has hit everyone, whether you’re importing, consuming, building a factory or have installments to pay. … Nobody has been spared the pain [of this experience], but we must ensure that the distribution of pain is as fair as possible, that we make use of the benefits that come with this pain, and that we fix the causes of this pain as we move forward.”

Bahaa-Eldin attributes the root causes of this painful situation to a “weak institutional setup,” including a 2015 Investment Law that “offers a lot of tax incentives and promises things that cannot be achieved.” Tax incentives, Bahaa-Eldin noted, attract the wrong type of investments, create opportunities for corruption and don’t bring in important tax proceeds to the country. “It’s what we call in economics a race to the bottom, not race to the top,” he explained.

Agreeing, Issa noted, “In 2005, when Egypt abolished tax incentives, we didn’t lose a single multinational company. … Egypt is one of the most profitable business worldwide for multinationals, so they are willing to pay taxes and will continue to invest.”

Farid noted that, apart from tax incentives and tax breaks –– which are already existent –– helping investors can be more effective through clear policies pertinent to issues such as importation, licensing and registration, as well as the provision of highly skilled and trained labor. He added that in terms of the current volatility in the foreign exchange market, “we’re underestimating the agility of the private sector” in coping with this situation.

Other root causes Bahaa-Eldin noted include excessive public spending on mega projects, lack of progress on the debate about social justice and social protection, restriction of information and a weak capacity to deal with shocks, such as the situation with tourism and Value-Added Taxes. “The sense of taxation still being an option in Egypt is not heard of anywhere else,” he said. “Taxation is social justice.”

In order to come out of this situation with the right lessons, Bahaa-Eldin declared, Egypt needs to pinpoint and revisit the policies that have led to the devaluation of its currency in this dramatic way so that the country doesn’t face this situation again, with a bigger debt and with high liabilities toward local and international markets. “We need to move away from the debate on whether or not this should have happened; the devaluation had happened anyway in reality,” Bahaa-Eldin affirmed. “It’s like living in a house that keeps collapsing every day, but you don’t know that its value has gone down until you get an expert who tells you that its value is 50 percent of what you thought it was worth. … It’s important to appreciate the difference between a policy decision that creates a new reality and a policy decision that uncovers an unfortunate reality that was already there, but not accounted for in the right way.”