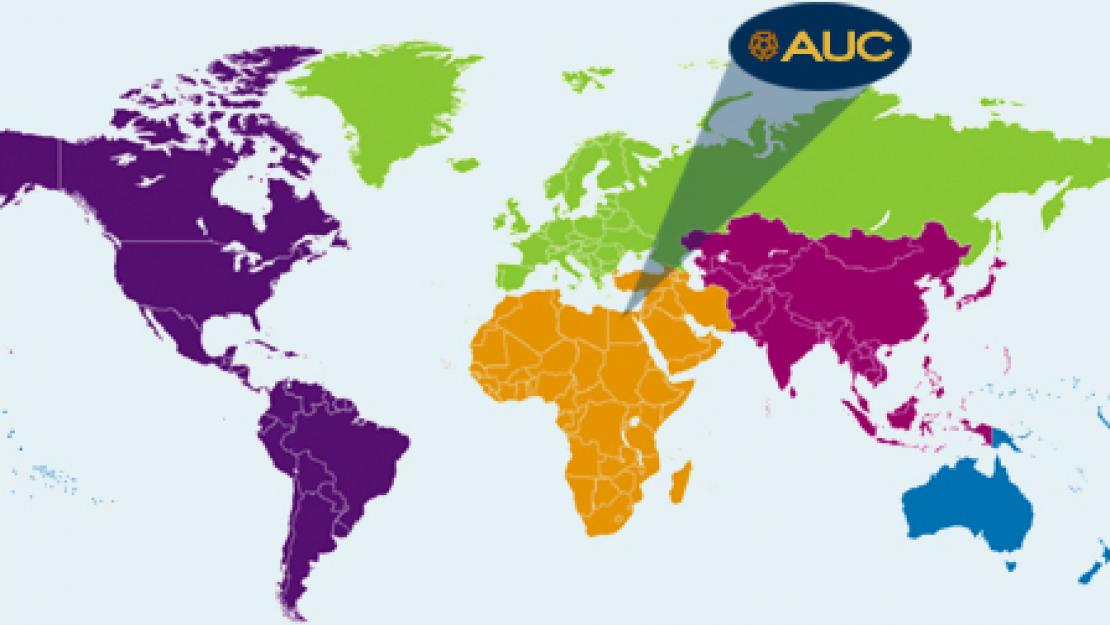 Seven AUC graduate programs were recently ranked among the best five in Africa and among the top 200 worldwide in the 2013 - 2014 Eduniversal rankings.Three graduate programs from the School of Business were ranked the first in Africa, whereas the Master of Arts in journalism and mass communication, offered by the School of Global Affairs and Public Policy (GAPP), came in second. Rated third in the continent were GAPP's Master of Public Administration and Master of Laws in international and comparative law, as well as the Master of Electronics Engineering with a concentration in management of technology, offered by the School of Sciences and Engineering.

“The Department of Public Policy and Administration (PPAD) is thrilled by this ranking,” said Hamid Ali, PPAD chair. “This is a transformative program in Egypt and the region. There are many factors that contributed to this recognition, including the caliber of the faculty, the quality of research and faculty-student interactions. This program has top-notch professors from the best educational institutions in the world, which helps to attract excellent students who are motivated to champion policy and administrative reform in Egypt and the region. The program has transformed itself to be a leading program in public policy discourse because more rigorous analytic tools have been embedded in our curriculum. We are building upon the tradition of AUC to be a leader in research, and so far we are developing research clusters in social and economic policies, public management and governance, conflict resolution and peace economics.”

The rankings were based on a survey of students and schools in 600 academic institutions all over the world, in addition to human resource managers, and master’s programs that are either nationally or internationally associated with 30 different specializations. The ranking of the top master’s programs was determined according to the reputation of the program, career prospects and salary level of the first cohort after graduation, as well as the level of satisfaction among students.

"This recognition, for the second year in a row, is a testimony to the hard work and dedication of the faculty and staff in the law department, and to our relentless commitment to provide students with the best quality of graduate-legal education possible within our comparatively modest means," said Hani Sayed, chair of the Department of Law. "It is also a recognition for AUC as a whole and a clear marker that the strategic commitment to research was the right choice, and that it is starting to already show results. The challenge now is to adapt, evolve and innovate by streamlining and bringing more focus to our curriculum. We have started the lengthy process for obtaining senate approval to create a specialized LLM in economic and business law by the 2015 - 2016 academic year. Such a degree will allow us to further improve our standing in the area of economic and business law, and to discover other legal areas in which we have a solid comparative advantage."

Mohamed Elmasry, assistant professor and director of the graduate program in journalism and mass communication, shared similar views. “We are honored to receive this ranking, which is a credit to many people who work hard on behalf of the program," he said. "We are determined to strive harder and make the program stronger. We have the talent, tools and motivation to compete with the best programs in the world.”

Headquartered in Paris, Eduniversal is a global ranking and rating agency that specializes in higher education. Created in 1994, the company offers annual rankings of the best 1,000 business schools across 154 countries, and rates the best 4,000 master’s and MBA programs in 30 specializations worldwide. Serving as an information platform, Eduniversal enables students to make the right decisions regarding the choice of their future studies anywhere in the world. The company’s global expertise provides to all stakeholders in higher education a wide panorama of perspectives and an in-depth view on academic expertise, with the ultimate goal of actively supporting international educational exchanges and encouraging mobility of students and lectures.