School of Business Among 1% Worldwide to be Triple Crown Accredited 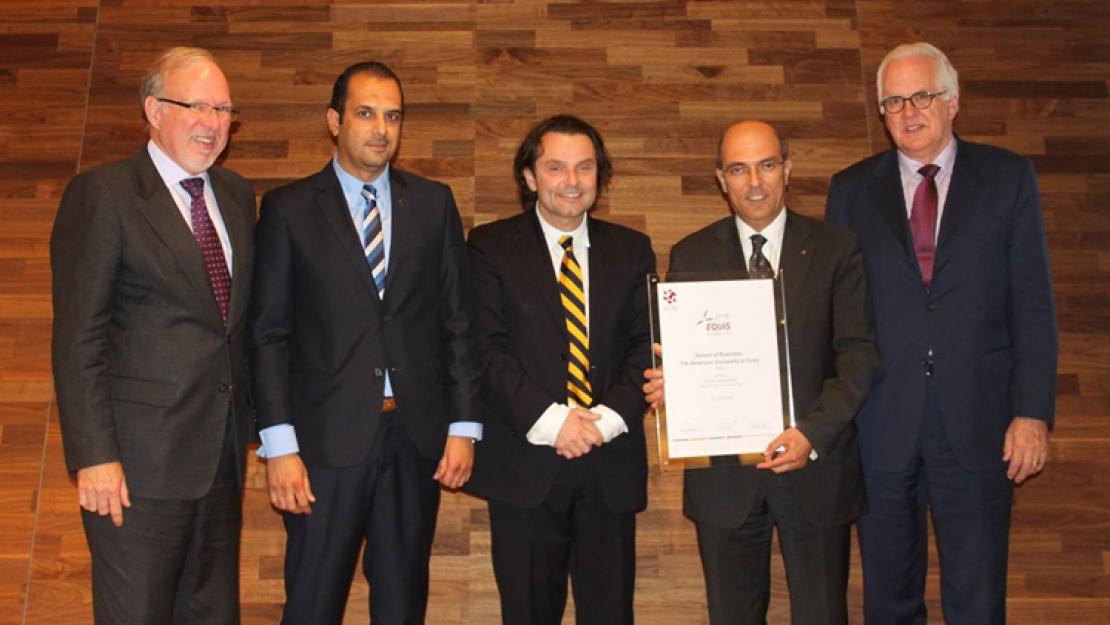 AUC’s School of Business has recently been accredited by the European Quality Improvement System (EQUIS), making it one of only 70 business schools worldwide — out of nearly 14,000 — as well as the first in the Middle East and third in Africa, to achieve triple-crown accreditation from EQUIS, the Association of MBAs (AMBA) and the Association to Advance Collegiate Schools of Business (AACSB).

“The triple-crown ranking — the most sought-after status for any business school around the world — is a testament to the global quality of the teaching and research taking place at the school,” said President Lisa Anderson. “It is a reflection of the caliber of the faculty, students and alumni. We are especially proud of this achievement, which places AUC’s business school in the top 70 globally and on par with the finest in the world.”

Sherif Kamel, dean of the School of Business, attributed this recognition to the school's continuous enhancement efforts over the past years. "The AUC School of Business has been working relentlessly and passionately over the last five years with its different stakeholders to create a culture of change and continuous improvement, and to transform assessment and accreditation from being a destination to being the ongoing driver for bettering our program and service offerings to cater to the needs of the society."

EQUIS is an accreditation system for management and business schools, administered by the European Foundation for Management Development. A high level of academic quality, professional relevance, innovation and internationalization is required to achieve EQUIS accreditation. EQUIS accredits programs that focus on the development of managerial and entrepreneurial skills. "It is invaluably inspiring to see the school, over such a short time despite the developments taking place in Egypt, become EQUIS-accredited, consequently triple-crowned, and making it in a better position to serve its community," said Kamel. "Having the school EQUIS-accredited as the first in Egypt and triple crown as the first in the region and one of only around 70 business schools in the world is a major accomplishment and a testament of the quality of its programs, faculty and staff."

In May 2014, AUC’s School of Business also received accreditation for its MBA and Executive MBA programs by the London-based Association of MBAs (AMBA). Only 2 percent of MBA programs worldwide are AMBA-accredited. In addition, since 2006, the school has been accredited by the Association to Advance Collegiate Schools of Business International — one of only 5 percent of all business schools in the world to receive such accreditation. “The AUC School of Business has a long tradition of academic excellence," said Karim Seghir, associate dean of undergraduate studies and administration at the school. "What makes the learning experience at the school so unique is the mix of the global perspective, innovative teaching techniques, experiential approach to business education and the multicultural and inspiring intellectual environment we provide."

In addition to the prestigious triple-crown accreditation, AUC’s MBA program has achieved high ratings from a number of international institutions and publications. According to Forbes Middle East, AUC hasthe top MBA program in the region, ranking first in 2012 among similar programs in 37 private universities in the Arab world. The MBA program at AUC was also among three graduate programs at the School of Business –– including the Master of Arts in economics and Master of Arts in economics in international development –– that are rankednumber one in Africa, according to the 2013 - 2014 Eduniversal ranking of top master’s programs. In 2012 - 2013, the QS Global 200 Business Schools Report, which rates business schools in different countries according to employer opinions, ranked AUC’s MBA program among thetop 200 MBAs worldwide, along with prominent universities such as Harvard, Stanford, Kellogg, INSEAD and the London Business School. The school’s executive education programs are also accredited by the Accrediting Council for Continuing Education and Training. Affirming the school's global reach and reputation with its newly acquired triple-crown accreditation, Kamel said, "This is another milestone reached in the school's long-term objective to be among the top small business schools in the world by 2019." Echoing the same sentiment, Seghir noted, “The leading role that the AUC School of Business has been playing in the Middle East and North Africa region for seven decades has been recognized by the most prestigious accreditation bodies — AACSB, AMBA and EQUIS. Less than 1 percent of business schools worldwide are triple-crowned, and we are proud to be part of this notable group." Photo caption: Sherif Kamel (second from right), dean of the School of Business, receives recognition in Vienna for the triple-crown accreditation