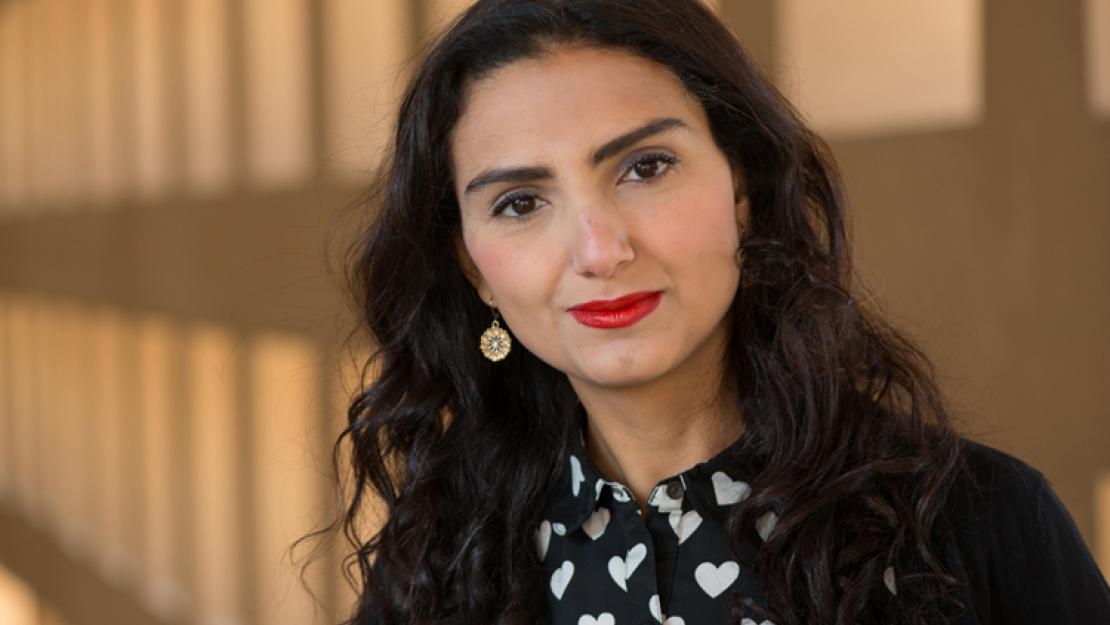 Language is often viewed as simply a means of communication, a tool for giving directions, delivering speeches or meeting people. But according to Reem Bassiouney, associate professor of applied linguistics, language is not just a way to communicate, but a principal means of expressing one’s identity, particularly during times of conflict.

“Language is at the core of who we are,” Bassiouney said. “It could be a classifying category for defining us, such as describing Egyptians as people who speak Arabic. But language can also be a way of expressing who we are.”

In her recent book, Language and Identity in Modern Egypt, Bassiouney argues that language is used in Egyptian public discourse to create a particular collective identity. By studying a variety of sources such as patriotic songs, films, blogs, TV talk shows, newspaper articles and novels from the 20th century until June 30, 2013, Bassiouney found that language plays an essential role in constructing an identity, essentially labeling who is an “authentic Egyptian” and who is not. “The main aim of constructing a distinct identity is to decide who is included and who is excluded from this large community called ‘Egyptians,’” Bassiouney explained. “Variables like language, ethnicity, locality, character traits and moral dispositions are criteria for inclusion and exclusion. There were numerous examples in this book of what I term an ‘exclusion-inclusion pattern of display’ by individuals in public discourse. This is defined as a pattern in which individuals display their stance of belonging or not belonging to a community, and also display their stance toward other individuals as belonging or not belonging to a community and nation. Individuals use social variables, including language, in this pattern of display.” To illustrate this point, Bassiouney noted how, during the January 25 Revolution, some loyalists tried to make the claim that the protestors in Tahrir Square were not real Egyptians because many spoke in English and were, thus, deemed as “not Egyptian” or “not representative of real Egyptians.” This rationale, she said, is steeped in social attitudes toward the English language. “While Egyptians rush to master English and teach it to their children, when someone is depicted as speaking English, his or her Egyptian identity is contested,” she explained. The revolutionaries, in turn, claimed that they were authentically Egyptian because of their command of the Arabic language, again showing how language expresses identity. Bassiouney pointed to the example of the Egyptian poet al-Jukh, who recited a poem on the Abu Dhabi television program, The Prince of Poets, using Standard Arabic, not Egyptian Colloquial Arabic, to “authenticate the identity of the Egyptians in Tahrir Square.” “I have now spoken,” he said. “My language is not English, and it is not even Egyptian Colloquial Arabic. It is the authoritative Standard Arabic, with all its powerful indexes.” Bassiouney argues that Standard Arabic is oftentimes associated with the Quran, Islamic jurisprudence and civil law so it connotes legitimacy. Because of this context, the poet employs Standard Arabic as an indicator for authentic Egyptian identity. “The poet al-Jukh had to use Standard Arabic to prove that the protestors were true to their cause and to Egypt,” Bassiouney said. “Through this poem, the revolutionaries in Egypt used language to show that they are indeed ‘real Egyptians.’” This, Bassiouney noted, is because language contains certain indexes, or connotations. Given certain contexts, Standard Arabic is often associated with legitimacy, Egyptian Colloquial Arabic is used to index authenticity, while an Egyptian speaking in English may connote respect or suspicion, she said. This concept extends beyond just code choice and even applies to smaller details, like the type of grammar used. For example, Bassiouney found that in several patriotic songs, the singers often use the third person pronoun (he, she, it or they), instead of the second person pronoun (you), to refer to a colonizer or an aggressive outsider. This was the case in Misr Tatahadath ’An Nafsiha (Egypt Speaks About Itself) by Umm Kulthum, when Egypt refers to colonizers in the third person plural, or in the case of the song Habibti ya Masr (Egypt, My Love) by Shadia, in which the person who does not understand Egyptians is referred to in the third person singular. “In my view, this manipulation of pronouns is intentional and intends to undermine the aggressive, unfriendly, unsympathetic outsider, while appealing to the insider or sympathetic outsider,” Bassiouney affirmed. “In that sense, even the use of certain grammatical constructs expresses who the real Egyptian is and who is the ‘other.’ This way, linguistic resources are employed to index attitudes and ideologies through a stance-taking process.” Bassiouney hopes that this research will provide non-Egyptians with a deeper understanding of the perspectives and actions of Egyptians. “It’s important for outsiders to know about public discourse in Egypt because sometimes for an outsider, you can sound aggressive or snobbish if you don’t understand the context of a discourse of any country,” Bassiouney explained. “When you do, you are then able to understand why people are behaving the way they do and why they are making these decisions. It becomes easier to deal with people. My hope, on a broader sense, is that this research will facilitate communication between people from different cultures. It’s important for Egyptians to think about how they learn everything. You know who you are, but it’s good to know the mechanism about how you reached ‘who you are.’”