Q&A: The Search for the Next AUC President 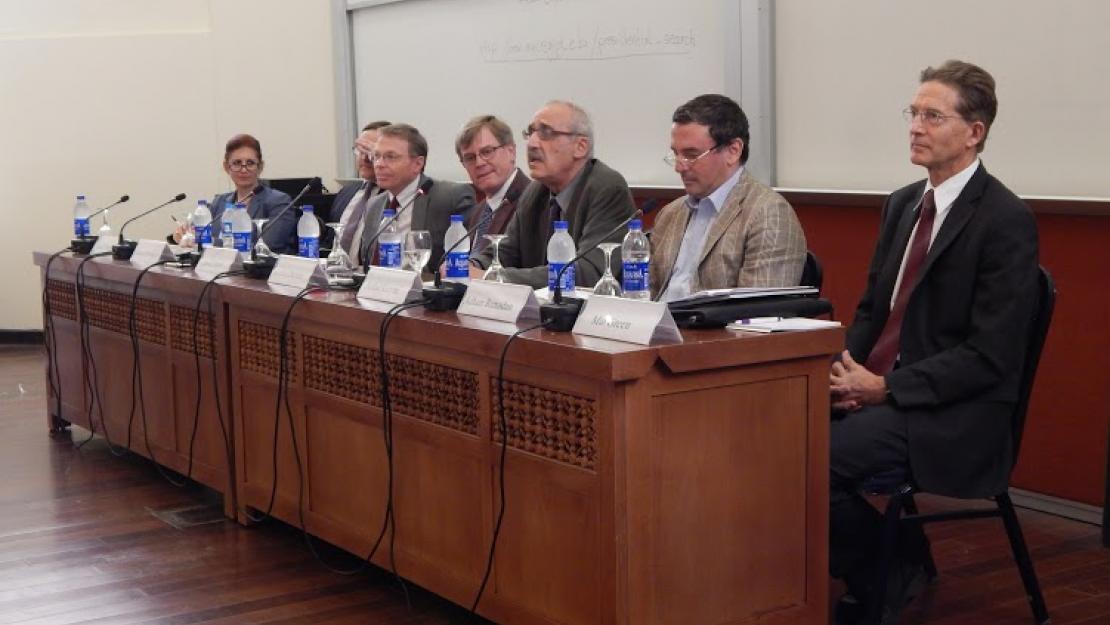 With AUC President Lisa Anderson stepping down at the end of the fall semester, a Presidential Search Committee comprised of 10 AUC trustees and three faculty members has been formed to lead the international search for her successor. To keep the AUC community updated on the search process, News@AUC met with AUC trustees and committee co-chairs, Farhard Kazemi, professor emeritus of politics and Middle Eastern studies at New York University, and David A. Tirrell, the Ross McCollum-William H. Corcoran Professor of Chemistry and Chemical Engineering at the California Institute of Technology.

The search committee began its work last summer. What are the major updates since then?

The Presidential Search Committee convened for the first time during the June 2015 Board of Trustees meeting in New York. We discussed the process with the board and decided on the need for a search consultant. Three major search firms were interviewed and Russell Reynolds was selected, being one of the most globally recognized and experienced consultants in higher education presidential searches. After laying out the position description outlining the responsibilities and key priorities for the next AUC president, a presidential search website was established and electronic surveys were sent to each of the main AUC constituents: faculty, staff, students and alumni. Last week, several of us on the committee conducted a campus visit.

What is the main purpose behind the search committee’s campus visit?

Early on, the Presidential Search Committee agreed that it is crucial for the committee chairs to get direct, face-to-face feedback from the AUC community. Surveys were sent out to more than 30,000 AUC community members, and after the academic year began and things settled down, we set up forums and meetings to hear feedback, suggestions and nominations from students; alumni; parents; as well as faculty, staff and senate members. So far, we’ve had interactive, lively discussions and a broad spectrum of thoughtful and balanced views. It’s been a very healthy exchange of ideas.

How are these forums different from the surveys that were sent out?

The surveys are complementary support tools to draw up recommendations and solicit nominations. The forums, with their one-to-one interactions, are invaluable and help us dig more deeply into the ideas set forth and tell us if the criteria and issues we have in mind are consistent with those shared with us at the forums.

What are the absolute must-haves in the next AUC president?

The next AUC president must have the foresight and personal stature to not only lead and represent the AUC community to the outside world, but to also build on and synthesize the ideas of the AUC community into an appealing, pioneering and strategic vision. Institutional management is also an important criterion, whereby the next president should understand how large organizations work to ensure sound financial and operational management, and be able to put together a talented team that would make efficient use of the University’s resources, promote academic excellence and foster a culture of transparency. A solid foundation of fundraising and institutional advancement principles and best practices is also a must. Leading an institution with a long history like AUC, the next president should have empathy, sympathy and knowledge of Egypt and the Middle East, and should be able to build effective relationships with a broad range of constituents inside and outside the University including faculty, staff, students, alumni, parents, administrators, Board of Trustees members, community leaders, donors and potential donors.

What specific traits were mentioned at the forums?

At the forums, emphasis was placed on the next president having open channels of communication with the different AUC constituents, whether students, faculty, staff or alumni; building and maintaining a sense of community on and off campus; having a good understanding of academic institutions, but not necessarily coming from an academic background; fostering transparency and adopting clear rules and regulations; and finally, enhancing AUC’s highly valued mission of being of service to the community at large, whether through continuing education, career centers at public universities or community engagement programs.

Did you receive nominations for the next president?

Yes, lots of nominations were sent to Russell Reynolds, so we now have a long list that will be reviewed and screened by the Presidential Search Committee and Russell Reynolds.

AUC President Lisa Anderson will step down at the end of the semester. Will the committee have chosen a new president by then?

We’re hoping to have selected a successor to President Anderson by January 2016. If not, an interim or acting president will be appointed until the appropriate candidate is chosen. The appointment of an interim president is common practice at many universities and has happened before on several occasions at AUC.

How can members of the community express their ideas to the committee?

In addition to attending the meetings and forums that were held on campus, a direct email address has been set up for any inquires or suggestions, AUC.president@russellreynolds.com. We will also be back on campus in late October and intend to continue to provide regular updates through News@AUC, email and the search website.