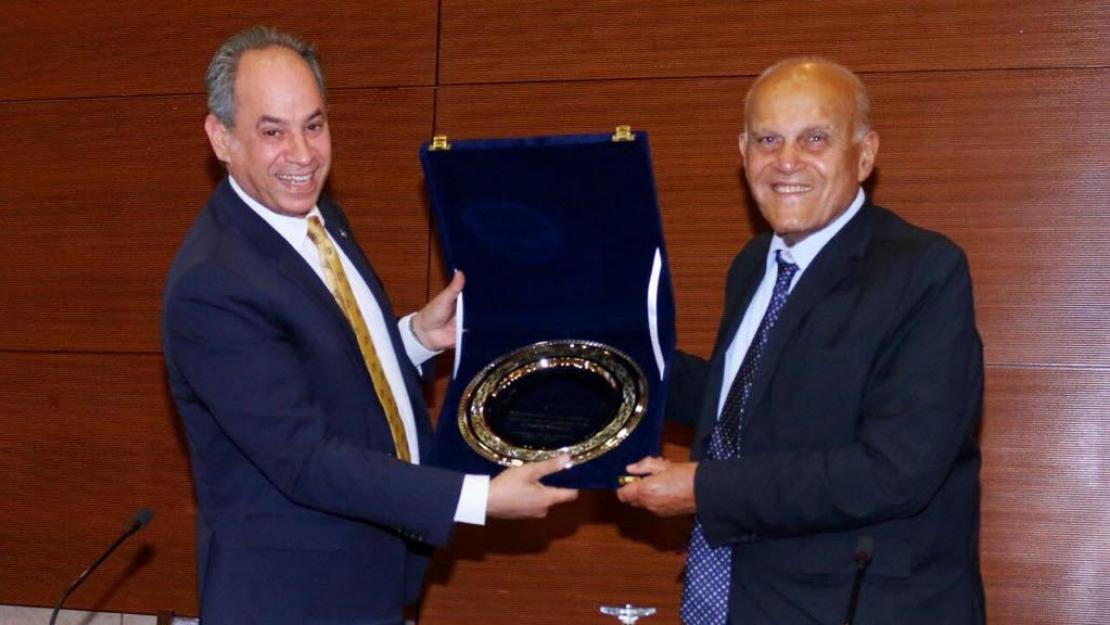 “Science and medicine offer unprecedented opportunities for discovery and, most importantly, alleviating human suffering, … and creativity and innovation … [are] essential for achieving any target in research," Yacoub affirmed in his speech titled “Creativity: An Illusive Target" at AUC's 2018 Research and Creativity Convention.

Professor of cardiothoracic surgery at the National Heart and Lung Institute, Imperial College London; founder and director of research at the Harefield Heart Science Centre; and founder of the Magdi Yacoub Heart Foundation, Yacoub ran the gamut with definitions of creativity, from Greek mythology to tissue transplantation and gene editing. “It means different things to different people,” he said.

Yacoub’s humbleness was evident as he began to discuss innovations and technicalities in his own field of medicine, quoting peers and role models and celebrating their major contributions. Highlighting the need for more creativity to help treat the patients he and his team have yet to be able to help, he noted “The massive problem exists when 80% of the world’s population has no access to recently acquired knowledge and benefits. Who cares, who acts [and] who pays are things that need to be addressed, and we’ve been working very hard on that in the last few years. The Aswan Heart Centre is an expression of [this effort] because there is really a neglected community that needs to have the latest in science and technology to treat their hearts. … With maturity comes accountability, and we have to do better than that. We need to be creative.”

But what is creativity?

Although Yacoub doesn’t deny the spontaneity of creativity, he also noted that this can be a bit of an exaggeration.

As sudden as creativity may seem to be, for Yacoub it’s all about the active focus you lend to your work, which can translate into your subconscious mind and produce new ideas. “I cannot stress the word ‘focus’ [enough],” he explained. “Focus, and when you are preoccupied by something, your inner mind, whatever that is –– different parts of the bran do different things –– carries on trying to solve the problem. Even when you think you’re not thinking about it, you’re still thinking about it.”

It’s not just about a single brain, though, Yacoub emphasized, echoing Nobel Laureates he watched being asked to discuss creativity on a BBC program. “The second point, which they all agreed [on] –– I cannot agree more with them –– was teamwork,” he said. “I cannot stress that point further. You cannot clap with one hand. You really need two hands. You need a lot more. You need people. You need minds. You need everybody. Don’t be frightened of working with a team.”

Urging audience members not to shy away from collaboration, Yacoub also brought in the importance of being refuted. This is where team members can also come in handy, he noted. “Peers come to our rescue with refutations,” he said. “Papers knocking you down –– don’t be cross. They’re pushing you toward the truth. And accepting other people’s criticism is absolutely essential in humility, and if somebody says ‘I know it all,’ you can be sure that he knows nothing.”

When asked about his vision for the future of the Aswan Heart Centre, his answer was sustainability and further collaboration. “You cannot exist in a vacuum or in isolation; you need collaboration,” he concluded, underlining the need for all kinds of contributors, from technicians and doctors to those in the humanities.

Still, he hopes that the essence of the Aswan Heart Centre and its vital services are upheld 20 years down the line. “I’m for purity, making sure that it’s all for free for everybody, disregarding color, religion, creed, age, money. Forget the money,” he said. “It’s a human right.”