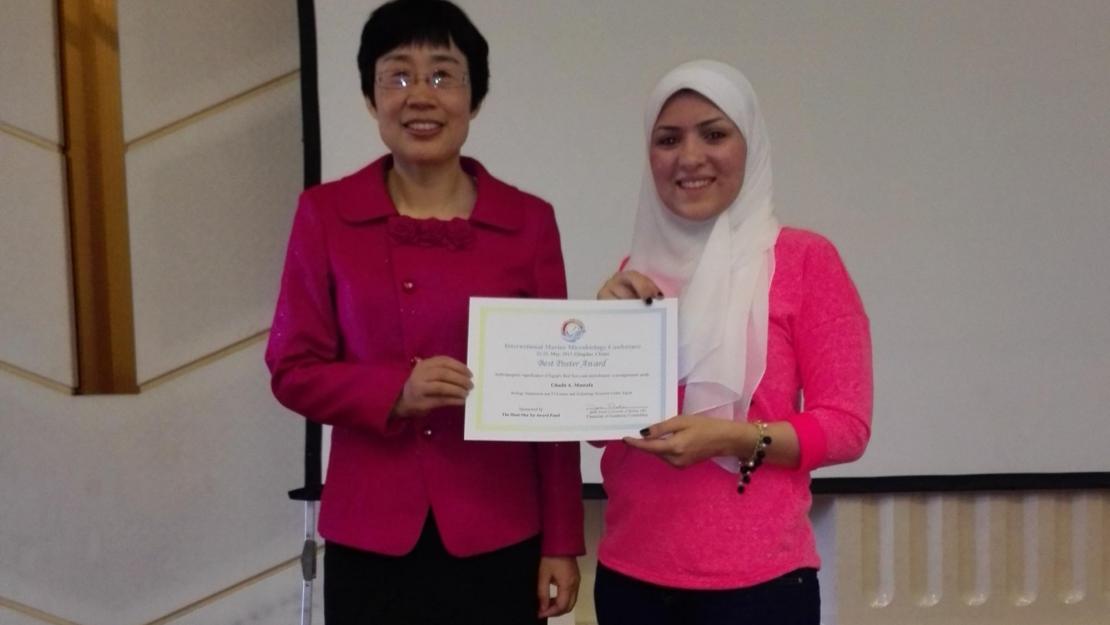 Microorganisms may be small, but according to Ghada Mustafa, PhD candidate in AUC’s biotechnology program, they offer a critical look into pollution’s impact on marine life.

“Microorganisms make up more than 90 percent of the ocean biomass, making them the main players in determining the levels of carbon, nitrogen and oxygen in aquatic ecosystems,” said Mustafa, who recently received the Best Poster Award at the International Marine Microbiology Conference in Qingdao, China. “Therefore, any disturbances to these microbes from pollution disrupt the natural chemical and nutrient levels of seawater. Because of this, they are the ultimate tool to study the environmental impact of pollution on marine life.”

Mustafa’s most recently published article, “Egypt's Red Sea Coast: Phylogenetic Analysis of Cultured Microbial Consortia in Industrialized Sites” co-authored with Rania Saim, chair of the biology department, as well as Amr Abd-Elgawad from the Ministry of Tourism and Alyaa M. Abdel-Haleem, former research assistant in the biology department, focuses on the impact of industrialization and pollution on the diversity of microorganisms. It is one of only a few studies that examine microbial marine life along the Egyptian Red Sea coast and the first to offer a comprehensive analysis of these microbial communities. “Our team was the first to scan the Egyptian Red Sea Coast to comprehensively examine the microbial communities that live at different sites,” said Mustafa.

Funded by AUC’s Yousef Jameel Science and Technology Research Center and led by Siam, the project had the AUC team researching the use of microbes as biological indicators of pollution and defining different types of pollution that exist. “I believe our work will fill a gap in environmental research about the Red Sea,” noted Mustafa.

Comparing samples from protected as well as heavily polluted areas, including ports and touristic resorts, the team found that pollution has already altered the microbial structure of these sites, potentially causing serious environmental damage. One prominent example is the Solar Lake in Taba. “The Solar Lake has been well-documented since the 1960s as having high levels of blue-green algae, also called cyanobacteria, which are very important oxygen-producers,” Mustafa explained. “But through our research, we sampled in two different years and didn’t detect any cyanobacteria in that lake at all. This suggests that pollution in the area caused a major environmental change that will have serious ecological consequences in the future.”

Pollution in Egypt and worldwide has serious environmental consequences, disrupting the marine ecosystem and negatively affecting the evolution of microorganisms, added Mustafa. “We must consider the global impact of pollution and industrialization along the Egyptian coast,” she said. “Any pollution in the Red Sea is greatly magnified because the sea is small, almost landlocked, with slow water turnover, and it is bordered by eight countries. Activities like oil drilling and the building of touristic resorts have a direct impact on the environment and on life in the Red Sea and along the coast.”

Ultimately, this research will be used to build a database of microbial classifications as pollution indicators that can be used by other researchers, conservationists and governing authorities to study the impact of marine pollution, explained Mustafa. “Now, we are planning to develop microbial kits that will determine water quality based on the microbes that live there, which would, in turn, help us understand the dominant pollutant present in the area,” she said. “This will provide the foundation for future conservation and protection strategies.”

Reflecting on her work, Mustafa noted that her experience representing the University abroad, such as her recent participation in the International Marine Microbiology Conference in China, helps inspire her research. “Here at AUC, we do bigger work,” she affirmed. “We stand apart from other schools because students like myself have the opportunity to be involved in contemporary research that has a direct impact on Egypt and the region using the most advanced technologies in the field. I look forward to collaborating with my peers at AUC and abroad throughout the next steps of this research.”