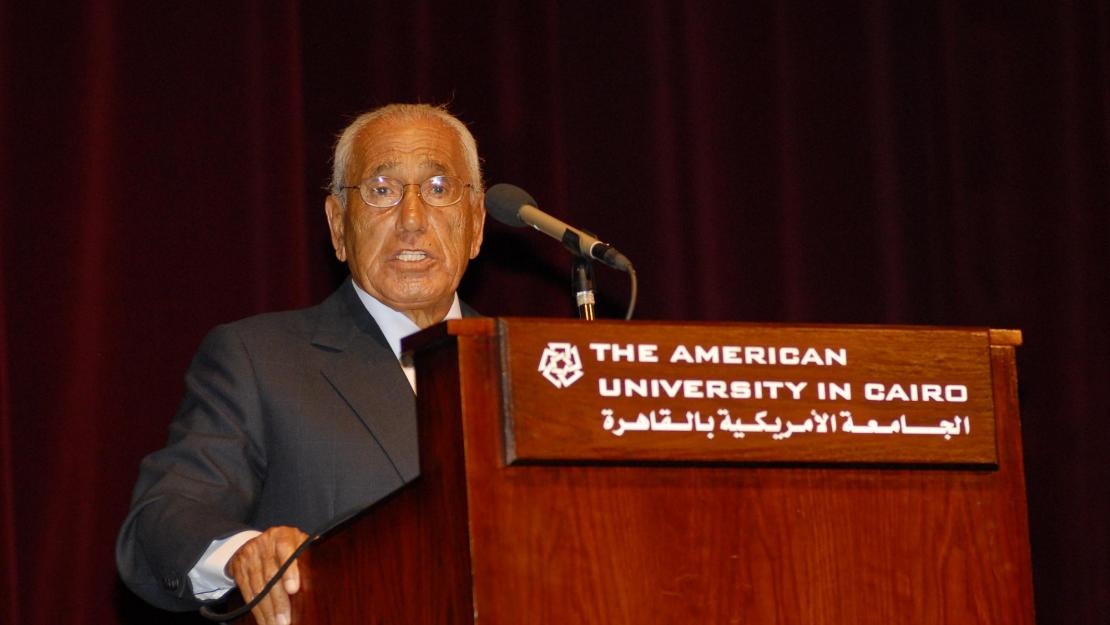 The late Mohamed Hassanein Heikal, leading Egyptian journalist and a respected commentator on Arab affairs for almost six decades, is remembered primarily for his journalistic passion and chronicling of Egyptian history. He was “the dean of Arab political commentators,” as described by The New York Times.

“Throughout his career, Heikal saw himself first and foremost as a journalist,” said renowned commentator Fahmi Howeidy, as quoted by Al Ahram. “He took on other tasks at certain moments, and he was certainly an incredible source of information and obviously a remarkable and well-informed writer and commentator, but –– ultimately –– he saw himself as a journalist, and he acted as such every day of his life until the very last day when he was too ill to continue.”

Delivering the keynote speech at AUC’s undergraduate commencement ceremony in 2007, Heikal spoke about the transition from one generation to the next.

“I stand before you, a man who belongs to a generation that is entering its twilight while around me is a generation seething with vitality and renewed hope,” he said. “I saw wars, revolutions, coups, periods of progress and others of regression. I watched as they germinated and then raged across our homeland, our region, our world. … Yet here among you, I feel surrounded by the signs of a new dawn, can sense the first rays of the sun as it climbs into open skies to herald the birth of a new day.”

Presented with an honorary doctorate, Heikal expressed his gratitude to AUC, but explained his reasons for declining the award. “The citation on which AUC based its decision to honor me fills me with a profound gratitude,” he said. “Simply reading it was sufficient to convince me that to expect anything further would be a kind of excess. [However], in the case of the journalist, the offering of honors is best left to readers whose appreciation can be measured in their interest in what the journalist writes and the trust they place in that writing. This, as some of you may know, is a rule I have always applied to the presentation of medals and other honors offered by states and professional or academic institutions in both the Arab world and beyond.”

Heikal also visited AUC in 1995 and October 2002, when he spoke at Ewart Memorial Hall on “The Future…Now.” In his lecture, Heikal highlighted Egypt’s history of political leadership and the policies and reforms that distinguished each president from 1952. Projecting to the future, Heikal called for the development of a progressive vision for Egypt characterized by transparency, constructive dialogue and clear, strategic goals.

At AUC, the Heikal Department of Management was named by Mohamed Hassanein Heikal’s son, Ahmed M. Heikal, chairman and founder of Citadel Capital. His granddaughter, Hedayat Heikal ’06, received the President’s Cup and Parents Association Cup from AUC in 2006.

Life as a Journalist

Heikal was editor-in-chief of Al Ahram from 1957 to 1964 and wrote a weekly analytical column in the newspaper, “Frankly Speaking” which was one of the main reasons Al Ahram was described as The New York Times of the Arab world under his tenure (Encyclopedia Britannica). He also set up Al-Ahram Strategic Studies Centre. At the beginning of his career, he worked for the Egyptian Gazette and Rose Al Yousef and subsequently served as editor of Akher Saa and the daily Al-Akhbar.

A longtime confidant and patron of former Egyptian President Gamal Abdel Nasser, Heikal authored 40 books, with firsthand accounts of historical events, including Nasser: The Cairo Documents (1972), The Road to Ramadan (1975), Sphinx and Commissar (1978) and Autumn of Fury (1983). He was a member of the Central Committee of the Arab Social Union (1968 – 1974) and minister of national guidance (April - October 1970).

After Nasser’s death in 1970, Heikal remained editor of Al-Ahram until 1974, after which he became a freelance journalist. In 2007, he hosted a series of lectures on global events titled Ma’a Heikal (With Heikal), broadcast on Al Jazeera TV channel.