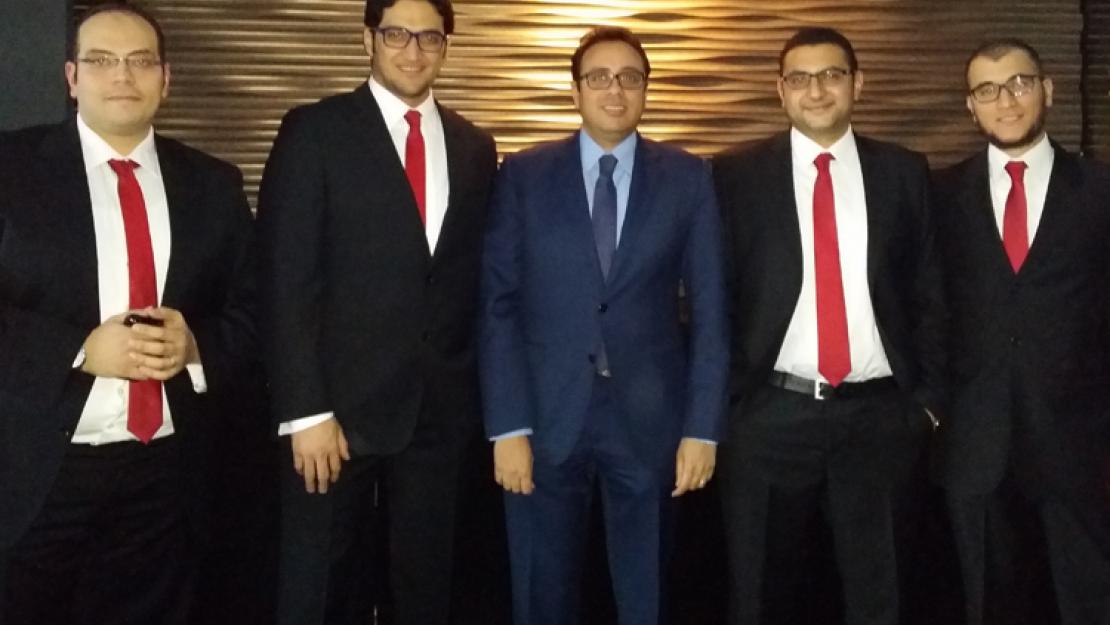 A team of four MBA students won fifth place worldwide at the Aspen Institute’s 2014 Business and Society International MBA Case Competition, the final round of which was recently held in New York. The competition included 25 teams from around the world and more than 1,000 MBA students hailing from prominent institutions such as Northwestern University, the University of London, Wilfrid Laurier University and Boston University. AUC's qualification for the final round of the competition marks the first time for a country outside the United States, Canada and Europe to be represented in the last round of the competition.

“The feeling of receiving international recognition from a global institute can’t be matched,” said Mostafa Siraj, explaining his reaction during the final round of the competition, when the AUC students presented their ideas to a panel of judges, including senior corporate executives, and received fifth place. “Happiness, self-contentment and pride were among the mix of emotions I had back then.”

The team — which included Mostafa Siraj, Ali Ahmed Salama, Sherif Yehia and Ashraf Amer — had to create a marketing strategy for a case study produced by the Yale School of Management and Tecnologico de Monterrey. The study focused on a grain product processed in rural Mexico. In the first round of the competition, AUC business students competed amongst each other to create a winning written proposal. Siraj, Salama, Yehia and Amer won against seven other AUC teams, and their proposal was submitted to a panel of academic advisers at the Aspen Institute. The AUC team’s proposal was selected as one of the top five among 25 submissions worldwide. “Qualifying for the first and second rounds was pretty amazing, as we were over the moon when we found that we were selected between the eight AUC teams in the first round, and even more excited when we qualified as one of the five finalists between the globally participating schools in the second round,” said Salama. The process behind creating the marketing strategy was extensive. “To manage these types of cases, Yale raw cases, we went into a closed camp for the assigned number of days to keep the team effort up,” explained Salama. “Then, we read the case individually before starting to brainstorm ideas to select the best solution to pursue. Finally, when the solution was agreed on, we dug as deep as applicable into the solution to tackle every single detail about our proposal versus the case, even by forecasting five years of financial statements.” The students attributed part of their success to the diverse background of the team members. “I recognized the value of teamwork in winning this competition,” said Siraj. “I have lots of friends from the MBA program at AUC, and the challenge was to form a team that had a mix of all talents with huge synergies. We had a rich mix of profiles among our team: Ashraf is an HR expert working for a telephone company; Ali is a marketing manager working for a pharmaceutical; Sherif is an operations manager working for P&G, and I am working in IT for a telephone company, with talents in business strategy and HR management. This mix was the real reason for our success.” In addition, the team members acknowledged the immense support provided by AUC. “Being in a technical career, I came to AUC with almost no knowledge in business,” Siraj explained. “I owe AUC every skill and piece of information I know about business.” He added, “The business consultancy course was also a great aid in solving cases. The experience we gained from this course and the knowledge we gained from the course’s respected professors, Dr. Ahmed Tolba and Dr. Ayman Ismail, can’t be matched. The administration also facilitated all the logistics we needed to be in New York. Without the support of Dr. Ahmed Abdel Meguid [MBA director], some of us wouldn’t have been able to make it to New York.” The competition was a learning experience in and of itself for some AUC team members. “This competition was very beneficial for me on the professional level,” said Amer. “It also gave me a global vision on how business works and complemented the theoretical knowledge we receive as MBA students.” Echoing the same sentiment, Yehia added, “Entering the competition was a great opportunity for our team to practice our business experience skills in a challenging environment. It was a great opportunity to assess our skills and capabilities versus MBA students from AUC and, most importantly, to assess our level versus global and top-notch students from around the globe. The experience proved that we as AUCians have what it takes not only to compete locally, but globally as well.” The Aspen Institute’s Business and Society International MBA Case Competition was founded in 2010 and consists of three rounds. The first round is where the case study is released to the 25 competing schools and teams compete amongst their campus peers. In the second round, a panel of academic advisers to the Aspen Institute review all written responses by the 25 first place on-campus teams and in the third round, five finalist teams present their ideas. “Our participation in international competitions such as the Aspen Institute competition is in line with the school’s mission, which focuses on principled and innovative business leaders and entrepreneurs who can make a difference," said Ahmed Abdel Meguid, MBA director. "Furthermore it is an effective channel to implement the school’s internationalization strategy. A unique feature of this competition is its inclusiveness. Various AUC School of Business stakeholders participated in this competition, which is a great reflection of our teamwork spirit." ​Photo caption: Ali Salama, Mostafa Siraj, adviser Ahmed Abdel Meguid, Sherif Yehia and Ashraf Amer at the competition in New York