Light It Up Blue: AUC Lights Up Portal for World Autism Awareness Day 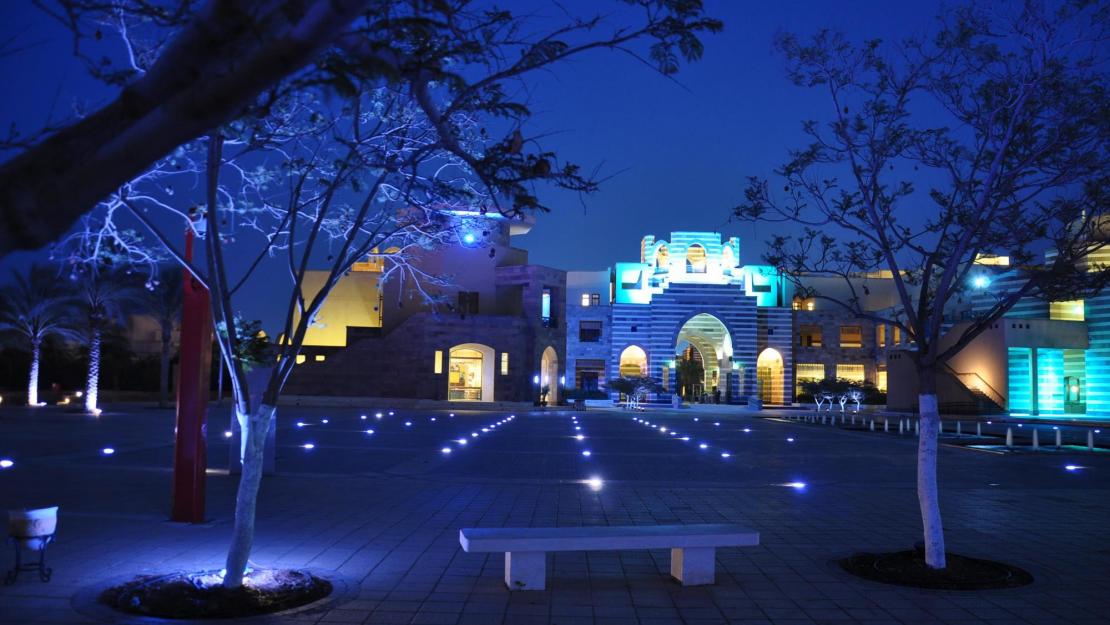 As part of the Light It Up Blue global campaign for World Autism Awareness Day, the AUC portal will light up in blue on April 1 and 2. This is the third consecutive year that AUC participates in this initiative. In previous years, the Cairo Opera House, the Citadel and the pyramids were lit in blue, marking this worldwide event.

In addition to lighting up the portal, AUC is hosting its first disability conference on April 6, titled Removing Barriers in Education Settings to Create an Inclusive and Accessible Society. “Our aim is to create open communication channels with regard to resources and accessibility for students with disabilities,” explained Alexandra Gazis assistant director of the Office of Student Support. “We also want to improve understanding and encourage more support for students with disabilities, especially in educational settings.”

The conference will feature academics and professionals from AUC, as well as NGOs working in Egypt on different areas of disability. There will also be presenters from the National Council for Disability Affairs and the Egyptian parliament. Three conference sessions will cover autism, focusing on the challenges that autistic students face and how to utilize effective technique to create accessible classrooms for them. “This is just the first step in bringing together professionals in the field to AUC,” said Gazis. “It’s also an opportunity to showcase the University’s resources and expertise. We hope that professors, teachers, counselors and key people in organizations working closely with persons with disabilities can attend and benefit from the conference.”

At the conference, Magda Mostafa, associate professor in the Department of Architectural Engineering, will present her pioneering research on autism-sensitive architecture and will launch an autism inclusion project. After Mostafa was asked to design Egypt’s first center for autism in 2002, she was troubled by the lack of evidence-based research on designing buildings that suit the needs of autistic individuals. "Inclusive design, at least from the built environment perspective, is surprisingly exclusive, focusing primarily on physical challenges such as mobility, vision and hearing," said Mostafa. " 'Invisible' challenges such as autism are not part of that conversation. We are hoping to change that at AUC by supporting an inclusion program for students on the spectrum of autism."

Mostafa's experimental research project explores how to design classroom spaces with minimal sensory input to increase the attention span, reduce response time and improve the behavioral temperament of autistic students.  From her research, Mostafa created the Autism ASPECTSS™ Design Index as a guide for building inclusive environments for autistic individuals.

"What I hope to contribute, which would be novel, is to create a series of ASPECTSS classrooms and other learning and social environments across AUC to help support that inclusion in a meaningful way. These would be the first higher education learning environments to apply ASPECTSS worldwide," explained Mostafa.  " I believe we would be the first in Egypt, if not the Middle East, to do so in an institutionally supported structured way."

Designated by the United Nations on April 2 of every year, World Autism Awareness Day encourages efforts to raise awareness of children with autism and bring attention to this often-misunderstood neurological disorder. International organizations and institutions are organizing fundraising and awareness-building events to promote understanding and research on autism.

According to autismspeaks.org, Autism is often misunderstood and misdiagnosed because there are no medical tests to identify it. Instead, specially trained physicians and psychologists conduct behavioral evaluations. Even if a child exhibits symptoms, doctors unfamiliar with the disorder can dismiss unusual behaviors and delay diagnosis and treatments, so awareness is particularly important for parents, educators and medical professionals alike.  In addition, identifying autism and autism spectrum disorder can be difficult because each autistic individual is unique. Autism is manifest, in varying degrees, by difficulties in social interaction, verbal and nonverbal communication, and repetitive behaviors.

Gazis explained that the challenge for educational institutions is twofold. “Inclusiveness for students with disabilities is not only about techniques, accommodations and methods, but also about effective communication and raising awareness for the whole community,” she said.