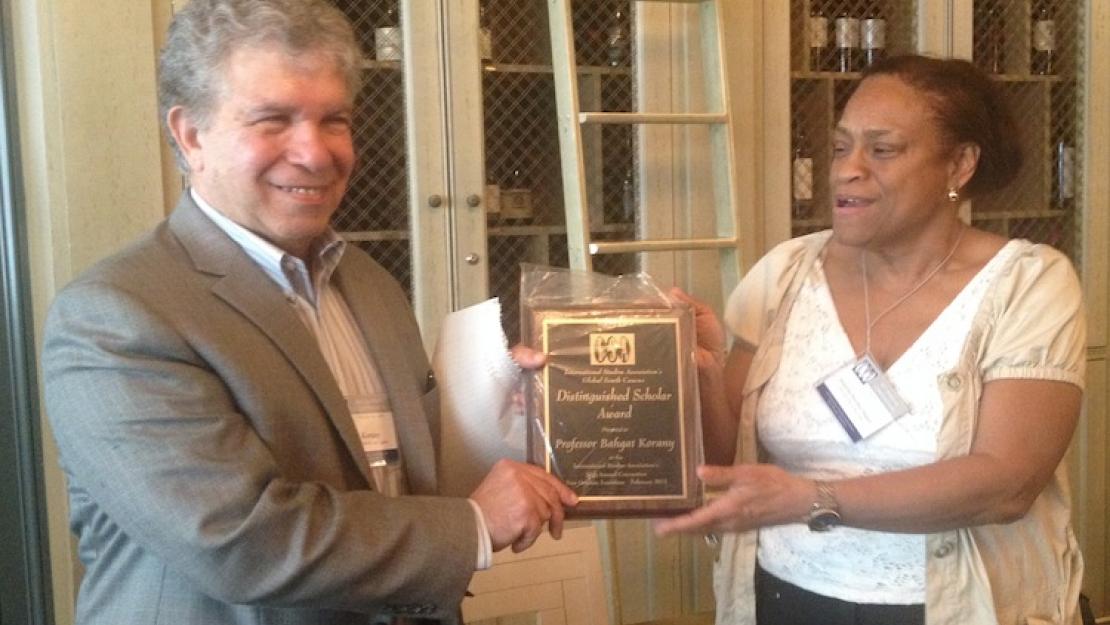 Bahgat Korany is the first Arab to receive the Global South Caucus Distinguished Scholar Award for his contributions in the field of international studies.

For the first time in its history, the International Studies Association (ISA) has awarded an Arab scholar, Bahgat Korany, professor of international relations and political economy at AUC and director of the AUC Forum, the 2015 Global South Caucus Distinguished Scholar Award for his contributions in the field of international studies.

“Bahgat Korany's welcome recognition by the ISA Global South Caucus symbolizes the increasing limitations of the U.S.-dominated international relations discipline and the imperative of recognizing and welcoming those 'other' perspectives, which are in fact the new mainstream," said Professor Timothy Shaw, director of the Governance-Human Security program at the University of Massachusetts, who introduced Korany during the award ceremony. "AUC should be proud of such an eminent, respected and appreciated 'senior' professor –– a cherished global citizen. We all express our indebtedness to Bahgat and his analyses/networks, as recognized through this timely award.”

Founded in 1959 and with more than 6,000 members in North America and around the world, the ISA advances research and education in international affairs. The Global South Caucus is dedicated to promoting international studies scholarship and research on the global south. The Global South Caucus Distinguished Scholar Award is presented annually to scholars who provided "exceptional and sustained contribution to global south international studies, as reflected both in published works as well as policy contributions" (www.isanet.org).

“I am very honored, as this is the first time this award is given to someone from the Arab world,” said Korany, who highlighted how the field of international relations doesn’t reflect the world we live in, although –– by definition –– it is supposed to be the most universal and representative field. “In 1977, Harvard Professor Stanely Hoffmann criticized international relations as being 'an American social science,' almost as American as an apple pie. About 40 years later, has this situation changed?” Korany speculated during his speech at the award ceremony.

The situation has not changed, according to Korany, who analyzed 14 textbooks and two recent handbooks in the field of international relations. “The contents of these handbooks, in addition to the 7,762 references used, show that this field is anachronistic and parochial," he said. "Worse, it tends to be incestuous, as the authors tend to cite each other in an essentially Anglo-Saxon field."

Korany also believes that international relations as a discipline tends to speak in English, “even American English," he noted, "while influential world problems such as development issues, impact of religion on international behavior and specific foreign policy decision-making patterns outside the West are marginalized or squarely bypassed." For example, he noted, "interest in Al-Qaeda began only after 9/11, even though this nonstate organization was spreading from Yemen to the Sudan to Afghanistan for years.”

Addressing the solution, Korany argues that "scholars working on the ‘non-West,' either from within or from outside, have a responsibility to know thoroughly the field as a whole and not only their geographical areas. They should focus on developing a critical approach to the discipline's main concepts and methodologies rather than mimicking them."