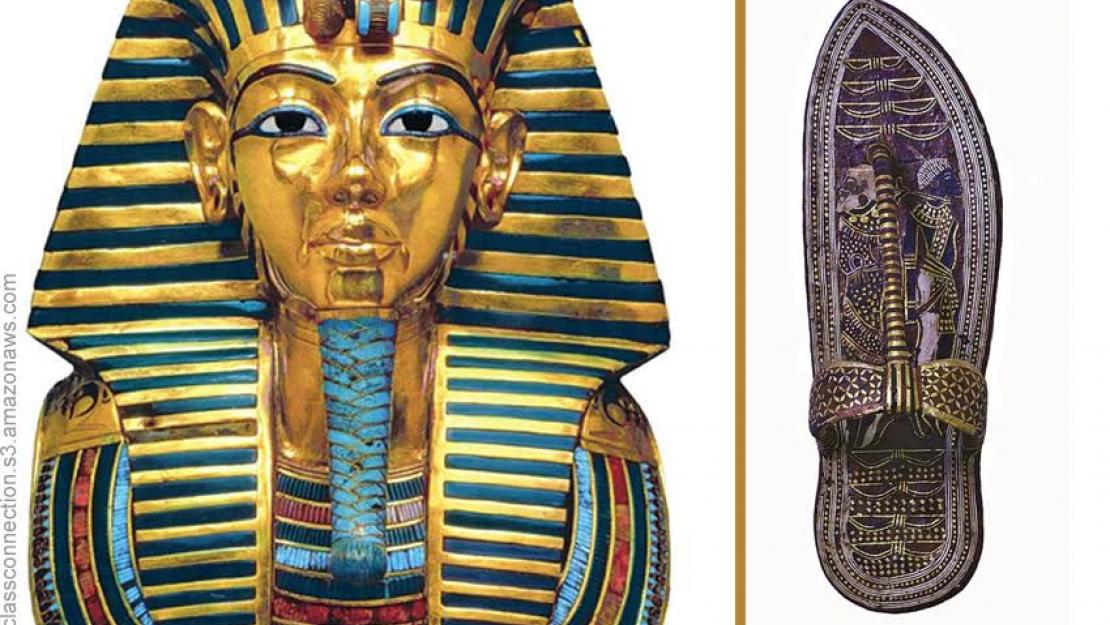 Marquetry veneer sandal from the tomb of Tutankhamun (Carter No. 397). Photograph by André J. Veldmeijer. Courtesy of the Ministry of Antiquities/Egyptian Museum Authorities.

The latest exhibit at the Egyptian Museum in Cairo lets visitors take a walk in King Tut’s shoes.

A joint effort by André Veldmeijer, visiting research scholar at AUC and ancient footwear expert, and Salima Ikram, renowned Egyptologist and AUC professor, Stepping Through Time: Footwear in Ancient Egypt features shoes from more than 5,000 years worth of Egyptian history.

The exhibition offers visitors and researchers a new look into daily life in Ancient Egypt, noted Ikram “People are always focusing on the statuaries or the paintings," she said. "They’re forgetting the Egyptians were people like you and I. By looking at something like footwear, this exhibit brings the Egyptians to life and engages people on a different level.”

Previously overlooked by researchers, Ikram explained Egyptologists’ newfound interest in footwear. “There are many reasons why we study shoes: because shoes are fabulous; because they’re a fashion statement and tell you a little bit about what social class you are; because in depictions sometimes you see them and sometimes you don’t; because they give us a look into the technology of the day; and, of course, because André himself loves shoes. We think he’s the Imelda Marcus of the archaeological world.”

This new research rethinks the importance and even the existence of footwear in Ancient Egypt, challenging traditional academic thought, said Veldmeijer. “When footwear is mentioned in general books, if at all, it is usually noted that sandals were flimsy and most people were barefoot all the time," he noted. "Moreover, they say there were only few types of sandals. This is a misconception, probably based on artistic depictions alone. The variety of footwear is much greater than imagery suggests and even includes shoes that are never depicted; we only know them from the archaeological record.”

He added, “You can see the various steps used by the Egyptians to turn sandals into completely closed shoes — the evolution of a new form.”

Veldmeijer argued that Ancient Egyptian footwear had deep symbolic meaning. “Footwear is much more than just protection for our feet," he explained. "There is an even deeper dimension that is often quite comparable to the emotions and reasons people wear certain pieces today: status, symbolism that is sometimes religious, expressing you belong to a particular scene, et cetera. It gives a glance into human behavior.”

Ikram agreed, pointing out that, just like today, Ancient Egyptians wore shoes to make a statement. “When people see a beautiful pair of shoes now, don’t they all go, “Wow?” I think the Egyptians were very much in tune with having everyday footwear and ‘wow’ footwear,” she said.

For researchers, the wow-factor is in the craftsmanship. “The technology employed that’s the most wow thing for us, looking at the detailed, minute, skilled craftsmanship of the Ancient Egyptians is really mind blowing,” Ikram explained. “With some of Tutankhamun’s shoes, they used bits of gold, birch bark, bone and maybe even glass inlays to decorate and create luxurious and glamorous footwear.”

Studying how the Egyptians made such luxurious footwear, researchers discovered that the ancient Egyptians adapted and maintained traditional styles and technologies throughout millennia. “It’s interesting to see that there are not too many advances in the technology, but we do see things that were established and then carried on,” Ikram noted. “For example, there’s skeuomorphism, that is something originally made in one material is translated into something of far more precious material. Sometimes you have fancy footwear that looks like regular footwear, but it’s made out of gold or it has gold accents.”

Connecting the past and present, Veldmeijer and Ikram hope the exhibit will give visitors a better idea of what life in Ancient Egypt was really like. “Everyone should go and look at the exhibition because I believe they will be astonished by the rich world of footwear from Ancient Egypt, and it might make them think of the ancient Egyptians in a completely different light," said Ikram. "At this point, that’s what our goal is, to open people’s eyes to the Egyptians as human beings and to let them feel a sense of connection, kinship and continuity with the past.”

The exhibition will run from October 11 to December 31 in Room 44 of the Egyptian Museum. For hours of operation, check the Supreme Council of Antiquities’ website here.