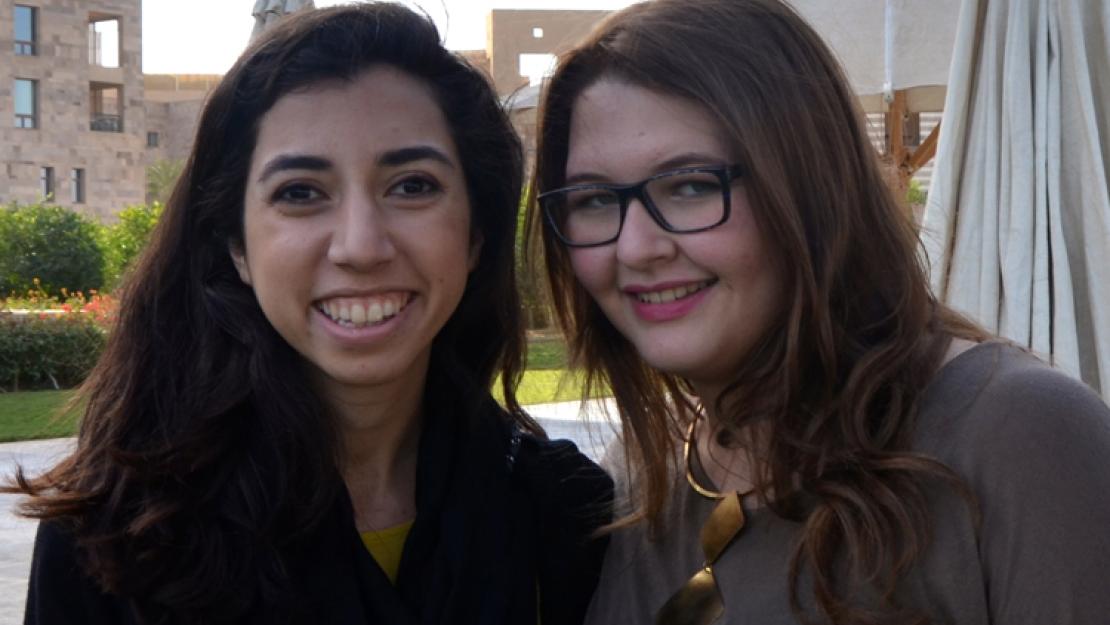 Nancy Salem and Nazly Abaza, both multimedia journalism seniors, recently won top awards at the Broadcast Education Association (BEA) Festival of Media Arts, which received more than 1,350 entries from 150 colleges and universities for its media competitions. Salem attained the highest accolade of Best of Festival in the Student Audio Competition, and Abaza won first place in the Student Audio Competition’s Specialty category. Both students will be honored at an awards ceremony to be held in Las Vegas in April.

“I did not see it coming,” said Salem, explaining her reaction when she heard she had won. “I was shocked for about a week until it finally sunk in, then I was really happy, of course.”

As a Best of Festival winner, Salem’s audio documentary, Intricate Design: The Life and Times of an Egyptian Fashion Designer, will be showcased at the Las Vegas awards ceremony. The audio documentary follows the career of Egyptian fashion designer Deana Shaaban and sheds light on the highs and lows of entrepreneurship in Egypt. “I think that I personally found the subject of entrepreneurship really interesting, especially as many of us who are graduating will be facing similar situations in our futures,” Salem explained. “It’s nice to hear an honest story of the ups and downs that everyday life includes. This documentary really shows everything that happens before success, even the moments when success isn't so certain.” Abaza’s audio documentary, 28 and Single, weaves a humorous story about arranged marriages in Egypt. “My family is really funny when it comes to this topic; we all have different opinions and points of view,” Abaza recounted. “It's just a horribly awkward and funny situation that many women in Egypt go through and one that many abroad may not fully understand, so I thought it would be an extremely relatable yet educational subject.” Abaza’s documentary received previous recognition as one of Public Radio Exchange’s best youth-made radio stories of 2013. Both students attributed their awards to the influence of classes and professors at AUC. Salem and Abaza originally produced these documentaries for an audio production class taught by Kim Fox, associate professor of practice. “It was a great class,” Salem said. “You're not producing something for a class. You're actually making a professional piece that you can be proud of.” Abaza, who is also the photo editor for the Caravan, AUC's student newspaper, explained that her University professors helped hone her journalistic and photography skills. “I have had many professors at AUC who influenced my love for photography and other art forms," she said. "Just being introduced to certain elements and having professors who are willing to help and push me further in this field was extremely valuable. For me, even with writing and editing courses, my professors have always pushed me to produce better work. For example, with this audio documentary, Professor Fox constantly gave time to give constructive criticism to the piece and always encouraged me to produce better work.” Fox, in turn, is proud of her students’ accomplishments. “It was quite a pleasure to coach both of these students to such a high achievement. To have a course that teaches students how to conceive, write and produce an audio documentary will have value well beyond their classroom experience at AUC,” she said. “To have a first place winner in the Specialty category of the Student Audio Competition and the top winner out of all the student audio entries is an enormous achievement. I've asked around the Journalism and Mass Communication Department to see if any of our students have won this competition at this level in the past and the answer was ‘no.’” Salem and Abaza hope to continue working in journalism. “In my opinion, good journalism is essential to society," Salem affirmed. "Journalists need to play that role of watchdog, and that's what initially attracted me to the field." Salem, who is also a history major, hopes to find a career that brings together her passion for journalism and history. “I'm still figuring out what to do in the future, but I'm hoping to find something that combines both my majors; I like the visuality of multimedia journalism, but I also love history research,” she said. For now, the students are preparing for the annual BEA Festival of Media Arts awards ceremony to be held on April 7. The festival is an annual competitive event for faculty members and students. The BEA is a professional association with more than 2,500 individual and institutional members interested in “teaching and research related to electronic media and multimedia enterprises,” according to the BEA website. Photo caption: Nazly Abaza (left) and Nancy Salem (right) at AUC