Jawad Anani: Is a "Terrible Beauty" Being Born in the Arab World? 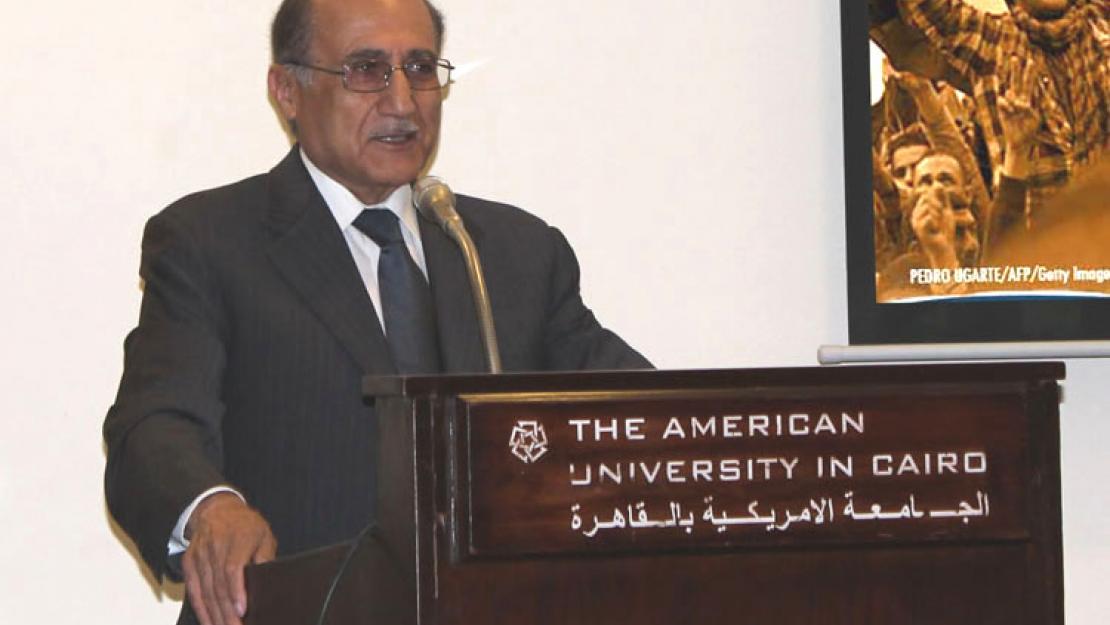 “Could these violent events, which have marred the streets of Arab cities over the last four years, be aptly called a spring? Or are they grim reminders of the abyss that we have reached, unaware of its terrifying, deep and dark realities?”

These questions were posed by AUC alumnus Jawad Anani, former deputy prime minister for economic affairs and former minister of foreign affairs and national economy in Jordan, who delivered the keynote speech at the 2013 – 2014 Graduate Student Symposium, which focused on the Middle East, Africa and South Asia.

In his speech, titled “The Arab World: Is a Terrible Beauty Being Born?” Anani opened with a reference to the W.B. Yeats poem, A Terrible Beauty is Born, and asked the audience, "Can a similar oxymoronic question be raised about the Arab world?" He argued that, at this juncture in the Arab world, a rigorous analysis of the political, economic and social state of the region must be undertaken through research. “What the Arab Spring has taught us,” he said, “is that the best of intentions can lead to hell and that what is required of us now is a well-thought-out strategy, which –– prior to being endorsed –– must be subjected to deep research and serious impact analysis.” Anani recounted the primary challenges facing the Arab world, from inefficient management of resources, a growing rate of unemployment among youth that is “at least double the national average” and an ailing public school system to environmental degradation and arbitrary housing. “Under such situations, where does a glimpse of hope come from?” he probed. Research is the key, he noted. “As young researchers,” Anani said, addressing graduate students at the symposium, “you should come to a conscientious and conscious grip of how important research is to the success of our societies. This research is not irrelevant to societal concerns and hopes. It is not biased to serve interest groups, but it is pure, objective and truth-seeking research, which aims at affording our societies the best achievable choices. Each Arab country is in desperate need of youth role models who are poised to be the agents of change.” The third annual symposium, held this year under the theme of New Directions in the Studies of the Middle East, Africa and South Asia, brought together AUC graduate students from various disciplines to discuss their research findings. The papers covered a broad range of topics including health and education, the politics of the image, cultural formations and challenges, nationalism and citizenship, migration and refugee issues, in addition to economy, labor and militarization. One paper, titled “Can Subsidies Affect the Environment? The Case of Egypt’s Energy Subsidies,” was presented by Reem Hashad and addressed the inequalities regarding subsidized petrol and gas in Egypt. “The paper gave an illustration of how these kinds of subsidies actually privilege the wealthy despite the fact that they’re aimed to alleviate the conditions of the poor,” said Sherene Seikaly, director of the Middle East Studies Center and one of the event coordinators, along with Ibrahim Awad, director of the Center for Migration and Refugee Studies, and Sawsan Mardini, director of graduate student services and fellowships. “It was a great critique of neoliberal policy, which works to cushion wealth rather than redistribute it.” Another paper, written and presented by Hana Shahin, examined “Obesity Interventions in Egypt: Mapping Resources and Highlighting Assets.” “This research,” Seikaly explained, “explained the conditions for obesity and the specifics of the Egyptian case, as well as its context within a broader regional and international context.” Sarah Kassem, another graduate student, examined the colonial constructions of Africans in the late 19th and early 20th centuries, focusing her paper on the process of “othering.” “The research examined how Africans are sometimes presented as native and primitive, how the process of ‘othering’ happened and how it was racialized and sexualized.” Highlighting the importance of the symposium as an open platform for intellectual dialogue and debate, Seikaly noted, “The idea is to bring all of these studies into conversation and bridge the disciplinary gaps, highlighting what I believe is the best thing about AUC –– its students.” Photo caption: Anani argued that a "terrible beauty" is being born in the Arab world and that research is the key to solving many of the challenges in the region