Ironwoman Alumna: 'Age is Only a Number; It's All About Passion' 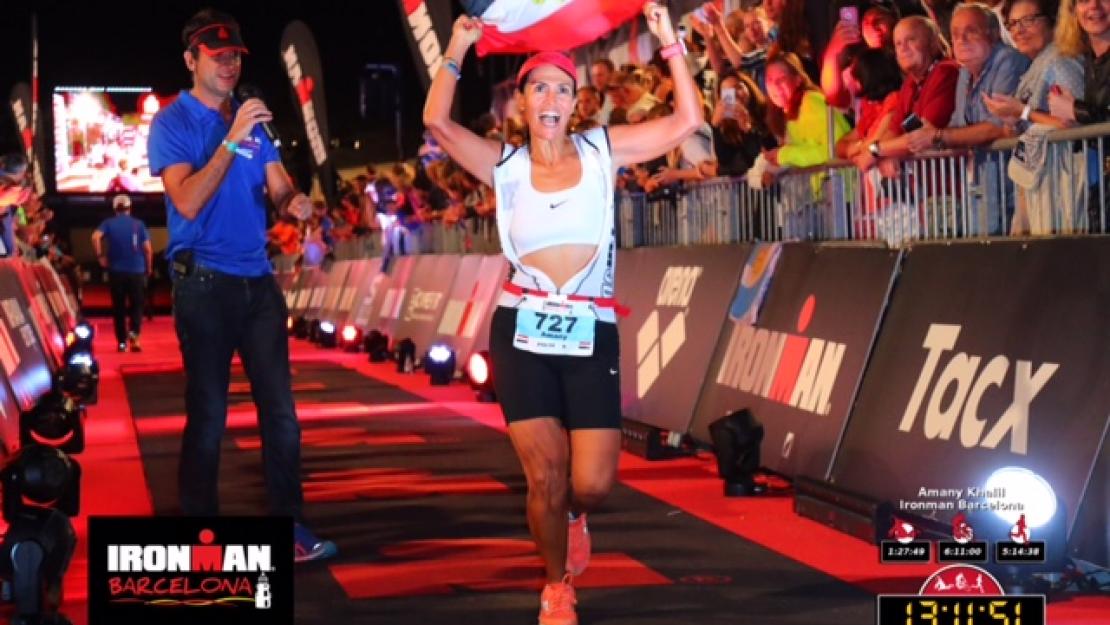 Ecstatic, blessed and proud are the words that Amany Dahawy ’90 used to describe her feelings after becoming the first Egyptian female to complete the 2016 Ironman Barcelona triathlon in the age group 50 to 54 years of age. She was named by Women of Egypt magazine among Egypt’s 50 most inspiring women of 2016.

“Becoming the first Egyptian to finish the full Ironman triathlon race is the proudest I’ve ever been of myself,” Dahawy said. “I feel I made history and, at the same time, I represented the women of Egypt. I couldn't be more grateful for this achievement and honor. It was not in my dreams at first. I was actually targeting the half Ironman triathlon, but when I got disqualified in the first trial, it made me more determined to repeat it and go for the full Ironman race in the same year — and it worked.”

The half Ironman Barcelona triathlon is considered one of the most challenging races because of its high intensity. “The race consists of 45 kilometers of continuous mountain uphill climb and downhill climb for 45 kilometers in circular loops,” Dahawy noted. “The full Ironman race was not a hilly race, but quite long. I finished the 3.8 kilometers swim in one hour and a half; the 180 kilometers cycling in six hours and 11 minutes; and the 42.2 kilometers run in five hours and 14 minutes.”

Dahawy competed in the triathlon with men and women from all over the world, who were mainly in their 20s and 30s. For the competition, Dahawy trained intensively for 10 months, six times a week, seven hours a day. “When I decided to train for the triathlon, both of my sons were in college so I had much more free time to train,” she said.

For Dahawy, sports came into her life by coincidence. “Since my family traveled abroad a lot, I had to learn how to cope with the many changes I encountered. The first change I experienced was when I had to move with my family to the United States. My parents were going for their postgraduate studies, and I was somehow introduced to basketball and fell in love with the sport. Through basketball, I made new friends and was constantly challenged by playing in different parts of the country. Additionally, it also gave me the opportunity to learn more about the American culture and people.”

After getting married to her AUC classmate, Khaled Dahawy ’90, adviser to the president, Dahawy quit her banking career and moved back to the United States. In 1998, she entered the world of running and aerobics, became a certified fitness instructor and competed in her first marathon in White Rock, Texas. Upon returning to Egypt in 1999, she continued teaching aerobics and running annual international marathons until she discovered her passion for triathlons.

In Egypt, Dahawy competed in the 2003 Luxor marathon and came in third place among the Japanese contestants. She has also participated three times in the Sahl Hasheesh Olympic Triathlon and came in first place in the 2016 women duathlon. “I love sports in general,” she stated. “I love how it boosts my morale and keeps me in good shape, but in order to maintain that, it must become part of my lifestyle. Just like many of us take medicine or vitamins daily to stay in good health, I make sure it's my regular routine of workouts daily — this is my medicine in order to maintain a good quality of life. Feeling good about myself and my fitness level encourages me to become more committed to sports.”

An ambitious athlete who doesn’t let age put her down, Dahawy is targeting to participate in the Boston Marathon in Massachusetts on April 17, in addition to taking part in the Global Biking Initiatives, a worldwide cycling community that aims to raise funds for charity in more than 20 countries. This year, the competition involves cycling from London, United Kingdom to Düsseldorf, Germany.

“I have participated in so many worldwide marathons including Madrid, Paris and Rome — just to name a few out of the 16 I have finished so far,” she noted. “However, it was the 2016 Warsaw marathon in Poland — the same year that I was training for the Ironman triathlon — that got me qualified to enter the number one marathon in the world: the Boston Marathon, which I’m currently training for.”

For Dahawy, age shouldn’t hold back people from achieving their dreams. “The message I would love to share with women my age is that age is only a number, and it's all about the passion of what you want to do and achieve in life,” she said. “At my age, making it in the news and becoming one of the top 50 most inspiring Egyptian women is the best recognition I have ever achieved.”