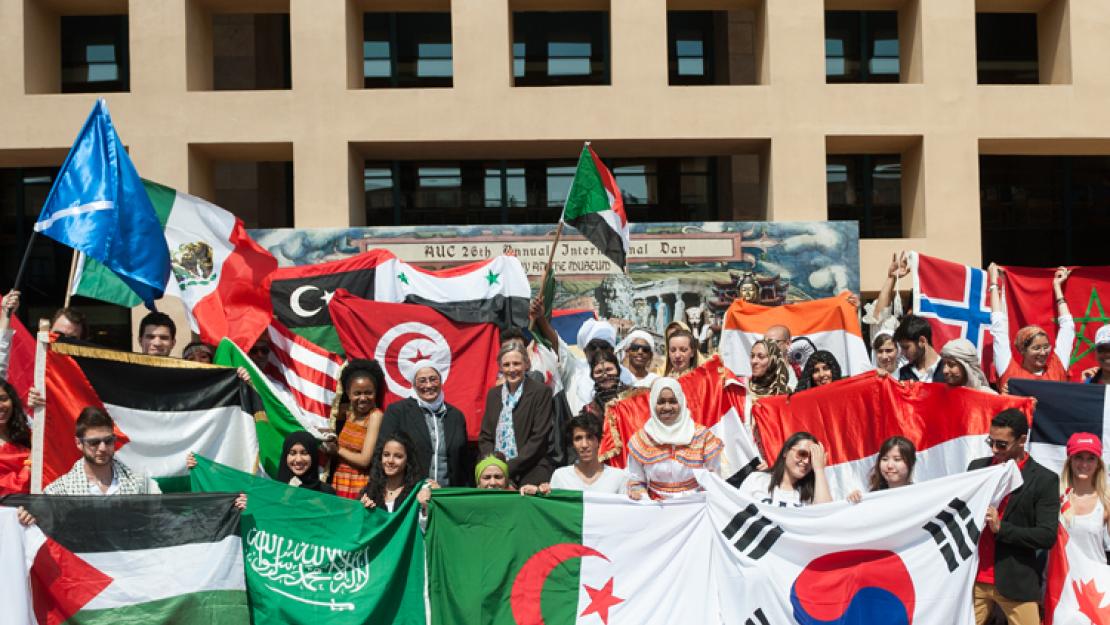 The 27th annual International Day will be held today, Tuesday, March 11, at AUC New Cairo. This year’s International Day, which will begin at 1 pm, aims to celebrate campus diversity through its timely theme, AUC World Cup. The theme was chosen in anticipation of the FIFA World Cup to be held in Brazil this June.

“We thought if we can’t go to the World Cup, we’ll have to bring the World Cup experience to AUC,” said Mohamed Galal, International Peer Leader and graduating senior. “People should expect a unique kind of experience this time around with several activities throughout the day like a soccer PlayStation tournament, a foosball tournament, and several exciting surprises and giveaways.”

International Day will include students from Brazil, Denmark, Uganda, the United States and Mexico, as well as several Middle Eastern and North African countries. The annual event also includes booths showcasing the cultures of various countries, a group photo, traditional dances and food, national costumes, tournaments and a parade featuring more than 25 countries.

Ian Borim, a Brazilian-American student at AUC’s Department of Arabic Language Instruction, is looking forward to representing the country that will be hosting the FIFA World Cup. “I’m excited to be representing Brazil with the help of my friends in the Office of International Students and Study Abroad,” Borim said. “This year, Brazil will play a central role in the International Day celebrations, as the World Cup has been chosen as the theme. The AUC community can look forward to soccer, music, art, dancing and more to celebrate and share a bit of Brazilian culture. Also, don’t miss the brigadeiro [chocolate bonbon]!” Carol Torres, a student from Mexico who is pursuing a Master of Arts in Middle East studies, is also organizing a booth in Bartlett Plaza called “¡Viva! Mexico.” “We will have real traditional Mexican tacos, burritos and aguas frescas [flavored soft drinks],” Torres said. “We are aware of the challenge that getting faithful ingredients represents on this side of the world, but we are doing our best. We will also have some crafts, souvenirs for sale and a tu foto con un sombrero [Your Picture with a Sombrero] stop.” Torres, along with graduate student Ashley Fortner-Dominguez, will also be performing a traditional dance from Veracruz, a Western port state in Mexico. Torres views the day as an opportunity to build cross-cultural connections. “I think that most of the people who decide to pick up their bags and leave their homes, we do it with the idea of learning more about the region,” she said. “We are always learning about life here, but International Day is a great opportunity for ‘life here’ to meet more about where we come from and also learn from different identities gathered in this melting-pot we call ‘University.’ Stereotypes and misconceptions operate everywhere, and sharing bits of our culture is one of the softer tools we have to engage in diplomacy and intercultural dialogue, which are of such paramount importance in our times and in the education of any professional.” Highlighting the importance of the event, Amal Salah, director of the Office of International Students and Study Abroad, said, “International Day has been held at AUC for more than 25 years. It is the only campus-wide event held by international students at AUC. With the University’s rigorous plans for internationalization, improving services presented to international students and encouraging more AUC students to study abroad, its importance takes another dimension.” Salah hopes that the AUC community will enjoy the various components of the day. “I hope the AUC community enjoys the day [because] entertainment with a cultural message about diversity and accepting the other is what we aim for,” Salah said.