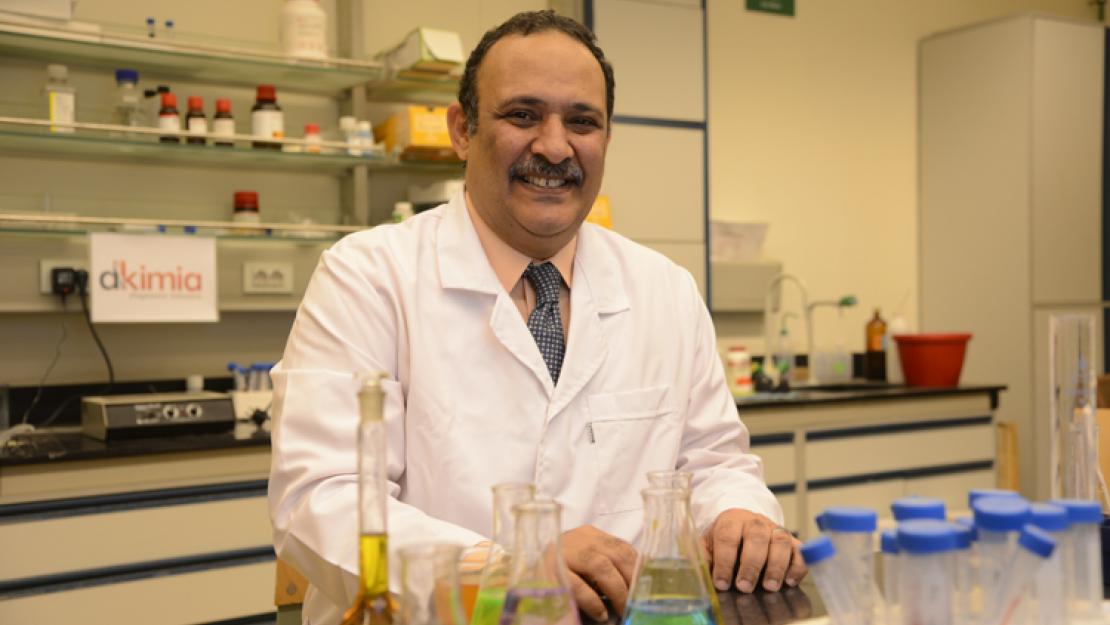 Hassan Azzazy, professor of chemistry, recently received the Global Innovator Award, presented annually by the Texas Christian University (TCU) to individuals who conduct groundbreaking research that has a significant impact on society. The innovators receive a $25,000 grant to advance work in their homecountries and are invited to the TCU campus to take part in cocurricular and multidisciplinary research.

Each year, the Global Innovator Award is given to an innovator from a different region of the globe. This year, the award focused on the Middle East and Asia. “I spent a week at TCU and gave lectures to the history department on the history of innovation in the Middle East, to political science and chemistry students, and to faculty members from the biology and chemistry departments,” said Azzazy. “When you bring innovative people from around the globe to your campus and create this type of exposure for your students and faculty, with brainstorming sessions and discussions, you give a new dimension to conventional work through the sharing of ideas on how to move to the next level. It's rewarding for both sides.”

The award also provides impetus for future collaboration, creating long-lasting linkages with international innovators and their associated universities. “This is, of course, the first step toward establishing a relationship with AUC,” affirmed Azzazy.

Leader of the Novel Diagnostics and Therapeutics research group at the Yousef Jameel Science and Technology Research Center, which has produced nine patent applications in the past four years, Azzazy has been granted the Global Innovator Award for his entire body of work, including co-founding Egypt’s first University spinoff, D-Kimia, which develops novel and affordable diagnostic solutions to detect a broad range of diseases, initially focusing on the identification of the hepatitis C virus, as well as protein biomarkers of infectious and other diseases. In addition to marketing and distributing this novel product worldwide, the company also plans to further develop its diagnostic platform to identify the nucleic acid signature of a range of viruses and genetic disease markers including tuberculosis, malaria, breast cancer and bladder cancer. These new solutions, Azzazy noted, will support national efforts to control major illnesses in Egypt such as hepatitis C and cancer, allowing the country to become competitive in the global market of in vitro diagnostics.

“We are trying to see what kinds of problems and pains are in our society, and we take these issues to the lab to develop a solution based on innovative technologies, such as biotechnology, nanotechnology or medical technology,” said Azzazy. “We work to create solutions that would be accessible in the market and can help patients.”

Azzazy’s genres of research stretch broadly, but are bound together by his commitment to innovation. In one area of his research, Azzazy and his team use nanoparticles to develop diagnostic tests for the direct detection of genomes of infectious diseases and genetic markers of cancer. “These tests are competitive and comparable to existing ones in the market,” explained Azzazy. “These methods would save lots of time, making the test much cheaper and simpler. We would not need complicated instrumentation or highly trained technicians. These tests could penetrate areas with poor infrastructure or limited resources.”

Azzazy is also focused on the development of drugs against infectious diseases, particularly hepatitis C, which infects almost 22 percent of people in Egypt –– one of the highest rates worldwide. “We are working to develop a drug that will inhibit hepatitis C virus from entering liver cells,” he noted.

Looking at the big picture, Azzazy hopes to see parallel research groups spring up around the globe. “We need to connect universities and higher education to society,” he said. “We really need to be engaged with societal problems, not only in health. There are problems with energy, food, pollution and climate change. These are global challenges, but they are also national problems. Once we develop a local solution, it will have a global impact. This is part of our global citizenship responsibility.”

Throughout his work, Azzazy remains committed to accessibility, innovation, entrepreneurship and global responsibility. “Countries are running out of resources, and the challenges are essentially the same,” he said. “Researchers need to be fully engaged in developing innovative solutions.”

Azzazy feels strongly that innovators cannot just think outside the box. “We must completely throw the box away and try to develop something that will have real impact,” he said, “but before we can solve the problem, we have to consider affordability. We cannot develop solutions that are expensive because their impact will be extremely limited. This will only come about with innovative, entrepreneurship and multidisciplinary research.”

Azzazy received his bachelor’s from Alexandria University and PhD from the University of North Texas Health Science Center. He won an extensive series of awards, including the Upjohn Research Achievement Award, National Prize in Advanced Technological Sciences from the National Academy of Scientific Research and Technology, Intel Global Challenge Prize and the Top Living Scientist Award from Al-Ahram newspaper Most recently, he received the National Prize in Laboratory Medicine and Blood Diseases as well as the Innovator Award in Biomedical Nanotechnology from Burayda Colleges in Saudi Arabia. Azzazy’s name is also featured in Who’s Who in Science and Engineering.