Galal Amin: Economic Decline Can be Traced to Corruption, Mismanagement 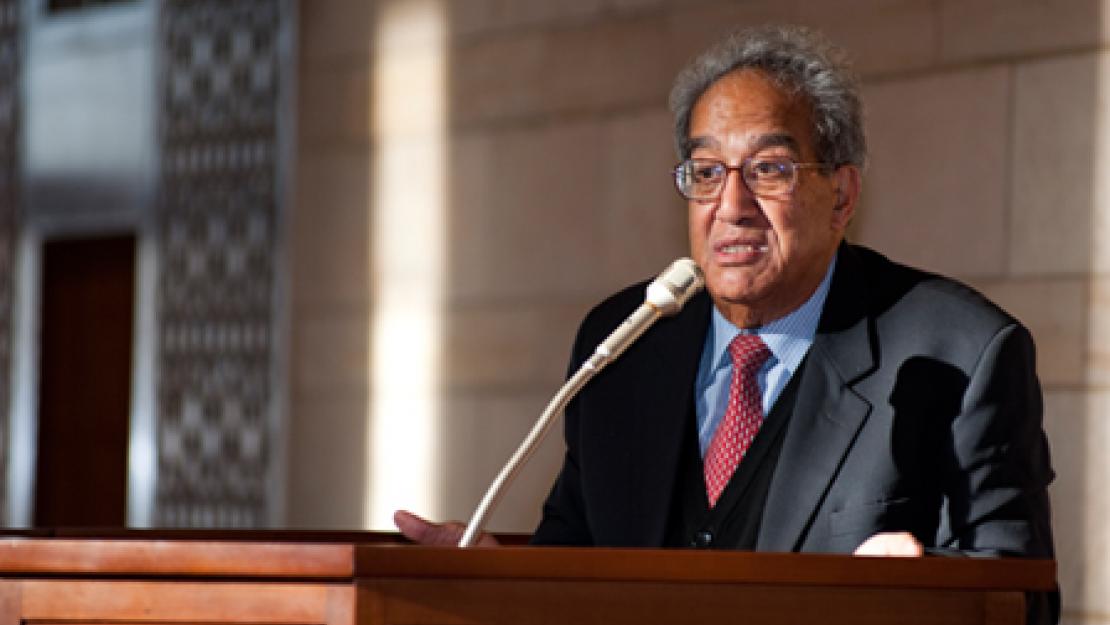 Almost three years into the January 25 Revolution, the Egyptian economy continues to decline as a result of ongoing mismanagement and corruption, argued Galal Amin, professor emeritus of economics, during a lecture this week as part of the Transforming Egypt seminar series, hosted by the School of Business.

“With regard to economic policy, you find the same old rhetoric that was used before the revolution,” Amin said. “There are no new conceptions of what should be done, only the same old conceptions. The economic situation in Egypt now is dismal, and it has been bad since the 2011 revolution. Almost all indicators show deterioration, aside from revenues from the Suez Canal and labor remittances from abroad.”

Since the January 25 Revolution, Amin noted, the unemployment rate has doubled from 7 or 8 percent to 14 percent, foreign debt has increased from $33 billion to nearly $50 billion, domestic debt has doubled to almost LE 2 trillion and the reserves of foreign currency have decreased by 50 percent, falling to $18 billion from $36 billion in 2010. “On average, growth of the GDP for the last three years has been less than growth of the population, so the standard of living has declined,” Amin indicated.

To explain how Egypt reached this point, Amin took a holistic view, not only of the last three years since the January 25 Revolution, but placed the decline in a wider historical context to explain the nation’s current economic failure, noting that unemployment has been rising steadily since the mid-1980s. “The period most comparable to the dismal situation we are in now were the years from 1967 to 1973, between the two wars,” he pointed out. “As a result of the defeat, the Suez Canal was closed. Tourists stopped coming. Investment dropped immensely, and money was directed toward reconstructing the Suez Canal cities. The oil of Sinai was lost as a result of the 1967 war. The rate of growth of the GDP declined immensely, and unemployment grew. The situation was comparable to now, except that the government then —under Nasser and Sadat — was loyal to the poor, was concerned about the underprivileged. People expected the government to care about them. I don’t think there is that feeling now.”

Amin blamed rampant corruption, economic inequality and a continuing lack of social justice for the current economic situation, noting that there was great promise after the January 25 Revolution that was squandered when power was transferred to the military council and then the Muslim Brotherhood. “Throughout history, when a successful revolution takes place, the people who make the revolution take over power,” he said. “In Egypt, the people make the revolution, but they are never allowed to participate in decision making. That is true from the time Mubarak left office in February 2011 until now. Revolutions can disrupt economic life, but that is not always the case. Revolutions could actually cause great enthusiasm. In the early days of the revolution, there was the idea of something promising, something marvelous in the economy as well as everywhere else, but it didn’t happen.”

Calling the revolution “aborted,” Amin argued that this revolutionary promise was wasted because the people in power were not interested in identifying the source of corruption and moving to curb it. “Social justice has been part of the rhetoric since the revolution, but most of the ministers in the all the cabinets after the revolution have not been particularly interested in this, with only a few exceptions,” he noted. “In order to implement social justice, you must identify the main cause of corruption or lack of justice. Nasser immediately recognized, in the first days after 1952, that the main problem was the feudal system and, in less than two months, he implemented land reform. As a result, the semi-feudal system practically disappeared. He identified the problem and removed it. The main problem now is the marriage between business and power. This has been going on from Sadat up to now. So, if you really are interested in implementing social justice, you must do what is necessary to dissolve the marriage between business and power.”

One symptom of ongoing corruption is the continuation of the subsidies system, which Amin argued has been identified as a problem by every government for the last 40 years. “When the government is so corrupt, subsidizing essential goods is the easiest way to keep the people quiet” Amin argued. “If you cancel or greatly reduce the subsidies, you have to solve the unequal income distribution.”

Amin also criticized the policy of relying on foreign loans. “Loans from abroad do not solve the economic problem; they just postpone it,” he said. “If you add up all the loans, they are less than the annual income from tourism in one good year. And on top of that, the loans have to be repaid with interest. Tourism revenue does not have to be repaid. Tourism brought to Egypt in the year before the revolution $11.5 billion. So if you just do something to repair the tourist system and corruption, you don’t need the loans.”

To cover up an unwillingness to fight corruption, encourage reasonable wealth distribution and implement creative solutions toward economic growth, politicians and policymakers rely on the rhetoric of the minimum and maximum wage as a method of enforcing income equality, according to Amin. “The idea of minimum wage is used politically; this is not the right time to talk about it,” he opined. “With this degree of unemployment, we just need to create jobs for people. If you apply the minimum wage policy, there will be inflation and the minimum wage will have no value. You have to tackle the unemployment problem first before addressing the issue of minimum wage. We need to encourage private investments and employ more people, and wages will rise. We need to fight corruption, and wages will rise.”

Amin also discussed the recent announcement that a maximum wage of 35 times the minimum wage, or LE 42,000 a month, will be imposed on public employees, arguing that imposing a maximum wage is the wrong strategy for combating the significant income disparity in Egypt. “What would be much more significant would be fighting the incomes that people are getting for doing nothing at all,” he remarked. “In all big institutions and organizations, there are people who should be eliminated. We should fight corruption, not force a maximum wage. For the last 40 years, we have been used to corruption. We find it difficult to imagine a society that is not corrupt, but we can do it. Most of us are not corrupt, just helpless.”