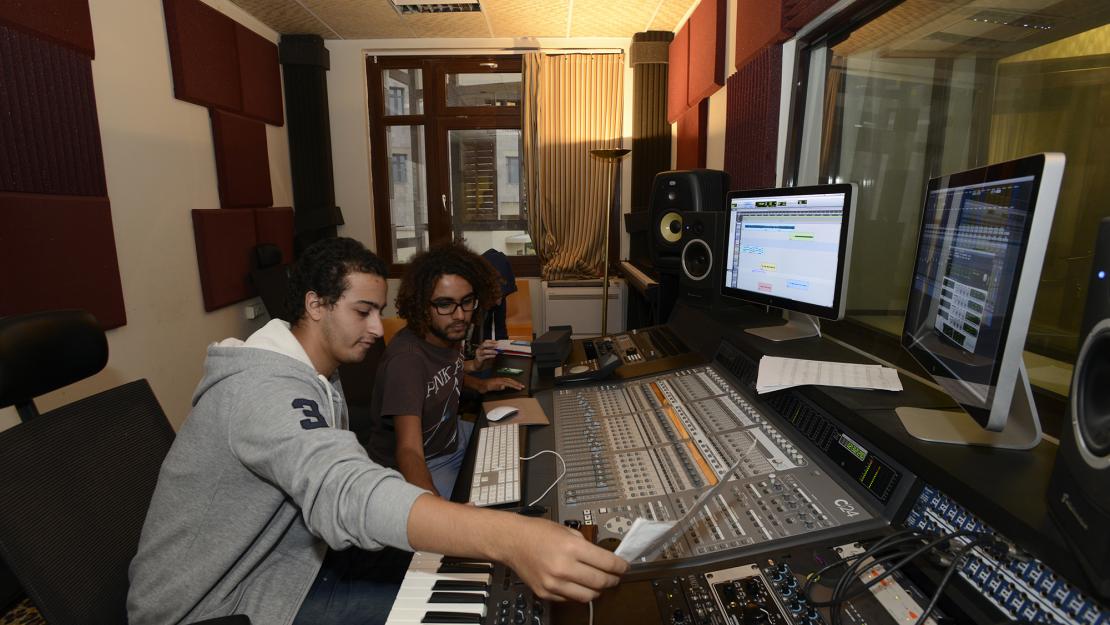 Among the student awards distributed at yesterday’s midyear commencement ceremony was the first annual Valerie Farag Music Award, presented to Mohamed Basiouny Abou Qersh '17, who has exemplified “outstanding talent in the music technology program, not only in recording and editing, but in Western and Arab music theory and performance as well,” according to Professor John Baboukis, director of the Music Program.

In memory of the late AUC professor, Valerie Farag, her husband and family created two awards in her name to be presented to a music student each semester who demonstrates outstanding musical achievements.

Mrs. Farag was born in New Jersey and developed a career as a professional musician and educator before joining AUC. At the time when Mrs. Farag joined AUC as an English teacher in 1981, a music program did not yet exist at the University. Her passion for music spurred her to begin forming musical programs on campus, namely Musical Appreciation 220, which she further developed into what is now the core of the two music programs. She was instrumental in putting together a concert program immersing students in the goings-on of the Cairo Opera House and exposing them to the sphere of Western music.  A soprano singer and pianist herself, Ms. Farag would always say that “music was her love and life," said Professor Emeritus Shawki Farag, Valerie’s husband and a professor in the accounting department at AUC. She was known for her animated love of music and her transmission of this passion to her students.

In addition to the two awards presented at each commencement ceremony, Mrs. Farag’s family is organizing an annual concert to be offered in her memory, the first of which will take place on March 23, 2017, in Oriental Hall. She cared deeply for her craft, particularly for French music, and would often hold solo voice concerts of her own at AUC Tahrir Square. The award and concert, Professor Shawi Farag explains, are meant to “keep her memory alive in a positive way,” aiming to encourage music education and student appreciation of classical music.

Nathanial Bowditch, dean of the School of Humanities and Social Sciences, was a major source of support in the process, organizing the selection committee, made up of the directors of the music performance and music technology programs as well as the chair of the Department of Arts. The committee takes into account both academic performance in the program as well as musical record and community engagement. The award itself consists of a cash gift and signifies the student will be honored at each semester’s commencement.

The award will continue to recognize students each semester who engage actively with music and personify the motto by which Valerie Farag was known: “Music alone shall live.”