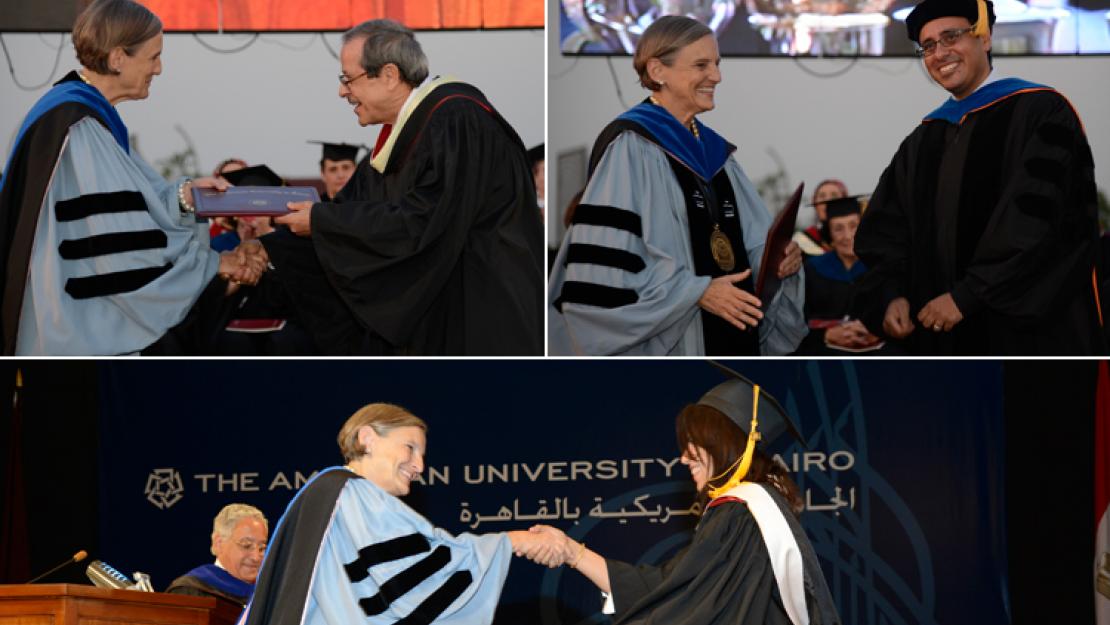 Three faculty members were honored at the commencement ceremony for their achievements in service, teaching and research.

“I was honored and pleased to hear the news that the juries for the faculty merit awards voted to award me the Excellence in Service award,” said Fahmy. “Although I was serving AUC without any anticipation for such a reward, it is always a nice feeling to know that your service is recognized and appreciated by your colleagues.

Fahmy has served the AUC community in several capacities throughout the past 25 years, including teaching as a professor in the Department of Construction and Architectural Engineering and serving as a member of the Provost's Council from 2009 to 2012, in addition to being a senate member, acting dean and dean of the School of Sciences and Engineering (SSE). Fahmy helped establish the construction engineering program and was instrumental in attaining accreditation for several SSE programs.

“Ezzat showed a unique ability to serve AUC at different levels, and he excelled in each and every task he was assigned to or volunteered to carry out,” said Ehab Abdel-Rahman, associate provost for research. “He played a significant role in leading the Department of Construction and Architectural Engineering and the School of Sciences and Engineering to excel. Through his career at AUC, Ezzat showed evidence of outstanding achievement and skill in providing leadership, outreach and extraordinary service to the University and the community.”

Fahmy, on his end, simply wanted to contribute to AUC. “My focus was to serve and help AUC, with my colleagues, in reaching its goal to be a center of excellence in the region,” he said.

Another faculty member who has contributed significantly to the University is Abdel-Meguid, recipient of the Excellence in Teaching award. Abdel-Meguid has been teaching at AUC since 2007 and was recognized by his students and peers for his engaging teaching methods. “Ahmed showed an outstanding ability to absorb students' different backgrounds when teaching, and subsequently producing a methodology that suits everyone’s needs,” said Abdel-Rahman. “He has an amazing ability to inspire, guide and mentor students through independent and creative thinking.”

For Abdel-Meguid, teaching is a reward in and of itself. “Teaching is the only faculty activity through which you could get instant feedback on your efforts,” he explained. “That ‘glow’ in the eyes of my students when they understand an issue or a topic that was perplexing just a few a minutes ago is unparalleled. Observing the perpetual effects of teaching on both the technical competencies and character of students, even after they graduate, is extremely rewarding.”

Beyond teaching and service awards, Mourad was recognized for her research endeavors with the Excellence in Research and Creative Endeavors award. “Maha’s research record is impeccable,” said Abdel-Rahman. “In just the past four years, she has produced 36 intellectual contributions in the form of peer-reviewed academic journal articles, working papers, case studies, book chapters and conference presentations. The impact of her work has been significant. Maha's award is to recognize her innovative and sustained activities in scholarly pursuits.”