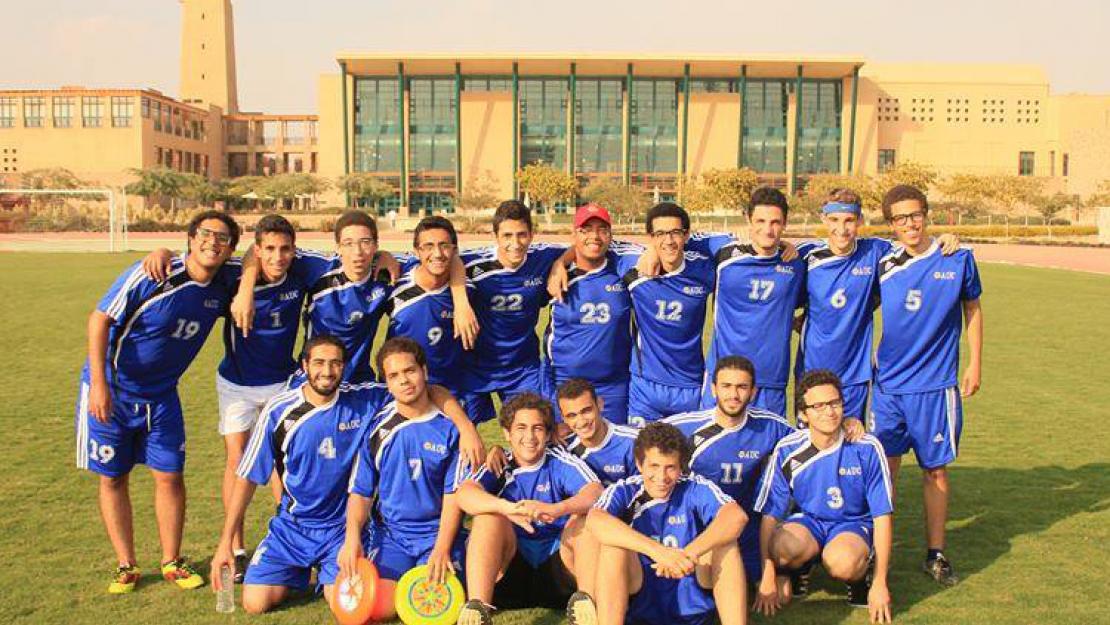 Last year, senior Ibrahim El-Sayed established an ultimate frisbee team at AUC, the first University-sponsored team for this sport in Egypt. The team, which is now made up of more than 20 members, defeated the International School of Choueifat (14 – 7) and the Gezira Youth Club (15 – 9) in matches this past weekend. But when El-Sayed first started the AUC team, called Mayhem, ultimate frisbee was a relatively unknown phenomenon in Egypt.

“Typically, when you tell someone in Egypt that you play frisbee, the first response you get is, ‘Oh that game you play with a dog,’” said El-Sayed, who first started playing ultimate frisbee in high school. But when El-Sayed began showing videos of ultimate frisbee at a booth on Bartlett Plaza to publicize the AUC team, “people saw that there were no dogs here, and it’s actual pretty hardcore,” El-Sayed said.

Ultimate frisbee is a blend of soccer and football where two teams of seven players each face off on a field and score points by catching a disc in the area of the field known as the endzone. “It’s a very unique sport,” said Hossein Shash, mechanical engineering sophomore who joined the AUC team last year. “It incorporates a lot of different sports traits like the pressure from soccer, but it also makes you think more than other sports because you have to be aware about the wind direction when you’re throwing the frisbee.”

Whereas the sport is relatively new to Egypt, ultimate frisbee teams in North America and Europe have been competing in universities and adult leagues since the 1970s. Paul DiFiore, a presidential intern at AUC, played for an ultimate frisbee team at Davidson College in North Carolina, and joined AUC’s Mayhem in Fall 2013.

“In terms of organization, ultimate frisbee in the United States has reached a really high level of organization with a governing body like USA Ultimate,” DiFiore explained. “But there’s no such body here in Egypt, so it’s all informal and there are only a couple of teams across the country. It’s really in its infancy, so AUC is breaking new ground by doing things like hosting Egypt’s first ultimate frisbee tournament.”

The team practices twice a week and holds physical conditioning trainings three times a week. “In the six months that I’ve been here, I’ve seen a huge improvement in terms of how to throw and conditioning,” said DiFiore. “We’ve taken a group of people who didn’t know anything about the sport, and now we’re a successful team.”

El-Sayed chalks up this improvement to team members’ passion and commitment for the sport. “We’ve started shifting away from showing up for fun because people have started liking the sport,” El-Sayed said. “So people started to take things more seriously in terms of practice. Everyone is putting in 100 percent effort.”

The AUC team’s latest successes were its wins against the International School of Choueifat and the Gezira Youth Club. “It was a really great feeling,” said Shash. “We were worried about the second game, but the team showed great dedication. I’m really proud of everyone.”

The team is planning to hold another tournament at AUC in the spring semester and compete with other clubs in Egypt. In the long term, team members hope to compete internationally. “Right now, we want to orchestrate more games, keep up the tradition of a tournament every semester and hold tournaments outside of Egypt," El-Sayed said. "Since we’re doing much better than predicted, games outside of Egypt are now something feasible."