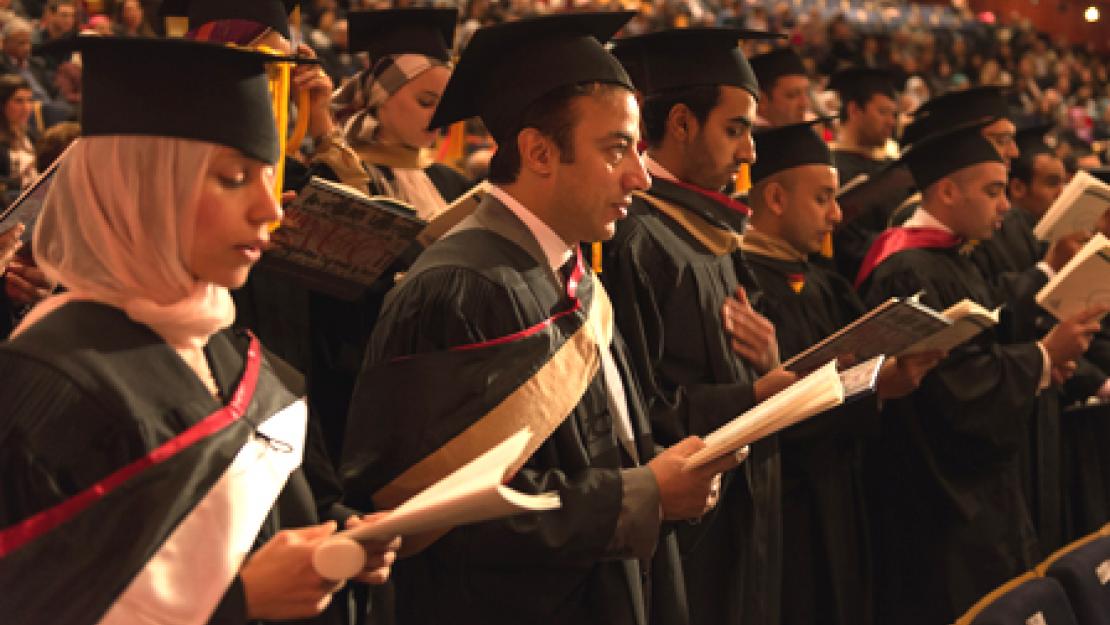 The 2014 graduate and undergraduate commencement ceremonies kicked off on a high note, marked by not only by inspirational commencement addresses, but also an institutional milestone. For the first time in the history of AUC, a doctoral degree was awarded to Yosra El Maghraby, who hold's bachelor's and master's degrees in construction engineering from AUC. El Maghraby earned a PhD in engineering from her alma mater, with a specialization in construction engineering.

"[El Maghraby's] achievement makes us proud — for her and for ourselves — as we contemplate her success, and the opportunities that she and all those who follow her will enjoy to continue AUC’s tradition of being of service to Egypt and the world," said President Lisa Anderson at the graduate commencement ceremony.

Addressing the master's degree candidates, Yousryia Sawiris, secretary-general of the Sawiris Foundation for Social Development, founder and chair of The Enhancement of Integrated Services and Waste Recycling, and AUC alumna, emphasized the lifelong importance of pursuing happiness. Sawiris, who received an honorary Doctorate of Philosophy at the ceremony, shared the seven Happiness Principles with the graduating class. “You have all enjoyed the benefits of a good education; therefore, there will be no barriers to you becoming lifelong learners," she said. "The world’s cultural heritage should also be your richest source of love of good reading, good will and good practice that guide you as successful ambassadors of Egypt."

Sawiris concluded her speech with sound advice for the graduates. “Love God, love your family, love your country and love your future work by pursuing meaningful relationships and meaningful life goals,” she emphasized.

At theundergraduate commencement, Ahmed El Alfi, founder of Sawari Ventures and Nafham (We Understand) Education, emphasized the importance of always remaining thankful. “I guarantee that once you feel the effect of an unexpected ‘thank you’ on someone, you will want to do it over and over again. And in the end, you will be the happier person for thanking them,” he said. “You can start right after you leave here by recognizing the contributions of the people around you. Thank the faculty and staff and, most importantly, I would suggest that you go up to your parents and thank them. Don’t just say thank you for everything, but think of specific things they have done to get you to this point in your life.” Also addressing the graduates, Ahmed El Raggal, representative of the undergraduate class, reminded his fellow classmates of the importance of pursuing their natural gifts, without the burden of worrying about financial or social status. “While the days passed by, as a mechanical engineering undergraduate, I discovered that within the fences of AUC, there were great minds,” he said. “Minds that were capable of making the change we have always dreamed of. Some of these minds were misplaced in other majors though, due to myths, like not finding a job or being incapable of maintaining a certain standard of living. Behind those fences, I found the great story writer, the inspirational speaker, the talented comedian, the devoted artist, the shrewd politician and the world-class sportsman who were being obliged to pursue science and business majors because of their parents’ will and because their parents believed that those majors are the ones that will grant them great success and a great future. The truth is, within those fences, I have discovered that great nations were not built by the hands of engineering and medical school graduates, with all due respect. But they were established by the hands of people who were capable of doing what they truly loved, what they were passionate about and what they truly developed themselves at, in order to stay unique and contribute to writing history.” El Raggal shared the spotlight with his fellow classmates, who were awarded for their outstanding academic work and for actively contributing to the community in a positive way. Miriam Awni, a mechanical engineering graduate, was awarded the Presidents' Cup for earning the highest grade point average, and Habiba Bakir received the Parents Association Cup. Mohamed Sanad was granted the Omar Mohsen Athletic Achievement Cup, and Karim Gad was awarded the Student Government Cup. Joining these recipients in their outstanding accomplishments were 94 undergraduates who graduated with honors, 72 with high honors and 49 with highest honors. Congratulating all graduates and awardees, President Anderson noted, “Redeem the investment we have made in you, and you will build a peaceful, prosperous, just and sustainable world."