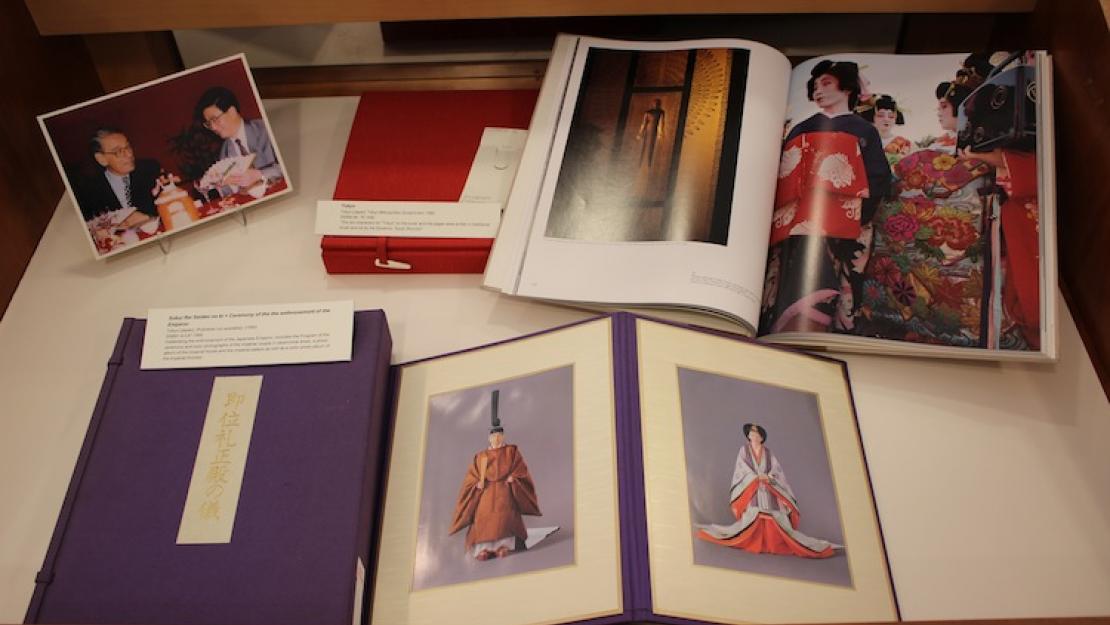 AUC's Rare Books and Special Collections Library (RBSCL) recently acquired a collection of more than 13,000 books in several languages from Boutros Boutros-Ghali, former secretary-general of the United Nations (1992 - 1997) and the first Arab and first African to hold that position. The collection provides a mosaic of Boutros-Ghali's diplomatic life, and highlights from the collection are currently on display in an exhibition at the RBSCL in AUC’s main library.

Several of the donated books are authored by Boutros-Ghali himself, who wrote in Arabic, English and French. Many of the books have unique features including stamp collections, art prints and rare signatures from prominent figures, including former U.S. first ladies Hillary Clinton and Barbara Bush. In addition to books, there are academic journals on international relations, Coptic art, and monastic life and photo albums documenting Boutros-Ghali's visits with prominent leaders.

Eman Morgan, manager of media and serials at the RBSCL and organizer of the exhibition, highlighted a series of dedication books as one of the most unique aspects of the collection. These ceremonial books bear elaborate dedications from world leaders to Boutros-Ghali. “He has been to so many countries on his diplomatic missions and trips to promote peace,” noted Morgan. A particularly striking example is an exquisite book Boutros-Ghali received from the Emperor of Japan in 1990. The case is constructed from rich, hand-made paper and includes formal portraits of the emperor and empress during their enthroning ceremony, as well as photographs of the elaborate thrones themselves.

The collection constructs a comprehensive biography of Boutros-Ghali's personal and professional life, but it also holds significant academic value. "These gift collections help contribute to the research process, not just for AUC researchers, but scholars coming from all over the world, sometimes for specific books that only we have," said Philip Croom, associate dean of the RBSC Library and Archives. "These are books you cannot buy."

The collection is contributing original documents to the RBSCL, such as agendas and minutes from Egyptian parliament meetings, that are essential tools for researchers. The donation also includes several noteworthy additions to the library's already extensive collection of maps and travel books. Securing such collections is essential to the mission of the RBSCL, and the University itself, which seeks to promote research on topics unique to Egypt and the region, Croom explained. "We have the best of both worlds: a tremendous collection of rare, old materials, and original documents of contemporary life in Egypt that have not been published, and are unique to our library," he said. "We are creating collections that will make people want to come here to do original research."

However, it is no small task to to transition personal items into carefully preserved library objects. Morgan and the RBSCL team faced unique challenges as they relocated the collection from Boutros-Ghali's home library to their new place at the University. After AUC conservationists, headed by Mohamed Abu Bakr, carefully packed each object and transferred them to the library, each item had to be unpacked, categorized and marked with the stamp created especially for the Boutros-Ghali collection. Then each object received an acid-free tag with essential information and was sent to its new home in the library, to storage, or to the conservation lab to address any physical issues.

RBSCL staff members also have the task of digitizing all the title pages, and signatures or dedications in the collection. Once digitally preserved, these rare books and dedications can be easily accessed by researchers around the globe. "There were many people across the University involved in the process," said Croom. "Lamia Eid, director of the ombuds office, was the key person in acquiring the collection, and Daad Abdel Razik, associate director of RBSCL, and Asmaa Abu Bakr, coordinator at RBSCL, were instrumental in arranging the complicated logistics of the transfer."

Croom added, "One of our mandates is to protect the things for prosperity and to make them available, make them usable. For the Boutros-Ghali's collection, AUC acts both as a place of preservation and scholarship. He [Boutros-Ghali] wanted his collection to stay in Egypt, and he wants it to be used by not just the elite, but by anyone who is eager to learn, eager to be educated. He wants to help Egypt, help young people and help make a difference in the world."

Photo caption: Among the highlights of the Boutros-Ghali donation to AUC is an exquisite book from the Emperor of Japan, including formal portraits of the emperor and empress during their enthroning ceremony