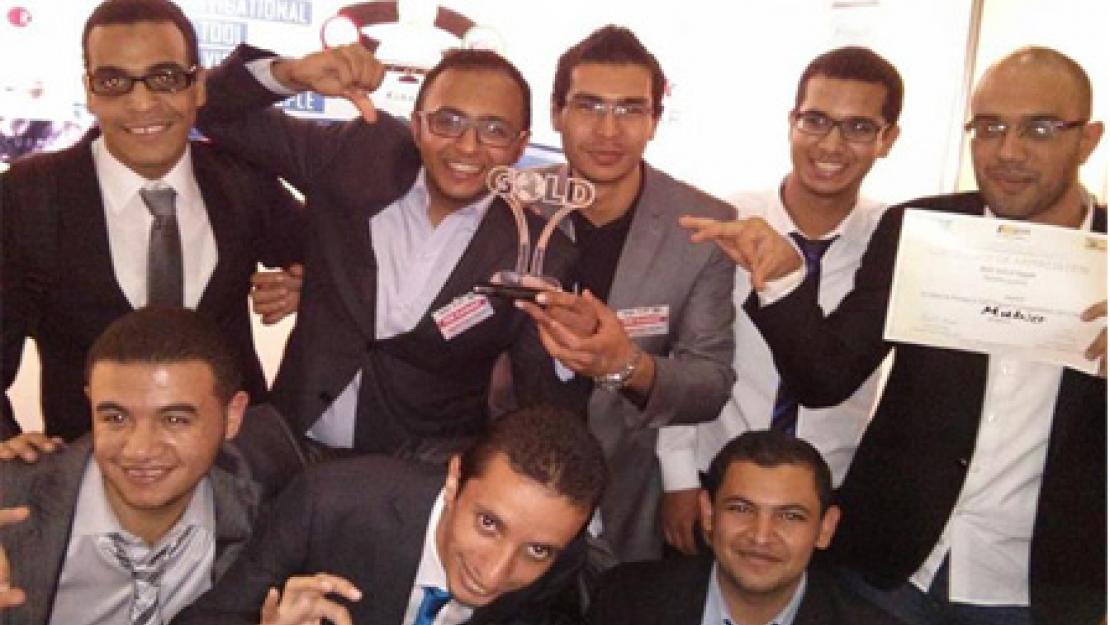 With approximately 23 million landmines buried in its deserts, Egypt is listed among the nations with the highest number of landmines worldwide. This poses a serious threat to the economic development of areas in the North Coast, Gulf of Suez and Sinai peninsula, in addition to endangering the lives of many. Over the past 25 years, more than 3,000 people have died and approximately 5,000 were injured from landmines in Egypt, according to government statistics.

Prompted to take action, Mohammad Gouda and Ahmed Hassan, who are recent graduates of Menofia University, and Swedish partner Iyad Al Khatib initiated an idea, which was developed into a commercially viable startup at the AUC Venture Lab, to build a ground-penetrating radar that can detect landmines in a risk-free way. The startup, Kashef Labs, uses an unmanned aerial surveillance tool that is light in weight and utilizes low power. Soaring at a height of one meter above rock and sand, the tool can automatically or manually screen underground surfaces through a two-stage process that includes the identification of metal objects and image construction of what is underground, matching this image with a database of all types of landmines used by the Axis forces. If the detected object is both metal and matches the dimensions of a mine in the database, it is identified as a landmine. “Egypt alone contributes 23 percent of all landmines in the world; therefore, there is a very big market need for this type of product,” said Gouda.

Kashef Labs, which recently competed in the Intel Global Challenge Competition held at the University of California, Berkeley, is one of several startups with unique ideas that are being incubated at the AUC Venture Lab. Hosted by the University’s Entrepreneurship and Innovation Program, the AUC Venture Lab develops Egypt-based startups into marketable ventures. “There are only a few well-established startup incubation labs in Egypt,” said Ayman Ismail, assistant professor and Abdul Latif Jameel Endowed Chair of Entrepreneurship at the School of Business. “The AUC Venture Lab plays a crucial role in commercializing technologies and innovations developed by Egypt-based startups and growing them into successful ventures.”

The AUC Venture Lab provides startups with mentorship and business training, access to AUC’s faculty and students, networking opportunities, and access to University facilities, to help entrepreneurs launch their startups successfully. “During the first week of the lab,” Ismail explained, “faculty members provide training sessions, and then for the rest of the cycle, faculty and mentors work collaboratively with our entrepreneurs to refine and test their business models.”

Another technology-based startup, Mubser, enables the visually impaired to navigate easily in any location using a belt with Bluetooth capabilities, which would allow them to detect objects and find their way in any environment without depending on a walking stick or guide dog. “Whenever an obstacle comes into the user’s path, the belt would notify him or her about the presence of this obstacle through vibration motors,” explained Khaled Abou Shady, co-founder of the project with four other graduate students from Menofia University’s School of Engineering.

Abou Shady and his team were driven to establish this tool when they set out to work on their graduation project and discovered that there are about 1.2 million visually impaired people in Egypt, many of whom are frustrated by inaccessibility and a lack of independence. “We found that the blind are suffering too much in Egyptian society, so we wanted to create something new and innovative to help them,” said Abou Shady.

Mubser won first place in the Information and Communications Technology track at the Idea to Product competition held in Brazil in November. It was the only team representing Egypt, competing against others from the United States, England, Ireland, Germany and Brazil. “It was very exciting to win and see our team holding the first prize,” Abou Shady said, adding that he is grateful for the support that the AUC Venture Lab has provided for Mubser. “Graduate students from the MBA program have helped us, and we have had great mentors who have proposed ideas to enhance Mubser to make it more global and more profitable.”

Four other startups are supported by the AUC Venture Lab, including Zimoro, which is working on a mobile platform for lifestyle navigation; Alkottab, a studio that specializes in creating strategic games on Facebook; El Shahbandar, which is developing web and phone applications to connect stakeholders to spinning and weaving businesses; and En2ly, which has created a management system for tracking trucks and shipments.

These startups are determined to become companies that will leave an impact in the world. “We have big plans,” Abou Shady said. “We are working with the AUC Venture Lab and mentors from different countries to put our product in the hands of people who really need it.”

AUC Venture Lab is now accepting applications from startups for its upcoming four-month cycle, which starts in February 2014. The eight to 10 teams that will be selected will receive an award of LE 20,000 and gain strategic mentorship, office space, business training and access to AUC facilities. To apply,click here.

Photo caption: The startup Mubser wins first place at the Idea to Product competition in Brazil