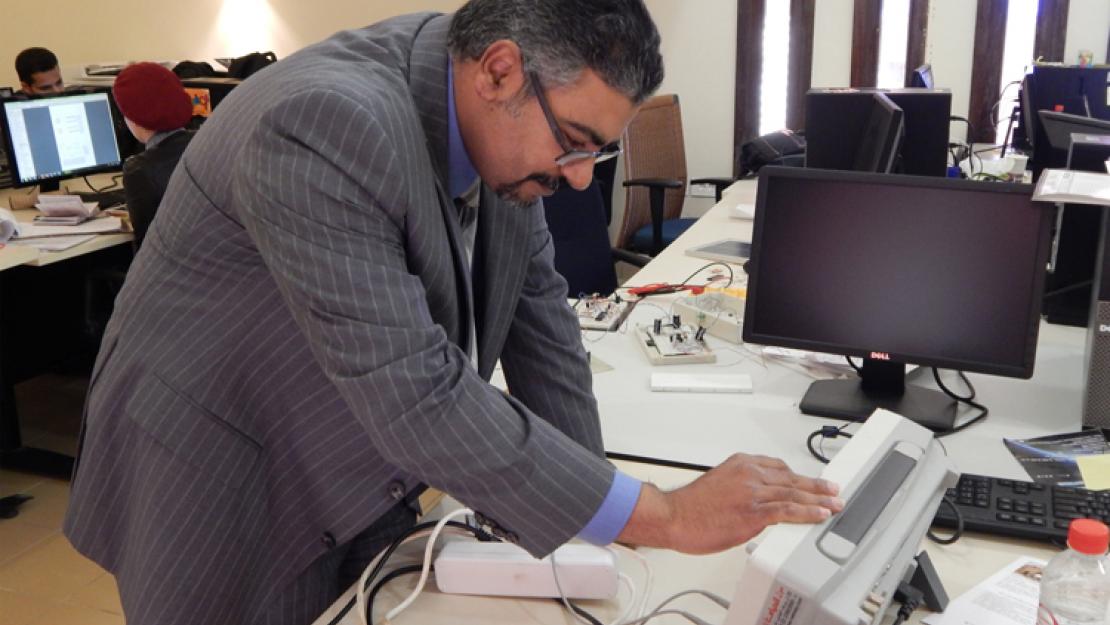 Wireless sensor networks, made up of nodes that read information and transmit data wirelessly to a central computer, have numerous potential uses, including non-invasive diabetes monitoring, home security systems and energy-saving smart homes, but their use is limited by reliance on batteries. Yehea Ismail, director of the Center for Nanoelectronics and Devices at AUC and the Zewail City of Science and Technology, leads a team working to develop a chip that would harvest solar energy in order to power wireless sensor networks.

“Imagine you want to sense how much humidity or moisture there is in a field where you are cultivating crops so that you can save water by only turning a sprinkler system on when it is needed,” explained Ismail, whose team has received a grant from the prestigious Semiconductor Research Corporation to carry out their work. “You could put small sensors through the field, which would share data then send it to a central computer that controls the sprinkler. However, you need an energy source for the sensors. Right now, most of these nodes run on batteries. When a battery goes out in one node, the entire system does not work properly. It is very time consuming to change the batteries, as there are numerous tiny nodes spread throughout the network, and the batteries that power the sensory nodes are expensive.”

Wireless sensor networks are also utilized in the design of “smart buildings,” where lights or air conditioning turn on and off depending on time of day, temperature or whether a room is inhabited. “In the case of smart homes, tiny sensory nodes are placed throughout a house to sense these changes in temperature or room occupancy,” Ismail noted. “One node will sense something and transmit it to the nearest node; the data moves from node to node through the wireless network until it reaches the central computer. If the batteries go out in one of these tiny nodes, locating it and replacing the batteries can take a lot of time.”

In order to keep wireless sensor networks functioning and expand their potential uses, researchers are turning to renewable energy sources such as sound, solar and thermal waves. “Sensory chips could be developed and placed on very small nodes to harvest solar energy, or tiny antenna could pick up sound waves,” explained Ismail. “These sources could then be converted into the electrical energy needed to run the network nodes.”

Wireless energy networks running on renewable energy could potentially be implanted into the human body in order to monitor processes at the cellular level. Ismail’s team has been tasked with developing a chip to harvest solar energy, which scientists at Khalifa University of Science, Technology and Research in Abu Dhabi will then use to develop a glucose monitoring device that could be implanted into diabetes patients. It would be minimally invasive, with tiny sensors that would be undetectable by the patient, and it could run for a lifetime without any need to change batteries. The idea behind the technology, noted Ismail, is “set it and forget it.”

Relying on renewable sources of energy would also mean using less power in wireless sensor networks, as the energy-harvesting sensors would operate based on the data the node is receiving. “Sometimes, a node may not need to send a lot of data because things are not changing very quickly,” Ismail said. “If there are low rates of data, the chip could harvest energy until it has enough to send the data. This would enable the nodes to go into sleep or standby mode easily, so that energy would not be wasted when there was not as much activity occurring that needed to be monitored. However, while the node is in standby mode, the sensory chip could still consume more power from the energy source, so that when there is new data, the node will wake up and have the power to send it.”

Explained Ismail, “To return to the example of the sprinkler system, if the nodes sense that there is enough moisture, they could go into standby mode, but even though they are on standby, they would continue harvesting solar energy for use when there is a change in activity and data needs to be sent to the central computer. They could also save this energy for nighttime, when the sun has set and there is no energy source.”

The Semiconductor Research Corporation (SRC) is a consortium of key companies in the semiconductor industry. The grant received by the Center for Nanoelectronic Devices (CND) is highly competitive and very rare as the SRC does not usually fund research outside of the United States. The CND was founded in 2012 as a joint research center between AUC and Zeweil city with the purpose of using nanotechnology to develop advanced electronic devices and microscopic sensors that can be widely used in a variety of industries, and could improve quality of life in Egypt and the Arab region.

Photo caption: Yehea Ismail leads a team that is developing a sensory chip that would harvest solar energy in order to power wireless sensor networks