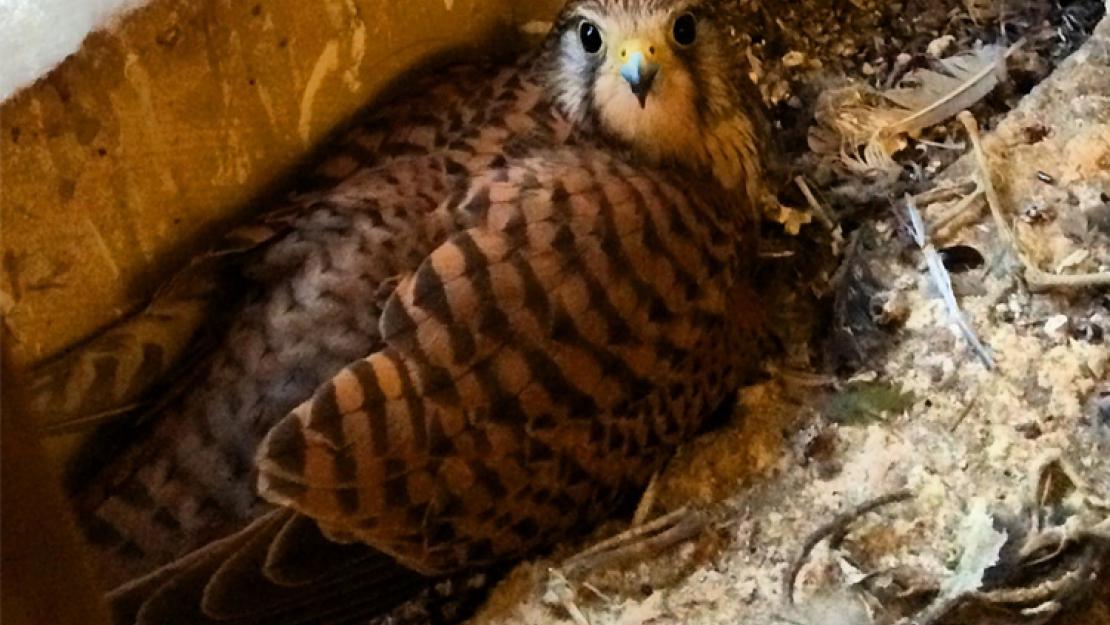 A team at AUC is observing a nest of kestrel falcons in the Administration Building at AUC New Cairo –– the first time the breeding and nesting of this bird has been studied in Africa.

The nest was discovered by Menatallah Megahed, a junior majoring in biology, and Richard Hoath, senior instructor in the rhetoric and composition department, who is one of Egypt’s leading naturalists. Megahed and Hoath are studying the birds along with Arthur Bos, assistant professor of marine biology and ecology.

“The kestrel is common to Europe and has a huge distribution, all the way to China, South East Asia and in Africa,” Bos explained. “All research so far has been done in Europe, so we think this observation could be an interesting contribution, first of all to the knowledge about the species. It will also allow us to learn how it has adapted to life in Egypt. We expect that because the environment is completely different, they feed differently –– on different prey species –– and may behave differently because the temperature is so much higher, so they might not have to sit on the nest as frequently as in Europe. This kestrel nest is a great research opportunity and could become a unique contribution to the knowledge of the birds of Egypt and to the biodiversity of the AUC campus.”

For Megahed, this is a firsthand learning experience. “I’m taking a course on animal behavior, so it’s very interesting to study the concepts and all the hypotheses that people came up with and actually see them happening before my eyes,” Megahed said. "I am interested in doing research in ecology and animal behavior, so this is field experience for me. I’m very happy I’m doing this. It is different and exciting and will help me in the future.”

The common kestrel, Falco tinnunculus, is one Egypt’s smaller birds of prey. The female is slightly larger than the male, and they bear slightly different markings, with the male typically having a grey cap and grey tail with a black tip, whereas the female is predominantly brown with black stripes and has more spots on her plumage than the male. Kestrels are solitary for most of the year, but during the breeding season, they are monogamous with one mate. The team has set up a camera to monitor the activities in the nest. There are currently five eggs, which the female sits on to incubate. The camera begins taping when it senses motion and stops during periods with no motion. Megahed views the footage daily. “We are looking at a number of different things,” noted Bos. “We want to find out what prey species they are eating here, which must be very different from Europe, where they typically feed on small mammals, usually rodents, and small birds. There is not a large rodent population here.” The male and female have so far been observed to eat lizards, which the male brings for the female while she tends to the eggs. “The communication between the male and female, the calls they give, are interesting,” Bos said. “We record the sounds that they produce. Usually, we hear the male screaming, and you see movement in the female. She goes to the entrance awaiting the meal, and he hopefully brings some food for her.” Megahed observed early on the repercussions for the male if he fails to provide food for his mate. “There was this one day when I guess the female was really hungry, and the male came in without food,” she recalled. “She kept screaming in his face –– screaming at the top of her lungs –– I guess she was screaming at him, ‘Where have you been? I’m hungry!’ and then she left, maybe to hunt something eat. When she came back, she sat on the eggs for a little while, then the male came back in with food. I think he didn’t leave more than two hours without coming back with food. He learned his lesson.” In addition to making note of the relationship between the male and female, the team hopes to identify larger trends in the behavior of the birds through different stages of the reproductive process, from waiting for the eggs to hatch to caring for the new babies until it is time for them to leave the nest. When they began their observation on April 10, there were two eggs in the nest. “We want to know if the behavior is changing over the period of time, so when she has one egg, is it different from now when she has five?” Bos mused. “Toward the hatching, is she changing? Is she sitting on the eggs for longer periods over the day? We have to look at the images. For each period of time that she is doing something, we are trying to estimate what the behavior is.” According to previous research, the normal incubation period for kestrel falcons is 27 to 29 days, followed by 27 to 32 days when the fledglings remain in the nest under the care of their parents. However, the incubation period could be shorter because the temperature in Egypt is much higher than in Europe, where the four-week incubation period has been observed. “Right now, I’m seeing the female is mostly incubating the eggs (physically sitting on them), and she is very fussy in the nest. She’s always organizing everything,” Megahed noted. Megahed, Bos and Hoath do not interfere in any way with the kestrels in order to observe their natural behavior. “I'm observing directly everything I am learning in class –– how most birds are monogamous and stay with their mates, how the male is helping the female with incubation and taking care of her during the breeding season, and how there is a difference in the pattern of the wings between males and females. Bos is hopeful that the kestrels will continue to nest in the Administration Building in coming seasons. The birds typically breed in the spring. “What we are doing now is only one observation of one pair, so you are not sure how representative these are for the population in Egypt,” he explained. “Usually, they come back the next year to the same location, so it would be great to set something up for next year because then we will have a second observation for comparison. This would be a very interesting study.” Photo caption: The mother kestrel falcon protecting her nest at AUC