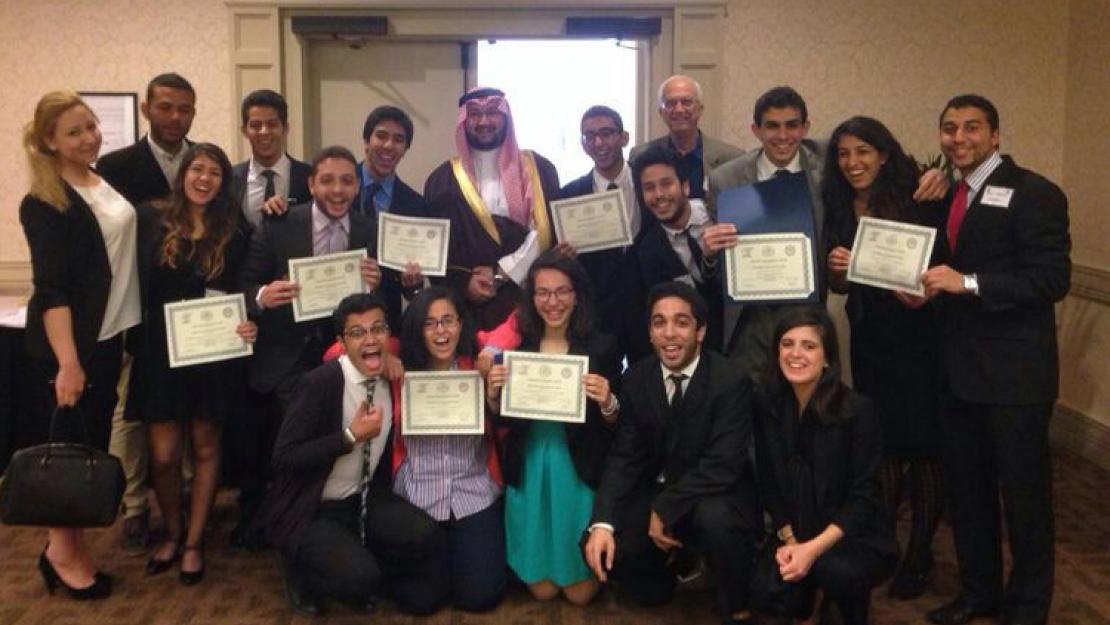 “This is the first time the conference gave the Special Commendation, so we were so surprised when they announced it,” recalled Maha Abdel Azim, a junior majoring in political science and economics who serves as the secretary-general of AUC’s Model Arab League. “There were 22 universities in the conference, and usually they only give awards for Outstanding or Honorable Mention. This year, they said they felt like there were more than three teams that deserved to be recognized, so they gave the Special Commendation to us.”

Facing off against more than 300 students from 21 other universities in the United States and Canada, AUC team members split into pairs to attend different councils. AUC delegations were chosen by their peers as the Outstanding Delegation in the Joint Defense Council and the Palestinian Affairs Council, and received Honorable Mention in the Political Affairs, Human Rights, Head of State and Environmental Affairs councils.

“The awards within each council are based on the other delegations voting for you,” explained Abdel Azim, who was awarded Outstanding Delegation with her teammate on the Joint Defense Council. “It’s great to receive the special commendation, as well as so many council awards, because it means we succeeded on both levels. The professors and advisers chose us for the special commendation, and our peers felt that we deserved council awards. It was really rewarding because most of the other universities were from the United States and had discussed similar topics in the regional competitions, so they came to the conference with their ideas prepared. It means a lot that we were able to come up with ideas on the spot and win over the other participants, since we went straight to the national level without competing in the regionals, since we're from outside the United States.”

Walid Kazziha, professor of political science and faculty adviser for the AUC Model Arab League, emphasized the tenacity and skill of AUC students. “As a team, they worked like a clock; they were so well-synchronized and well-trained,” affirmed Kazziha. “I’ve been with them on several occasions over the last five years as a chaperone, and this year they surprised me. In previous years, they have done well, but not as well as this year. It was delightful to see them making such progress.”

On each council, delegates tried to come up with the most creative ideas in line with the foreign policy of the country they were representing. “In the Joint Defense Council, the topics were how sectarian tensions could become a threat to regional security, and domestic conflict becoming internationalized,” said Abdel Azim. “Morocco’s proposal focused on border control, so that we would prevent arms traffic into countries with sectarian violence. We called for a collaborative effort to share technology and ideas to keep arms from being smuggled across borders and making sectarian conflict worse.”

As in real-world diplomacy, there were two components for success at the conference –– formal debate and lobbying. Students had to defend their proposals through speeches before their councils, but it was just as important to persuade their peers to support them through interacting in a casual setting, outside of the sessions. “I learned a lot because the national model is a condensed setting of all the skills you need in diplomacy,” affirmed Abdel Azim. “You need to walk up to a complete stranger and convince them to sign on to this idea that you also just thought of, because we decide on topics the same day. You learn persuasion and debating skills because people may argue against your resolution and you have to defend it in a way that doesn’t discourage anyone else from supporting it. People have different policies, so you have to argue in a different way for each person, depending on their policy. You have to balance between getting people to like you and being dominant on the council.”

To prepare for the conference, the students attended lectures about Morocco and the larger Arab world, and trained in procedural techniques, such as how to make proposals. The delegates also wrote position papers about a variety of topics and met with MAL alumni for tips about what to expect. “The students don’t only train in terms of academic information, but they learn how to conduct themselves and manage meetings, how to make coalitions and alliances, and how to maneuver politically,” Kazziha said. “They develop both academic and administrative skills, and cultivate the ability to think independently. They also take action as a group because they must be synchronized in order to succeed.”

While the Model Arab League was originally created by the Political Science Association, MAL members come from different schools and backgrounds, Kazziha noted. “They are not just political science students," he said. "There are students from business, the sciences, global affairs and public policy. The wide spectrum of students involved in the activity enriches it.”