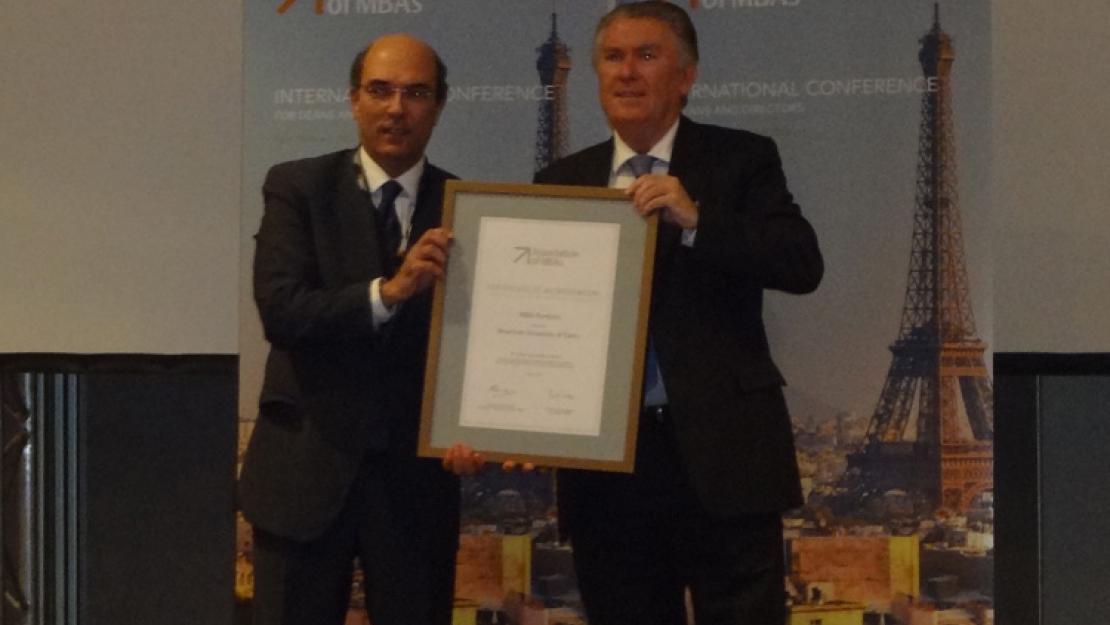 AUC’s School of Business has recently received accreditation for its MBA and Executive MBA programs by the London-based Association of MBAs (AMBA). Only 2 percent of MBA programs worldwide are AMBA-accredited.

“This recognition is a stamp of quality –– for the faculty, the students and the program, which has been in operation for 32 years, has one of the highest admission criteria regionally and has produced some of Egypt’s leading executives, CEOs and experts in different fields and sectors,” said Sherif Kamel, dean of the School of Business. “The AMBA accreditation will help attract students from outside Egypt to study at AUC, and it reaffirms our commitment to academic excellence and our position as a global leader of business education.”

Echoing the same sentiment, Ahmed Abdel-Meguid, associate professor and chair of the Department of Accounting and director of the MBA programs at the University, noted, “Being AMBA-accredited testifies to the quality and rigor of our MBA programs. With this accreditation, we join a very elite group of business schools worldwide. We have evolved from a regional leader to an international contender. The AMBA accreditation would be used as the primary framework for the continuous improvement of our MBA programs.”

While the MBA program at AUC is more than three decades old, significant improvements have been made recently, according to Kamel. Case studies and study tours are becoming a core part of the learning experience, students are increasingly participating in global competitions, and course content is regularly updated and revisited to reflect changing market dynamics. The MBA Debate series was also introduced in 2010, bringing students together with business and academic experts and scholars to discuss contemporary issues in the field. “Over the last few years, there has been increasing input from faculty, alumni, industry professionals and businesses as part of the continuous improvement efforts in the program,” said Kamel.

The School of Business has also launched itsExecutive MBA program in Spring 2013, filling a niche in the market for experienced professionals, executives and directors.

The AMBA accreditation is part of a series of successes for AUC’s MBA program, which have achieved high ratings from a number of international institutions and publications. According to Forbes Middle East, AUC has thetop MBA program in the region, ranking first in 2012 among similar programs in 37 private universities in the Arab world. The MBA program at AUC was also among three graduate programs at the School of Business –– including the Master of Arts in economics and Master of Arts in economics in international development –– that have been rankednumber one in Africa, according to the 2013 - 2014 Eduniversal ranking of top master’s programs. In 2012 - 2013, the QS Global 200 Business Schools Report, which rates business schools in different countries according to employer opinions, ranked AUC’s MBA program among thetop 200 MBAs worldwide, along with prominent universities such as Harvard, Stanford, Kellogg, INSEAD and the London Business School. In addition to these recognitions, most recently, a team of four MBA students from AUC wonfifth place worldwideat the Aspen Institute’s 2014 Business and Society International MBA Case Competition in New York, which included 25 teams from around the world and more than 1,000 MBA students hailing from prominent institutions such as Northwestern University, the University of London, Wilfrid Laurier University and Boston University. This is not the first time that the School of Business receives top international accreditation. Since 2006, the school has been accredited by the Association to Advance Collegiate Schools of Business International, making it one of only 5 percent of all business schools in the world to receive such accreditation. The school’s executive education programs are also accredited by the Accrediting Council for Continuing Education and Training. Referring to the school's continuous improvement efforts, Kamel noted, “The School of Business is extremely ambitious, and our goal –– since the school’s establishment in 2010 –– is to claim a rank among the world’s top 100 schools by 2019. It’s a journey, not a destination, and we are surely getting there.” Photo caption: Dean Sherif Kamel at the 2014 AMBA International Conference for Deans and Directors, which was held in Paris this month and where AUC’s MBA program was declared among the 2 percent worldwide that are AMBA-accredited