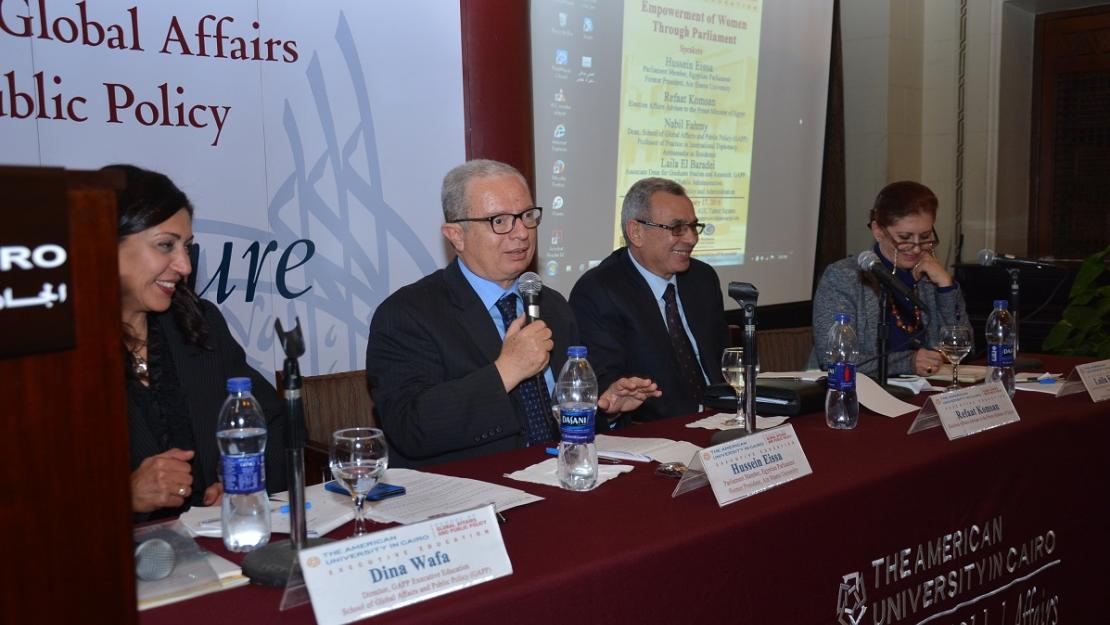 The Empowerment of Women Through Parliament Program trained 20 women parliamentarians

Women hold more seats in Egypt’s current parliament than ever before in the country’s history. With 89 female representatives holding 14.9 percent of the seats available, these women parliamentarians are part of a new generation of female leaders in Egyptian politics.

With this in mind, the newly launched Empowerment of Women Through Parliament program (EWPA) aims to empower female parliamentarians in decision-making processes to advance the status of Egyptian women. A collaborative effort by the School of Global Affairs and Public Policy (GAPP) Executive Education and the Kamal Adham Center for Television and Digital Journalism, 20 women parliamentarians were trained in the program's first round.

“Through GAPP Executive Education, we offer programs to transform public services,” said Dina Wafa, director of GAPP Executive Education and adjunct assistant professor of management. “Working on gender issues is part of our objectives. It has been proven scientifically that empowering women increases growth dramatically. It is important to find ways to empower women because it is normal to find women working twice as hard as men but not necessarily gaining results.”

In partnership with Global Partners Governance Practice and the Danish Egyptian Dialogue Institute, the program included a workshop for the parliamentarians over two training days in February. The first part of the program, provided by GAPP Executive Education, included two modules focused on capacity building for public speaking and gender mainstreaming for members of parliament and staff members. In the first module, members of parliament were trained on public speaking and on the art of communication in parliament and the media, while the second module was dedicated to capacity building to integrate gender in public policies and legislation.

Wafa noted the parliamentarians' impressive commitment to learning. “We had independent parliamentarians and others affiliated to political parties who dedicated themselves in the weekend for the training,” she explained. “Some were coming from different governorates, so they had to stay in Cairo during the weekend to participate in the workshop.”

The Kamal Adham Center for Television and Digital Journalism also held a one-day workshop on techniques for conducting a successful television interview. This workshop aimed to show parliamentarians how the way they deliver their messages is as important as the content of the message.

At the workshop, the group recorded a simulation of a talk show in the Kamal Adham center’s studios with two Egyptian television hosts, Mona Salman and Mohamed Said Mahfouz. After recording their talk-show simulations, members of parliament received feedback and reviews on how they implemented the acquired techniques in their debates. The parliamentarians also had an intensive session on developing their debate strategies and voice coaching skills by professional development trainer Maha Shahbah.

Initiatives like EWPA underscore the University's commitment to service, noted Dina Saad, assistant director for professional development at the Kamal Adham Center for Television and Digital Journalism. “We are proud that we had a role in developing the talents of these parliamentarians because, in the end, AUC is an educational institute that provides valuable educational services to society,” said Saad.