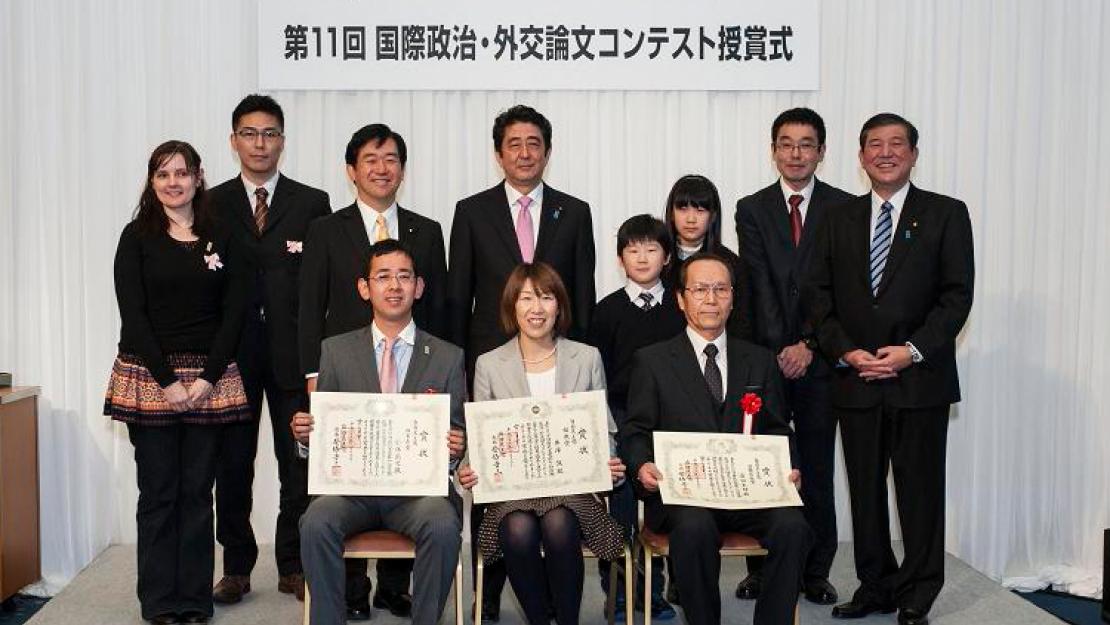 Takeshi Kobayashi, an international relations graduate student at AUC, recently accepted an award from Japanese Prime Minister Shinzo Abe for an essay he submitted in a nationwide competition on how to best prepare Japan for the 2020 Summer Olympics, which will be hosted in Tokyo.

The annual competition, which has been taking place across Japan for the last 10 years and is run by the ruling Liberal Democratic Party, sets a theme for the submissions every year. Kobayashi saw the Olympics theme as a chance for him to highlight the importance of “internationalizing” his country further. “In the essay, I mainly discussed how to attract more foreign investment to Japan and increase the country’s openness to globalization in the form of international students, businessmen and tourists. This could be done through a special committee that would process visas, manage foreign investments and promote study-abroad opportunities for foreign students. Right now, the foreign affairs, economy, industry and education ministries handle all these issues separately, when it would be much more efficient for a specialized office to handle them directly, especially before the Olympics.”

Similar reforms have been suggested in Japan over the years, but are consistently rejected by various lobbies with vested interests. “These groups are against opening the Japanese economy to outside competition because they are fearful that they would not be able to contend with imports from overseas,” he explained. “So in my paper, I suggested using the buildup to the Olympics to really push for these reforms through different avenues.”

Kobayashi was happy –– and surprised –– to be recognized. “I attended the awards ceremony, which was actually a big conference for the ruling party,” he said excitedly. “Their members had gathered in Tokyo from all over Japan, and the prime minister, along with other high-ranking officials, also attended and gave us our certificates. I was awarded second place, which is great because I didn’t expect that I would receive an award at all!”

Kobayashi’s passion for international politics, specifically as it pertains to the Middle East, is what drove him to come to AUC. “I have been very interested in Middle Eastern politics since I was an undergraduate student in Tokyo,” he noted. “After my graduation, I worked in trade and commerce for almost eight years, but following the January 25 Revolution in Egypt, I always wondered to myself if I should be in Tokyo watching the events happening in Cairo and the rest of the Middle East on TV, or if I should be there experiencing them firsthand.”

That is when Kobayashi made the decision to come to Cairo to pursue his master’s in international relations at AUC. Driven by a desire to change his career path and the fear that he may miss out on an opportunity to experience the region-wide political transitions, Kobayashi enrolled at the University in Spring 2013. “The University has a strong program in Middle East studies, and I love being here at this time of change in Egypt –– watching events as they unfold.”

Kobayashi added, “I will graduate in 2015 ‘inshaa Allah,’” he said smiling, “and before I go back to Japan, I’m planning on getting some work experience in the Middle East. I’d like to apply my skills as a student and professional to advance the future of Japan’s foreign policy and enhance relations between the Middle East and Asian regions.”

As for the annual contest run by the Liberal Democratic Party in Japan, Kobayashi intends to compete again next year. “The topic will be about international politics and the foreign policy of Japan, so that overlaps with my major,” he said, “I’m going to take the challenge and aim for first place.”