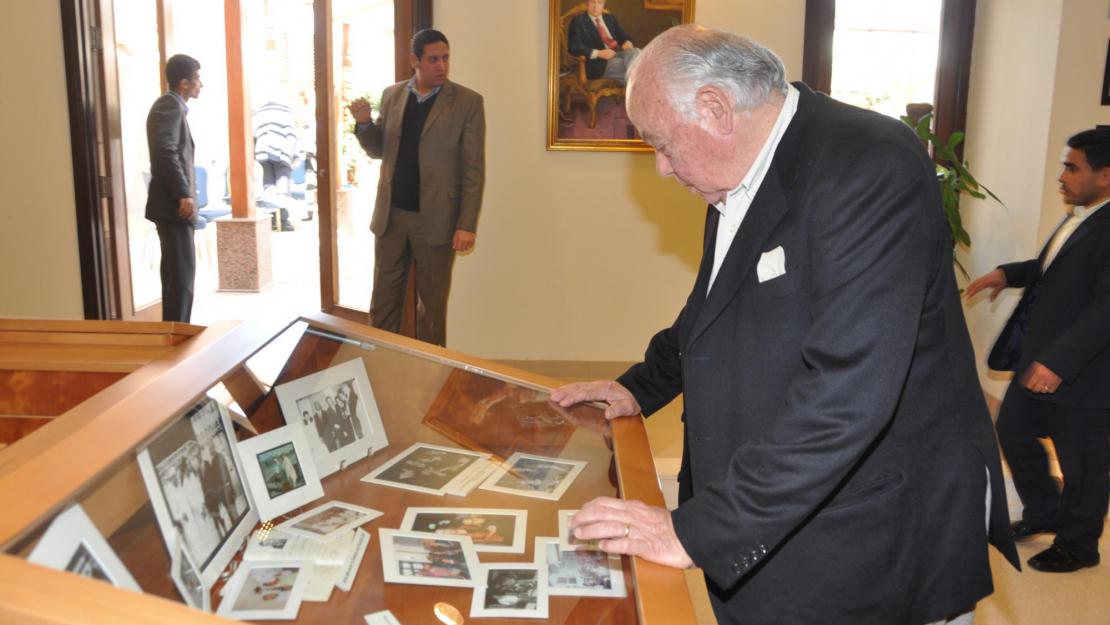 The Rare Books and Special Collections Library (RBSCL) at AUC has recently received 12,000 volumes of books donated by the family of the late Egyptian writer and philosopher Anis Mansour.

“We chose to donate Anis Mansour’s precious collection to AUC because we know of the University’s professional expertise and state-of-the-art facilities that will conserve and preserve this wealth of knowledge,” said Mona Ragab, Mansour’s stepdaughter.

In addition to the books, the donation also comprises other belongings of Mansour including manuscripts, serials, art exhibition catalogs, personal invitations, short stories, photographs, paintings, parliamentary and Shura Council documents, news clippings and a number of unpublished papers, as well as his office furniture. The sizeable collection is currently being processed and entered into the AUC Library’s catalog.

“Anis Mansour is an influential journalist whose ideas reflected local thought and helped Egyptians think and transition during the various periods in which he lived,” said Philip Croom, associate dean of the Rare Books and Special Collections Library. “This priceless collection is really a valuable statement of his life and experiences, and is very much a piece of Egyptian history too, as it reflects an important era in Egypt’s past.”

Among the thousands of short stories, bibliographies, signed publications and plays, as well as history and poetry books, there are notable works such as Nasser and His Generation (1978) by Panayiotis J. Vatikiotis and The Suez Expedition (1956) by André Beaufre. Each piece of the collection has been carefully stamped so that they can be easily recognized as belonging to Mansour’s collection and the legacy he created. “Most of the books from his personal library are dedicated by prominent figures such as President of the Maldives Maumoon Abdul Gayoom, former Minister of Antiquities Affairs Zahi Hawas, famous Egyptian novelists including Ehsan Abdel Kodous, Tharwat Abaza and Alaa EI Aswani, and media figures like Amr EI-Leithy,” said Croom. He added, “Anis Mansour was a friend and confidante of President Sadat, and he participated in the discussions on the treaty with Israel. Anis Mansour was also involved with many influential people and wrote a daily column for 15 years.” The column, called “Mawaqef” (Situations), was initially published in Akhbar Al-Youm in 1961 and continued being published in Al-Ahram after he started working there in 1976.

During his lifetime, Mansour was editor-in-chief of many notable Egyptian magazines, among them Al-Geel (The Generation), Hiya (She), Akher Saa (The Final Hour) and October. He was also an avid writer, successfully publishing 177 books, 15 comedic sketches and 12 television series. His writings were public and personal successes, and garnered him a number of awards, including the State Incentive Award for Travel and Literature in 1963 and the Mubarak Award for Literature in 2001. AUC hosted a special event hosted to commemorate Mansour’s legacy and lasting contributions to literature, philosophy and media. At the event, which was attended by Mansour’s family, close relatives and friends, President Lisa Anderson noted, “We are all here to celebrate the donation of one of the most important and influential writers of his generation,” she said, applauding the hard work that the skilled team at AUC’s conservation department put into preserving the collection. “If you look from a distance, Anis Mansour was the self-conscious window on the world to Egyptians. He also brought Egypt to the world in the same way.”