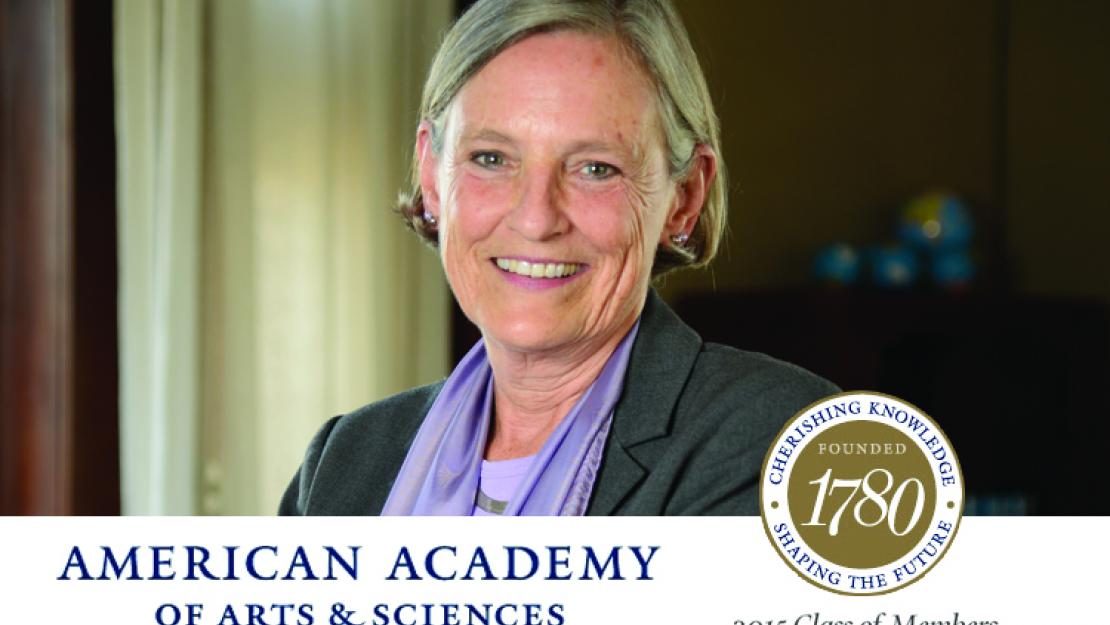 AUC President Lisa Anderson has been elected among the 2015 members of the American Academy of Arts and Sciences, alongside Nobel laureates; Pulitzer Prize winners; MacArthur and Guggenheim fellowships; Grammy, Emmy, Oscar, and Tony awards; as well as some of the world's most accomplished leaders from academia, business, public affairs, the humanities and the arts.

The American Academy is one of the most esteemed honorary societies in the Unites States and a leading center for independent policy research. Members contribute to academy publications and studies of science and technology policy, global security and international affairs, social policy and American institutions, and the humanities, arts, and education. The new class will be inducted at a ceremony on October 10, 2015, in Cambridge, Massachusetts.

“We are honored to elect a new class of extraordinary women and men to join our distinguished membership,” said Don Randel, chair of the academy’s Board of Directors. “Each new member is a leader in his or her field and has made a distinct contribution to the nation and the world. We look forward to engaging them in the intellectual life of this vibrant institution.”

Academy President Jonathan Fanton added, “The honor of election is also a call to service. Through its projects, publications and events, the academy provides its members with opportunities to discover common interests and find common ground. We invite every new member to participate in our important and rewarding work.”

Mathematicians and scientists in the 2015 class include:
•    Sanjeev Arora, theoretical computer scientist who developed the PCP Theorem
•    Gerard Ben Arous, leading probabilist
•    James W. Curran, epidemiologist AND dean of the Rollins School of Public Health
•    Michael Elowitz, whose work helped to initiate synthetic biology
•    Howard Eichenbaum, director of the Center for Memory and Brain
•    George Georgiou, inventor of protein drugs and protein production technologies
•    Linda Hsieh-Wilson, a pioneer in the new field of chemical glycobiology
•    Victoria Kaspi, a leader in high-energy astrophysics
•    Margaret Livingstone, neurobiologist
•    Paul A. Offit, virologist
•    Paul L. McEuen, nanoscale scientist
•    Philip Needleman, who discovered and developed Celebrex ®
•    Rebecca Richards-Kortum, whose works focuses on developing low-cost, high-performance imaging technologies for low-resource settings
•    Alejandro Sánchez Alvarado, a leader in the study of regeneration
•    Joan B. Silk, evolutionary biologist
•    Gerhard Wagner, who performed the first comprehensive study of hydrogen exchange on a protein
Social scientists in the new class include:
•    Sarah A. Binder, an expert on Congress and legislative politics
•    Peter T. Ellison, anthropologist who laid the conceptual and empirical foundations of human reproductive ecology
•    David W. Garland, a leading sociologist of crime and punishment
•    Matthew Gentzkow, economist whose research focuses on media industries
•    Kenji Hakuta, an expert in language development and bilingualism
•    Nina G. Jablonski, anthropologist who studies the adaptation of primates and is the developer of the Diffusion Model of judgment
•    Roger Ratcliff, psychologist
•    Jenny Saffran, who studies how infants learn
•    Paul Slovic, leader in the psychology of risk analysis and assessment
•    David S. Tatel, judge
•    Robin West, known for her work in the ethics of care and feminist legal theory

Since its founding in 1780, the academy has elected leading “thinkers and doers” from each generation, including George Washington and Benjamin Franklin in the 18th century, Daniel Webster and Ralph Waldo Emerson in the 19th, and Margaret Mead and Martin Luther King, Jr. in the 20th. The current membership includes more than 250 Nobel laureates and more than 60 Pulitzer Prize winners.