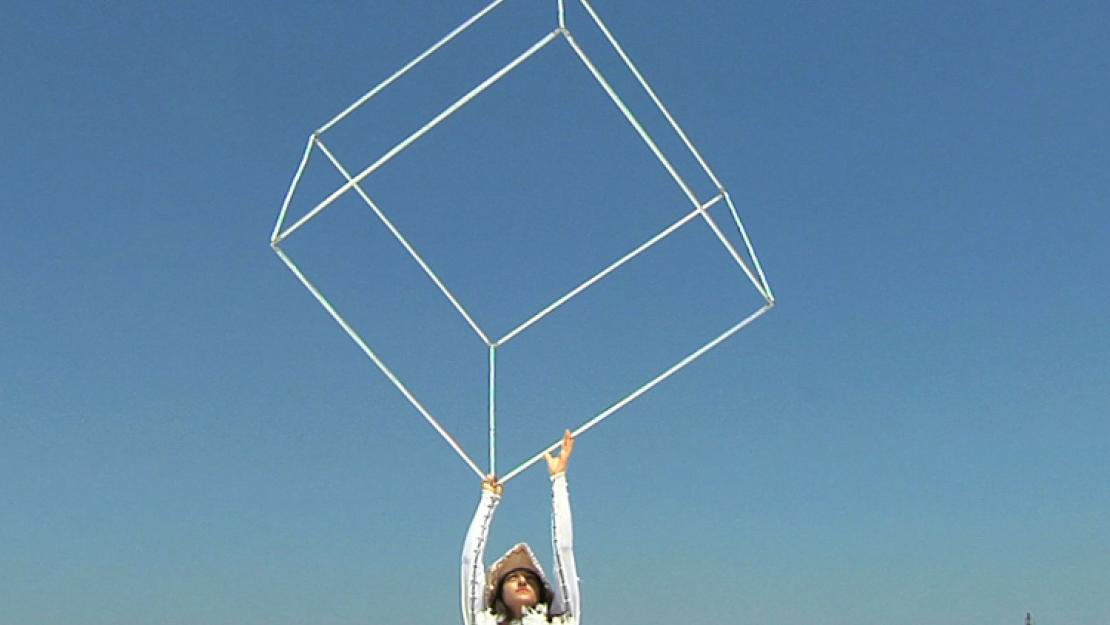 Alumna artist Malak Helmy ‘05 has opened her first major solo exhibition at AUC’sSharjah Art Gallery. The exhibition, Lost Referents of Some Attraction, interacts with the site of AUC’s campus in New Cairo through a variety of art forms, including text, film, audio and three-dimensional objects. “Two of the themes that repeatedly appear in my work are desert cities and compounds be they educational compounds, workers' compounds, or leisure compounds like resorts," explained Helmy. “These themes made sense within the context of AUC’s Sharjah Art Gallery. I was interested in situating the works into the body and codes of the gallery itself, to have a conversation with its architecture.” Helmy refers to AUC’s architecture and its desert city through her art. The white triangular platforms dotting the first floor of the exhibit, for example, are “like the objects forming the triangle pattern on the gallery floor, as if those patterns were shadows imprinted into the marble ground,” Helmy notes. She also refers to features of AUC in the audio and visual aspects of the exhibit. “The fountain as a form keeps appearing at AUC, and I was thinking about elements of those forms and what they suggest when putting things together," Helmy explained. "Why are there these necessary forms of fountains and neo-Islamic shapes in these new compounds? I find their decorative function also somehow sinister, as if they are erasures of something, there to distract." What is notable about Helmy’s work is that it is multifaceted and goes beyond traditional art forms. Lining the walls of the exhibit, for example, are snippets of text on light-sensitive photo paper, a work originally written in 2010 and titled "Statements from the Compound." “The text is about a semi-fictional compound; it references texture, things that are unfixed and the absence of memory,” Helmy explained. “As the text gets exposed to the light, over time, the words disappear.” While climbing the stairs to the second level of the gallery, the exhibit features an audio track that was recorded during a carrier pigeon’s flight to several locations in the Western desert and the Mediterranean, including an old port near Alexandria. “What we recorded is the sound of air, wind, insects and waves, and it becomes an environmental work that works well in the Sharjah Art Gallery, in that pathway, because that work is about locations that have fallen out of existence, that have become unhinged,” Helmy said. Kaya Behkalam, director of the Sharjah Art Gallery, noted how all of these pieces come together to form a sensory experience. “The fragments of videos, sounds, texts and images that are dispersed throughout the gallery space are referents,” he explained. “They are elements of a longer poem that expands in space and time as a holistic experience.” Helmy’s exhibition marks the launch of Sharjah Art Gallery’s AUC_Lab, a new series of exhibitions and projects by artists from the region, organized in collaboration with local partners. “We started this new series to strengthen the ties between AUC and the vibrant art scene in Cairo,” said Behkalam. “We wanted to provide an institutional and academic framework for the art scene here and have prolific artists connect with our students. So we decided to bring some of the key protagonists to campus and involve them directly.” In addition to Helmy’s exhibition, Sharjah Art Gallery’s AUC_Lab will also host events by internationally acclaimed artist Hassan Khan, also an AUC alumnus. Behkalam hopes that these artists can help inspire students at AUC. “Malak and Hassan are among the most promising artists of their generations – and they are both AUC graduates,” Behkalam said. “Their work is also inspiring because it is so multifaceted and embraces a wide field of art practices, such as text, sound, video and sculpture. Our students can learn a lot by observing their practices and careers.” While connecting to students, Behkalam also hopes to build a network between AUC and local partners. Helmy’s exhibition was curated by Beirut, an art initiative and exhibition space in Cairo. “We are trying to draw on existing networks and at the same time make these institutions more aware of the University and its resources,” Behkalam said.